At every point of the movement to establish Indigenous Peoples Day in Berkeley, indigenous peoples used respectability politics. Marginalized groups use this organizing strategy to demonstrate that their social values are compatible with “mainstream” values in an effort to secure rights for themselves.

At the 1977 United Nations-sponsored International Conference on Discrimination Against Indigenous Populations in the Americas, indigenous peoples recognized a shared history and legacy of colonialism and imperialism and shared hope for the possibility of collaboration in building a future by passing a resolution for an International Day of Solidarity with Indigenous Peoples, the inspiration for Berkeley’s 1992 celebration. 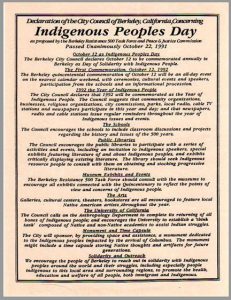 Berkeley City Council approved the “Declaration of the City Council of Berkeley, California, Concerning Indigenous Peoples Day” on October 22, 1991. Indigenous Peoples Day was established as a day of remembering, education, and celebration as well as offering an opportunity for collaboration and education on a wide range of social justice issues and building solidarity within the local community. 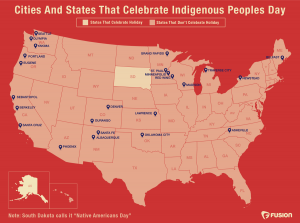