Featured Image: The featured image is from a 1970 anti-war protest by Vietnam veterans of multiple races. The veterans standing at the front are holding a sign that reads “We won’t fight another rich man’s war!!!”

The United States entered the Vietnam War to combat the spread of communism to the surrounding countries. Widespread opposition began in 1964 when the media exposed high civilian mortality at the hands of U.S. bombings. People realized the United States was motivated by imperialism rather than freeing the Vietnamese. Anti-war sentiments were created through allyship. Protestors rejected nationalism and saw themselves as members of a global community. The West had declared socialist governments as the enemy, but non-white Americans knew that their true enemy was the white supremacy they experienced at home.

Muhammad Ali, American boxing champion, used his visibility to speak on topics such as white supremacy, racism, and lack of religious freedom in America.

Solidarity is important because marginalized people are pitted against each another to prevent collaboration. Solidarity represents people acting selflessly, so the U.S. government portrayed protesters as selfish draft dodgers. Their version of history erases activists’ critique of U.S. imperialism and their solidarity efforts. This exhibit aims to bring their narratives to light by sharing a few of their stories. 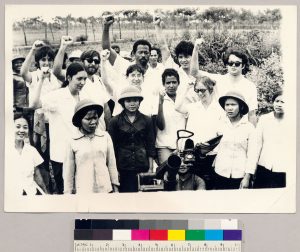 The Trials of Muhammad Ali – A documentary directed by Bill Siegel documenting Ali’s boxing career, conversion to Islam, and protest against the Vietnam War.

Radicals on the Road: Internationalism, Orientalism, and Feminism During the Vietnam Era – A book by Julie Tzu-Chun Wu on the U.S. People’s Anti-Imperialist Delegation’s work abroad.