The featured image above is one of the many murals from the Chicano Park. The image contains the date of the creation of the park along with other murals in the background. Source: Archtoberfest San Diego. “Chicano Park Tour.” Chicano Park Tour. Archtoberfest: San Diego Architecture and Design Month, 08 Oct. 2016. Web. 14 Dec. 2016 <http://www.archtoberfest.com/event/chicano-park-tour/>.

The Chicano Park Steering Committee (CPSC) was formed in April 1970 after the construction of the San Diego-Coronado Bridge displaced about 5,000 families out of the area in 1969. The San Diego Highway Patrol was planning to build a parking lot along with the bridge, but the community occupied the lot with the help of the CPSC.

Members of all ages in the community came together for the first time to take over the park, garden and paint murals. The CPSC was created by Chicano activists on behalf of the Logan Heights community to help develop and expand the Chicano Park in a way that honors Chicano, Mexican, Indigenous culture.

The CPSC helped spread awareness in many ways, one tactic was through coloring books. Coloring books helped inform the community members of all ages about the park, who the park was for, and what the park represents for the them. 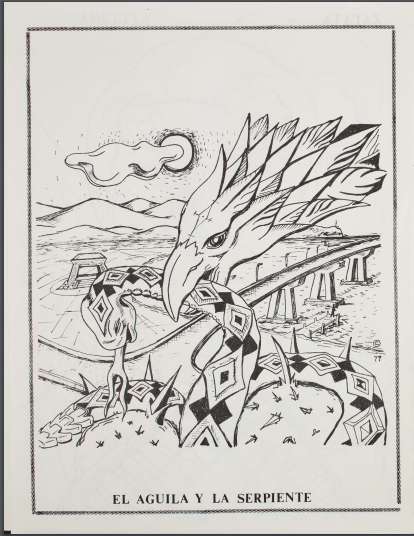 The CPSC published this illustration in their 1977 coloring book edition. It centers the symbol from the Mexican Flag of the eagle and the serpent which alludes to the Aztec legend of Aztlán. The Aztec god Huitzilopochtli told the Aztecs they were going to find their new home when they find an eagle eating a serpent perched on a cactus. 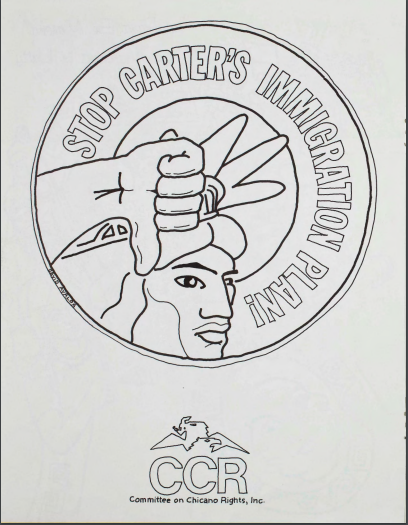 The CCR (Committee on Chicano Rights) another local organization asked in 1978 the CPSC to feature this illustration in their 1978 coloring book in order to inform community members to help fight against the Carter Immigration Bill. The Bill ultimately passed and increased unemployment, exploitation, and militarization at the border against immigrants along with limiting amnesty.