An Examination of Cultural Authenticity in Transpacific Culture 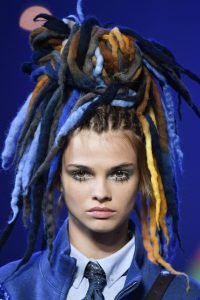 The writer Tom Bissell said “there would be fewer wars if more novelists allowed themselves to imagine themselves into other cultures”. However, despite the benefits of cultural exchange and boom of creative third world culture, cultural appropriation is simultaneously becoming a hot topic. Why are countless acts called out as cultural appropriation, and what criticisms are said about them? What are the boundaries between offensive and beneficial transpacific culture?

Even with the purest of intentions, creatives in fields such as fashion, cuisine and music are susceptible to committing cultural appropriation. I agree when Amandla Stenberg, a young actress known for her leading role in the movie Hunger Games, acknowledges the non-binary relationship between cultural appropriation and third world culture created through cultural exchange.

The line between cultural appropriation and cultural exchange is always going to be blurred. 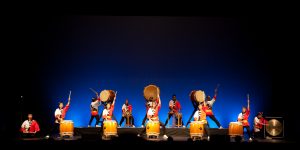 A great example of third world culture in Transpacific culture is Kumi-daiko which caused the Taiko Boom in the US and internationally. The development of Taiko as a globally popular art form reveals the strengths that cultural exchange can bring.

Traditionally, Taiko was a relatively niche Japanese musical performance. However, a jazz drummer named Daihachi Oguchi, transformed Taiko by breaking the traditional single performer and assembled a taiko drum ensemble. A completely new iteration of taiko known as Kumi-daiko was created, and this new taiko became widely popular in the 1970’s, thus starting the Taiko Boom in the USA.

By incorporating his alternative knowledge of American Jazz to create an alternative vision of Taiko, Oguchi was successful in creating a culturally influential and popular phenomenon that is accessible to be enjoyed by an exponentially larger public. Not completely different from the way that greater genetic diversity creates more genetic fitness, the mixing of different cultural practices brings significant strengths to a cultural phenomenon. In the case of Taiko, cultural exchange was used to develop a new more popular form of art that was able to reach a greater mass audience. 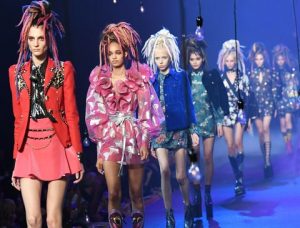 An example of cultural appropriation in current Transpacific culture is the use of black dreadlocks by the white population which was the point of great controversy in Marc Jacob’s spring 2017 collection at New York Fashion Week. The controversy was spurred when Marc Jacob casted “predominantly white models to walk down the runway wearing dreadlocks made of wool.” Marc Jacobs was met with plenty of of criticism that accused his collection of cultural appropriation.

The potential harm that cultural appropriation can inflict on minority cultures is made visible by this particular example of white people wearing dreads. As a white woman who previously wore dreads explains the issue in her own voice,

When white people in the US wear dreadlocks, the power of this symbolic resistance is reduced to an “exotic” fashion trend wherein the oppressor is able to ‘play,’ temporarily, an ‘exotic other’ without acknowledging or experiencing any of the daily discriminations black folks have to face.

The focus here is the fact that white people can avoid the discriminations that black people face daily: While dreadlocks on black people were penalized and inflicted violence towards them as a minority ethnic group, the white woman who wore dreadlocks “was still considered employable and trustworthy.” She quotes on her personal experience: “I was often given positions of authority over my co-workers of color… that can only be attributed to my whiteness.”

Three major differences between cultural exchange and cultural appropriation can be found through examining kumi-daiko to white people wearing dreadlocks:

In the instance of the appropriation in Marc Jacob’s collection, the dreads are not unique, nor are they different. It’s white people wearing the same exact hairstyle of black people.

While third world culture is rooted in a deep respect and an encompassing understanding of the culture in which they are borrowing from, culturally appropriative acts substantially lack this. Kumi-daiko was developed through Oguchi’s deep understanding of both Taiko and Jazz practices, and his creative intuition to combine elements of the two together. Comparatively, white people wearing dreads largely lack an understanding of the significance of dreadlocks to the struggle for black empowerment and equity in America.

3. Third world culture does not harm a minority culture.

An important basic characteristic when considering the harmful effects of CA, is to remember that it is not the majority that is offended, but the minority. As author and philosopher James O. Young examines in his investigation of the moral issues regarding cultural appropriation, cultural appropriation is determined by “whether cultural appropriation is freely tolerated [by] the minority culture.” Young emphasizes the importance of the minority culture’s experience in determining if an act is benign or harmful. The existence of an unequal power dynamic through a dominant culture group, and a less privileged group is a key ingredient in culturally appropriative art forms. In the example of dreadlocks, this unequal power dynamic results in a group of pioneering minorities, and the whites that ultimately receive credit for it:

When the dominant group appropriates, they are deemed innovative and edgy, while the disadvantage group they borrowed from continued to face negative stereotypes that imply that they lacking in intelligence and creativity.

Through understanding the distinctions between culturally appropriative acts and third world culture, we can continue to confidently create new culture that is enriched by the intellectual property of those who came before us. The ability to discern between the two murky categories will help the maximization of beneficial cultural exchange by minimizing unintentional acts of cultural appropriation.