In an era of food trends and popular food TV shows, celebrity chefs have the ability to teach their audiences and clientele about foreign foods and by extension, the cultures they represent. In many ways, Chinese native Martin Yan can be considered the first of his kind: a Chinese-American cooking on PBS about Asian foods, reimagining the celebrity chef status that Julia Child and Graham Kerr helped establish to include an Asian chef.[1] In recent years, Americans have watched on television as Asian-American chefs like Dale Talde and Niki Nakayama have risen to fame both at home and abroad. These three celebrity chefs – Yan, Talde, and Nakayama – have pushed the boundaries of Asian foods in America by introducing and popularizing new cuisines in a way that has contributed to the growing appreciation of Asian cuisines and their practices.

Born in Guangzhou province in Southern China to a grocer mother and restaurateur father, Yan moved to Canada to further his culinary studies in the 1960s. While living in Calgary, he began his career as on-air celebrity chef in 1978 when he was asked to appear on a local news channel to teach Chinese cooking lessons.[3] Since then, the Yan Can Cook show has become “one of the most popular cooking programs on public television,”[4] shooting more than 1,500 episodes.[5]

In an interview with Food Republic, Yan said that he has stayed in the food-show industry out of passion: “I continue to enjoy what I do… and I don’t just do shows in English; I do them in Mandarin and Cantonese, so I reach a lot of people. I love to share; I love to teach.”[6] With his thick accent and humorous demeanor, Yan “is dedicated to dispelling the mysteries of Asian cooking, and furthering an understanding of the cultures that created these cuisines.”[7]

Yan’s celebrity status speaks to his abilities as a chef and entertainer. Through his appearances in television, cookbooks, and cooking classes at various culinary institutions, Yan has successfully instilled in his followers the beauty of Asian cooking, and expanded the American culinary discourse to include Chinese cuisine. Since Yan, Americans have watched as celebrity Asian chefs like David Chang, Roy Choi, Dale Talde, and Danny Bowien have risen to the top at unprecedented levels, extending the American purview to include Asian foods.

Born and raised in Chicago by first-generation Filipino parents, Talde began cooking at home with his mother in the kitchen. After graduating from the Culinary Institute of America and working at several well-known restaurants, Talde made his TV debut starring on Top Chef: Chicago, and later competed on Top Chef: All Stars. In 2012, he opened his first restaurant Talde in Brooklyn.[8] 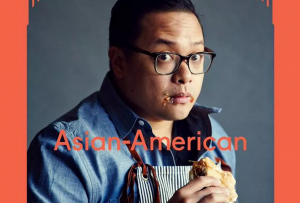 Talde’s recipes and the foods served at his restaurants reflect his distinct Asian-American experience: growing up immersed in his Filipino cultural heritage whilst also enjoying the life of a typical kid living in Chicago and later in New York. One such example of Talde fusing his identities can be found in his cookbook Asian-America, which features “proudly inauthentic recipes from the Philippines to Brooklyn.”[9] Talde’s Kung Pao Chicken Wings merge a staple American food item, chicken wings, with a “sweet-tangy sauce modeled on kung pao chicken, or at least the Sichuan classic as loosely interpreted by a Filipino kid from Chi-Town.”[10] In an interview with Bravo TV, Talde described the inspiration behind Talde restaurant in Brooklyn: “I walk to Chinatown in Brooklyn, and you could be in Mainland China. You can’t help but be inspired by the live fish and whole pigs.”[11] His food serves as a “manifesto of immigrant belonging,” combining the Filipino cuisines he learned from his family with the interactions and experiences he has had living in America.[12]

Talde writes that his food “is meant to remind you that you’re home, in that strange and awesome country where we live.”[14] By blending Eastern and Western cuisines and techniques, Talde, his restaurants, and cookbook showcase the possibilities of Asian-American food.

Unlike Yan and Talde, Nakayama is a woman and specializes in Kaiseki, a traditional Japanese culinary practice, which has historically been the domain of men.[15] Born and raised in Los Angeles, California, Nakayama did not learn how to cook at home with her parents. Rather, it took a trip to Japan to expose her to the various Japanese cuisines for her to realize her passions for food.[16]

In 2011, Nakayama opened her now famous n/naka restaurant in Los Angeles. N/naka offers “the artistic and technical notions of kaiseki to create an ever-evolving seasonal narrative within each meal.”[18] The evolving tasting-menu served at n/naka reflects the traditions of kaiseki, which requires fresh and seasonal ingredients. Kaiseki cuisine, in many ways, represents Japanese high culture in the world of food by showcasing wholehearted Japanese hospitality. This multi-course Japanese meal, composed of beautifully plated dishes made of seasonal and local ingredients, was originally presented to the royal noble classes of Japan.[19] In some respects, kaiseki is the model for the contemporary tasting menu phenomenon. While at first Nakayama wanted to recreate the experiences available in Japan, after a few years at n/naka, she switched from importing most of her ingredients to locally sourcing them from California’s abundance of fresh produce. Nakayama describes this transition: “[O]ver time, I recognize how wonderful it was to focus on what’s around me.”[20] Like Talde, Nakayama fused the local with foreign concepts, creating beautiful and sensational dishes. Since opening n/naka, Nakayama has been featured on Netflix’s Chef’s Table, and n/naka has received numerous rave reviews from highly recognized food critics and publications.[21]

In studying transpacific popular culture trends, the popularity of novel foods and chefs provides a lens into the ways that Americans have welcomed new migrants and the cultures they represent. Yan came to the Americas in the 1960s and his show can be contributed to the rise of Chinese food beyond simply representing the take-out joints dispersed throughout America. He has helped teach Americans about Chinese food and Asian cuisines at large. While in many ways, Yan’s success has already been realized in the sheer numbers of his viewership, Talde and Nakayama are still fairly new to the international food scene. However, the fact that Talde has launched various restaurants and published a cookbook shows that Americans have moved away from simply eating Chinese food and extended their palates to include an assortment of Filipino-inspired cuisine too. Talde’s popularity speaks to the growing possibilities Asian foods have amongst an American clientele. The launch of n/naka further serves to represent a growing sophistication of Asian food in America. These three chefs have helped spread Asian cuisines throughout North America through television, restaurants, and cookbooks in a way that has gauged American interests and represents the evolving status of Asian cuisines in America.