Recently, food has become a commodity to be capitalized upon and has become a form of entertainment.  Cooking shows and gastronomic tourism shows have taken up a significant and growing place on television.  Eddie Huang’s television show on Vice, Huang’s World (formerly known as Fresh off the Boat), features Huang’s travels and explores foods and cultures around the world.  Huang’s show follows a host of other television shows such as Andrew Zimmern’s Bizarre Foods and Anthony Bourdain’s A Cook’s Tour, in which chefs venture to faraway lands to try different foods and expand their palates.  These shows seems to play into orientalist perceptions of Asia and the desire for authenticity which Robert Ku describes as “a shared longing for a return to a more delicious past, a gastronomic golden age just out of reach” (Ku 2).  However, Huang’s show complicates the landscape of food by pushing back against oppressive notions of orientalism and authenticity and attempts to foster the creation of an Asian American sensibility. 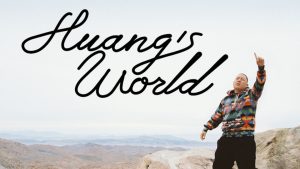 Eddie Huang is the son of parents who immigrated to the United States from Taiwan.  He grew up “obsessed with food, basketball, hip-hop, weed, fighting and sneakers” (Young, “Huang Time Coming”) all of which play a role in his show.  Throughout his life and career, Huang has taken a very unique path; he worked as a corporate lawyer before working in comedy, running a marijuana business, and designing clothing.  More recently, Huang started a Taiwanese bun shop, BaoHaus, and also published a memoir, Fresh Off the Boat, which inspired a television show with the same name.  In 2016, Huang’s World, premiered on Viceland.  In the show, Huang travels to different cities in the United States and around the world, “trying to show the world the places, the people underrepresented, give them a voice, give them a platform, tell the story through food” (Huang’s World).

Huang’s World is a refreshing departure from the orientalist tradition of other television shows engaged in culinary tourism.  Huang’s intents behind Huang’s World differ from Bourdain’s intent to exploit foreign flavor experiences for entertainment and for his career, and his personal background and Taiwanese American identity are a central part of the show.  In an interview with Stephen Colbert, Huang described Huang’s World as a “Trojan horse show” in that “people want to see food, they love food porn on TV, they want to laugh. . . but if there’s one thing I want people to understand, it’s that we’re a lot more similar than we are different”.  Although Huang sometimes plays on exoticism for shock value in his show, Huang’s overarching goal is to portray cultures as they are and let people speak for themselves.  Eddie Huang uses food as a starting point for conversations about culture, identity, politics, and history.  Huang’s World also uses food as a tool for constructing identity.  Through the context of food and culture, Huang presents a form of ethnic, cultural, and racial identification which does not conform to discrete categorizations.  When analyzed within a tradition of other food shows, Huang’s World is a rebellious departure from typical perspectives and intentions behind such shows.  By resisting dominant Western imaginations of Asian foods and cultures as exotic dubious, inferior, and ahistorical, Huang’s World demonstrates Huang’s belief that “food absolutely can and it should be rebellious” (Huang’s World).