The Modern Ao Dai: Alterations By The West

How can the Vietnamese national costume, the aoi dai, introduced nearly 250 years ago remain a common fixture at upscale events as well as in daily life?3 How can this garment, initially introduced to differentiate political ties, now unify people within its once divided country and across the Pacific Ocean? The ao dai’s remarkable ability to evolve in response to the time and place is nothing new. Its inception, in fact, was closely tied to the time and place in which it was first introduced.

In 1774, under Lord Vuong of the Nguyen dynasty’s reign, the ao dai was created. Its design intentionally drew from the culture of the Cham, indigenous people who were displaced when Nguyen Lords conquered their provinces, in hopes of showing them respect. The ao dai had further political significance, as Lord Vuong’s courtiers wore the outfit to differentiate themselves from their northern rivals. 1 Since the 18th century, the ao dai has undergone several revisions that have brought notoriety at global level through the Miss International Contest of 1993 during which it won “The Most Beautiful National Costume” and through fashion collections by Vietnamese American designers.2 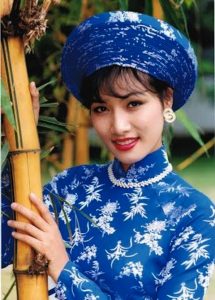 Truong Quynh Mai in “The Most Beautiful Costume” 1997

During the 20th century, Vietnamese designers began importing ideas from French fashion. Designers narrowed the waist and hips of the ao dai in the early 1900s and even shortened the tunic’s tails to the knees in response to 1970s Western fashion.2 Such design alterations were supported by key political figures, such as Madame Nhu who was often photographed in ao dais featuring short sleeves and boat-shaped collars. In an interview, she noted that “It’s very hot in Saigon. So when I wear Ao Dai with open collar, the President was not satisfied.”2  It would seem that the ao dai’s design was never meant to remain stagnant. It bends to the will of pragmatism and has adapted as the Vietnam’s ties to the West have grown. 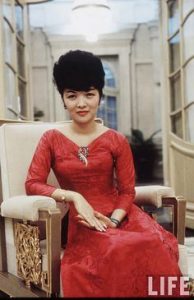 Across the Pacific, Vietnamese American designers today have continued to modernize the ao dai. Since 2013, Viet Fashion Week has been hosted annually in Westminster, California. During this event, Vietnamese American designers are given the opportunity to showcase ao dais in addition to Western wear.5 As described by the founder, Pham, the “goal [is] to preserve our culture and art through fashion.”7 This preservation, however, does not hold designers back from experimenting with new fabrics and cuts 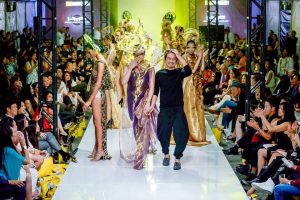 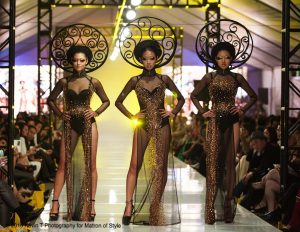 One such designer, Calvin Hiep, took a unique approach with his Dripping Gold collection, fusing Western and Vietnamese designs to create avant-garde pieces. His sheer, bedazzled tunics worn over black body suits, velvet leggings, and one-shoulder tops are drastically different from the traditional silk, long-sleeved ao dais. Hiep’s more revealing pieces may come as a shock to some, but there is much admiration in the Vietnamese American community for his work. Therefore, I would venture to say that he is not appropriating Vietnamese culture in designing his collections; rather he is drawing inspiration from Western style trends to innovate the ao dia. 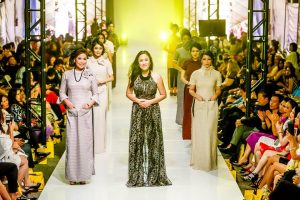 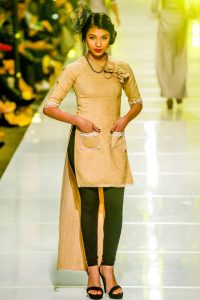 Christy Pham is another Vietnamese American designer modernizing the ao dai. Pham’s Spring/Summer 2016 incorporates many traditional Vietnamese ao dai aspects, such as the floral motifs and wide legged, light-colored silk pants, but also modernizes the design with tweed fabric and leggings. Her short, beige tweed tunic is an example of Western influence on traditional Vietnamese design. Moreover, with the shortened front, it is rather similar to the popular high-low dresses.

“the idea of modernizing the traditional dress has been around for a while, but American designers took it to a new level” – Viktor Nguyen-Lieu

As the Creative Director of Viet Fashion Week, Viktor Nguyen-Lieu, described, “[t]he idea of modernizing the traditional dress has been around for a while, but American designers took it to a new level.”7  Drawing appropriate inspiration rather than inappropriately appropriating another culture, many Vietnamese American designers have successfully created collections that reflect both their Vietnamese heritage and their current American home.