Filipinos make up the second largest Asian demographic in the United States, yet its cuisine is absent from the US marketplace. Today we see an increase in Filipino restaurants, as well as Filipino fusion dishes and restaurants. Is Filipino food finally making its way into the American foodscape? Addressing this question requires an understanding of Filipino-American history and knowledge of Filipino food.

US Asian-American Population, 2011. Shows FIlipinos to be 2nd largest demographic

Eating communities in immigrant populations are formed from the desire to live amongst each other to help with transitioning into the new culture and use their native language while learning English. The early 20th century Filipino immigrants who were mostly farmworkers and laborers were recruited from different regions of the Philippines. Because they spoke different languages and dialects, communication among them was limited. 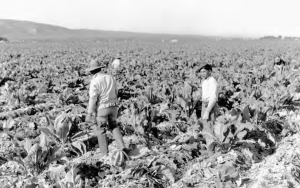 Filipino farmworkers in California during the 1930’s. (Library of Congress)

On the other hand, the Filipino immigrants in the mid-60s were highly skilled professionals who knew how to speak English. This meant less of an emphasis on having to live within a Filipino community, as acculturation and assimilation came easier. Additionally, starting a business was not a priority as they had jobs and salaries waiting for them in the United States.

80% of Filipino dishes are said to be of Spanish origin and therefore, it can be argued that Filipino cuisine already has an indirect presence in the US foodscape. The Philippines, once a Spanish colony, was also occupied by a number of different nations. Filipino cuisine is reflective of that history, however those other nation’s cuisines have made more headway into the American marketplace. People therefore fail to appreciate Filipino cuisine’s distinctiveness because its similarities with other cuisines are what are highlighted.

There is a movement called “The Filipino Food Movement” which was founded “to create broad awareness, appreciation, and enhanced investment in Filipino Culinary Arts”. Food plays an important role in a people’s culture and it is about time Filipinos claimed their space in the American culinary world. Although it is gradual, the fact that there is significant effort invested into the promotion of Filipino food and thus, culture, makes one hopeful. Filipino food is at the stage where it is still trying to find its place in the American dining scene and this is reflected by the range of Filipino establishments that currently exist in the US.