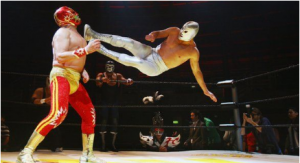 Lucha Libre has become ingrained as a symbol of Mexico’s national identity. It was first introduced following the establishment of the Consejo Mundial de Lucha Libre in 1933. The Consejo Mundial de Lucha Libre, which is regarded as the oldest professional wrestling promotion, was founded by Salvador Lutteroth after having witnessed live wrestling matches in Eagle Pass,Texas. (Levi.) The popularization of the sport within Mexico, was eventually followed to the mass consumption of televised professional wrestling in countries abroad. The spread of professional wrestling in countries such as Japan and the United States,and the medium used to reach audiences within these regions, is closely related to discussions of legitimacy surrounding the sport.

Debates on whether lucha libre can appropriately be categorized as a sport are a core component within discussions over what constitutes an authentic representation of the recreational activity.  Many believe that categorizing the sport as merely theatrical is dismissive of the rigorous training required in becoming a wrestler.  The fighting styles used are often described as a mix of Olympic wrestling,Greco-Roman wrestling,karate and jiu jitsu.  The more a wrestling match features the capabilities of the body, demanding combat techniques, and the rigorous training that goes into becoming a wrestler, the more authentic it is. (Levi.)

In the early 1950s wrestling was televised within Mexico but was quickly taken off the air from 1954 to 1991. Historically the sport has been primarily consumed through live events which as resulted in matches being closely tied to the region’s culture and geographical context. In Japan and the United States, however, professional wrestling is mainly distributed through broadcasting. Professional wrestling in Japan is best known as “Puroresu”. It was first introduced by legendary wrestler Mitsuhiro Momota in the early 1950s who was often depicted as beating American wrestlers amid the anti american sentiment present in Japan after WWII. (Levi.)

Professional wrestling gained national attention within the United States after the creation fo the World Wrestling Federation in the 1980s. The televised version of the sport, especially within the United States, has a stronger focus on theatrical spectacles. The televised version, and consequently wrestling outside of Mexico, of the sport is often viewed as less legitimate. There is specific regulations imposed to make sure that televised professional wrestling is appropriate for younger audiences. The regulations may limit wrestlers from executing dangerous maneuvers that would feature the training that is needed to become a wrestler. (Mazer.) 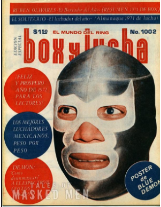