Menu
Browse: Home   /   “Marimar” and other Mexican Telenovelas in the Philippines

“Marimar” and other Mexican Telenovelas in the Philippines

Marimar was one of the first Mexican telenovelas, or “Mexicanovelas,” imported to the Philippines. It rose to unrivaled popularity—ratings peaked at 61.7% and the show spawned not one but two Pilipino remakes. Thalia, who plays the titular Marimar, was even greeted by President Ramos himself when she visited the Philippines. But why would a Mexican show grow so popular in the Philippines, all the way across the Pacific Ocean?

This is often traced to the two countries’ shared history and culture. Both were colonized by Spain, and both are affected today by the neo-colonial1 regime of the United States. This makes for a lot of cultural similarities: widespread Roman Catholicism, Spanish names, dishes like adobo and lechon. But the effects of colonialism go deeper. One of these deeper effects is economic status. Spanish colonizers extracted resources from both countries, and the United States has continued that legacy by exploiting Mexican and Pilipino workers for cheap labor. Poverty in both countries is widespread, but until recently, depictions of poverty were not common on Pilipino television. Meanwhile, Marimar was unafraid to show it. ”It’s different from our soap operas… She has the same problems we do. It shows the discrimination against poor people,” one interviewee for the New York Times said in 1996.2 Because of this, Marimar was able to gain a wide audience among the lower and middle class of the Philippines.

Another deeper and more insidious effect of colonialism is the colonial mentality adapted by colonized people, in which they feel inferior to the people who colonized them. One way this manifests is through colorism and the sentiment that whiter means better. There is a large market in the Philippines for skin lightening creams and soaps, for example. Marimar, with her light skin, sandy brown hair, and hazel eyes “capture[d] the imagination of a typical colonial-minded Filipino.”3 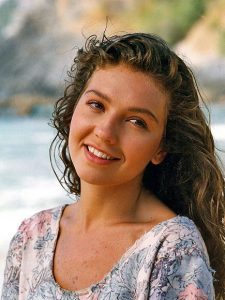 Marimar fulfilled a variety of colonial standards of beauty, but this alone doesn’t make sense—why not just import an American show with an all-white cast? Wouldn’t the unrealistic standard of beauty make Marimar less relatable? The answer may lie in the language. Spanish, once widely spoken, has now been replaced by English. This means that American shows don’t need to be dubbed, but Spanish shows do. Marimar was dubbed in the native national language of the Philippines, Tagalog. So, unlike in American soaps where everyone spoke English, or local teleseryes where often the poor who spoke Tagalog while the rich spoke the more “intellectual” English, in Marimar, everyone spoke Tagalog. To hear the native language spoken by these supposedly “superior” people—white people and rich people— had a profoundly positive effect on the audience.

In the end, Marimar‘s success goes deeper than a superficial similarity of culture or language. These things made the show accessible, but the less visible results of Spanish and US (neo)-colonialism, like the economic realities and shared colonial mentality, made it relatable on a deeper level. This isn’t to say that Spain and the US hold all the power in binding these two countries together, though. If anything, the shared history has opened the doors for cultural exchange and allowed for the creation of solidarity in new, non-traditional ways—like how Marimar was able to create national pride through the positive portrayal of Tagalog.

1 neo-colonialism is when powerful countries control other countries through money and culture instead of through colonialism, which uses military or politics.