Noodle Soups in Context: Capitalism, Colonialism, and the Carceral State

As a favorite article about saimin puts it, “pulling noodles out of soup is a near universal joy.” While the delight of slurping noodles may be universal, turning our attention to the way these dishes have been produced through systems of exchange reveals the uneven and localized distributions of power and labor on a global scale. I take up the histories of three beloved trans-Pacific noodle soups – Japanese ramen, Hawai’ian saimin, and Vietnamese phở – to analyze how they have been produced as comfort foods, survival foods, and national foods. In tracing their entanglements with capitalism, colonialism, and the carceral state, I intend to highlight how food has always been a part of survival under, and resistance to, the operations of power.

Invented in 1958 and widely considered Japan’s top worldwide export, the development of instant ramen is inextricably linked to post-World War II geopolitics, the rise of communism, and American intervention abroad. The insistence on wheat noodles seems like an anomaly in a cuisine that otherwise favors rice as a staple, were it not for the massive amounts of wheat flour funneled into Japan by the U.S. food aid program, which sought to groom postwar Japan as an ally against the rising communist powers in Asia.

Instant ramen’s highly processed deliciousness aligns itself with foods such as SPAM, becoming objects of fond nostalgia despite their seeming industrial unwholesomeness. Instant ramen shares a parallel history with SPAM in particular, as both find origins in the expansion of the American military project. We might read both as having been reappropriated, by those subject to militarism, into popular comfort foods. In another style of reappropriation, lovers of instant ramen often proclaim their love for it because of, rather than in spite of, its highly processed nature. The dehydrated powder flavoring of salt and fat that flavors every cup of instant ramen may not be immediately intelligible, but it is its own brand of delicious – and thoroughly lovable for generations of Asian Americans who grew up on the stuff.

Instant ramen has long been associated with popular, even proletariat food, particularly as the domain of the stereotypical broke college student. Yet the rise in higher-class ramen bars serving up $15 bowls seems to shore up a more wholesome, illustrious food with a national heritage – perhaps separated from its instant counterpart by its seeming transparency when it comes to the process of production. Like the California roll, instant ramen begun as a luxury and a novelty, but has now become widely perceived as an inauthentic version of a more recently resurgent national food, embodying a certain classed and Westernized notion of “authentic” Japanese cuisine.

Instant ramen takes on another resistive element in its role as currency within American prisons. Instant ramen is not only prized for its deliciousness in itself, but also for its ability to become part of a collective experience of cooking and eating within the scarce and precarious environments of the prison. As these environments grow increasingly hostile, such collective experiences of sharing food become ever more precious, reminding us not only of the deeply affective and communal dimensions of food, but also the continuity between conditions of incarceration, colonialism, and war.

Often compared to ramen, this beloved Hawai’ian noodle soup bears witness to histories of colonial interaction from the get-go. The wheat noodles, fish broth, fried spam, kimchi, and linguica that alternately constitute the dish speak to the polycultural encounters between Japanese, Chinese, Filipino, Korean, and Portuguese laborers in Hawai’i’s early sugarcane plantations, between the American settler colonial project in Hawai’i and broader imperial pursuits in the Pacific. A popular “Stone Soup”-like origin story for saimin suggests that it was the result of several different plantation laborer families, all of different ethnic origin, contributing the ingredients they had on hand to a communal meal until something delicious and nourishing was formed.

This imaginary of a shared working-class, pidgin experience rooted in the plantation histories of Hawai’i’s immigrant groups seems to characterize the multicultural fusion of Hawai’ian “local food.” Another classic example is the Hawai’ian plate lunch, whose generous servings and modular components harken back to the lunches prepared for laborers at the end of a long day of plantation work. Undoubtedly, there is some element of colonial resistance in this vision of shared struggle and survival under the diminished conditions of colonial plantations and wage labor. Yet at the same time, Hawai’i is a site of intersecting colonialisms and imperialisms, and Asian immigrants are far from blameless in the continuing dispossession of Kanaka Maoli lands. At the point when an Asian immigrant majority is the group in power, what would the multicultural nationalism of Hawai’ian “local” culture and cuisine mean for decolonization, even when dishes like Kalua pig and lomi-lomi salmon make it onto the plate lunch menu?

To further complicate the question of food as both complicity and resistance, we might also consider the ways that Pacific Islander cultures have been commodified across the mainland as “tiki culture,” which draws its appeal directly from the faux-authentic menus of the Chinese restaurant tradition. In between mainlander claims to the aloha spirit, and Asian immigrant claims to Hawai’ian “local”-ness, what space is left for articulations of Pacific Islander self-determination?

A bowl of phở with sliced round steak and tendon. Credit: Serious Eats.

Phở has hit the Western mainstream in the past few years, and naturally has been subject to bastardizations that distort the dish beyond recognition – going from a beloved rice noodle soup topped with a combination of lean beef cuts and offal to, for example, a mound of quinoa and broccoli in broth. In response, Vietnamese Americans have defended the dish by emphasizing its importance to anticolonial survival and anti-authoritarian resistance, thereby cementing phở as a food that embodies Vietnamese national identity and its struggle for self-determination. 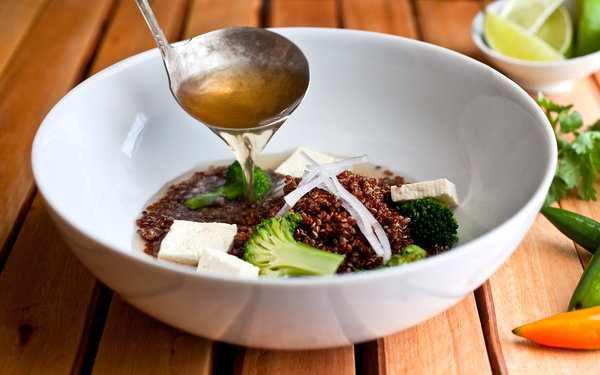 Described, to much outrage, as “Vietnamese-Style Soup With Broccoli and Quinoa.” Credit: New York Times.

The discourses of authenticity that surround phở, therefore, push back against Western appropriation by highlighting origin stories, of which there are many. In particular, Andrea Nguyen has framed phở as the delicious survival food made from the cuts left over when French colonizers butchered cows for steak, and again as the national food so beloved that phở vendors developed complex ways to sell it under the counter in a nationalized economy. This framing, again, suggests the role of deprived imperial conditions in shaping national attachment to, and nostalgia for, these noodle soups – and inversely, highlights the importance that particular foods have in symbolizing histories of resistance and struggle.

Wanting to assert a notion of authenticity against appropriation is not necessarily a conservative concept either. Though it may be necessary to highlight the singularity of phở in a Western context where it can be so easily distorted by white interpretations of “health food,” phở actually finds itself in constant conversation and exchange with a wide variety of Southeast and East Asian noodle and noodle soup dishes – from the rice noodles served in hủ tiếu, kuy teav, kuai tiao, and its many cognates across Southeast Asia, to the role of Yunnanese and Cantonese laborers in first brewing phở’s predecessors. Looking at phở’s development outside of the East-West dialectic, therefore, suggests to us the complexity and multivalence of exchanges within Asian cultures themselves, whether through migration on the continent or through the movement of labor across restaurant and service industry circuits in the diaspora.