What Is “American” Food?

Welcome to the final class project from our spring 2018 course, “Food in American Society and Culture” at Brown University. Co-taught by myself and Professor Richard Meckel, this course brought together eighteen students from various concentrations, years of study, and areas of the country and world—unified by a common interest to study food seriously, critically, and with all of our senses.

What is meant by the phrase, eating responsibly?

Each week, we read and discussed these questions and issues, which you can as well from our course readings.

Throughout the semester, we also asked:

This is a complex, contradictory, perhaps impossible, and notably polemic question. For example, our student, Charlotte Senders describes efforts to define American food as “a frustrating pleasure in attempting to uncover what it is exactly that’s in that great American melting pot,” while our student Dorinda Fong writes, “American food in a sense is undefinable, in the same way something is priceless, not meaning that it has no price but that it’s simply not possible to pinpoint a specific one.” Embracing this complexity, our student Solina Powell writes of American food: “Its definition is fluid and changes not only for individuals of different identities, but transforms as those individuals’ own identities develop over time.”

In addition to conducting their own original research projects, students in our course rose to the challenge to define American food through one of two assignment options. In the first, students wrote a restaurant review that reflected upon how the chosen establishment defined American food in whole or in part through elements like its menu, flavors, techniques, chef/cook and staff, décor, service, and mission.

Jacqueline Doan reviewed Emporium Pies in Dallas, considering how its “American” blend of modern and traditional elements is deeply influenced by conventional gender roles, from the menu to the decor to the shop’s marketing. Miranda Villanueva dined at The Beef Barn in North Smithfield, Rhode Island, which prompted her to examine the assumptions of whiteness that undergird typical definitions of “all-American” food as “steaks, fries, and apple pies,” despite how delicious she found them at the restaurant.

Reviewing her morning coffee at Blue State, Julia Christensen explored how the shop operationalizes patriotic consumer citizenship, as it synthesizes the personal, local, global, and political on its menu, in its decor, and through its mission. Considering the Dominican menu at D’Canela Cafeteria in Providence,Jesse Beller asserted that the infectious joy, abundance, and sense of home resonating on the menu, in the kitchen, and throughout the unassuming restaurant represent the best of American food.

In a second option, students conducted an interview with a person of their choosing in which they discussed views, perceptions, and definitions of American food. Accompanied by beautiful black and white photographs of her family, Solina Powell interviewed her mother, asserting from her title onward that immigrant identity is “the key ingredient to American food.” Curious to explore the role of her Asian-American heritage, Dorinda Fong interviewed her father, arguing in the end, “The line between distinctly American food, hybrid/fusion food, and Americanized ethnic food is simultaneously extremely fine and incredibly blurry.” Cynthia Kyin interviewed her mother on her experience as a Filipino immigrant, concluding, “The ability to afford food and to be full encapsulated America as an ideal for my mom. It was a glimpse into the larger picture of why she came to America. This experience is also reflected in the stories of many other immigrants,” such as those we read together in Hasia Diner’s Hungering for America.

Erin Miller spoke with her grandmother, who despite living in Puerto Rico, India, and China, defines American food as the midwestern fare she grew up eating—”hamburgers, cheese, and potatoes”—but with a deep respect for the “good food” of other countries. In an interview with her father, a nutritional epidemiologist, Talia Curhan discussed how the abundant choices that define American cuisine can be both liberating and overwhelming for eaters.

Nicholas Moreno scored an interview with television chef, restaurateur, and author, Michael Symon, who defined American food by its multiculturalism, abundant natural resources, and the consumerist quest for specific and often novel foods, asserting that American food will “just keep getting better and better.” Waylon Jin interviewed Philadelphia restauranteur Marty Grim, concluding that globalization, commercialization, and a diversity of perspectives have most influenced American food, and that “the whole of American cuisine is felt and is greater than the sum of its parts.”

Owen Parr interviewed a friend—who happens to be a recent Brown alumna and food studies student—discussing together the dynamics of power inherent in defining American food and its ongoing processes of borrowing, adapting, appropriating, and reimagining cuisine. In an interview with her roommate, Charlotte Senders explored “the ways that American values might (or might not) map onto the ways we grow, produce, and distribute food. Perhaps we are what we eat, but we are most definitely also where what we eat comes from, and how it was produced.”

I hope you enjoy reading these talented students’ full essays to see how they each tackled the complicated question of defining American food. 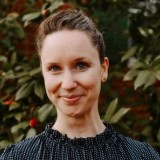