Welcome to the final class project from our spring 2017 course, “Food in American Society and Culture” at Brown University. Co-taught by myself and Professor Richard Meckel, this course brought together fifteen students from various concentrations, years of study, and areas of the country and world—unified by a common interest to study food seriously and critically.

And what is meant by the phrase, eating responsibly?

Each week, we read and discussed these questions and issues, which you can as well from our bibliography.

Rather than spending a single week on such a complex question, we pondered it for the entire semester, incorporating social media into our classroom. Four times throughout the term, students pinned an image to our class Pinterest board along with a 500-character caption that answered the question, “What is American food?”

This resulted in a buffet of responses, complementary and contradictory. And it’s no wonder why.

If you ever want to start a debate, just toss out the the question, “What is American food?” You’re sure to hear at least one person scoff that the United States has no food culture. Someone else might pipe up that a culinary tradition like barbecue is a unique American cultural food product, one that communicates a multiethnic history and both local and regional identity. Others will insist that the food traditions of New England form the culinary roots of American cuisine. Others will point to McDonalds and similar fast food joints known for selling burgers and fries as quintessentially American in taste, presentation, and capitalistic expansionism. Still others will argue that the United States is a “melting pot” of cuisines brought by old and new immigrants. Perhaps our food culture has been on a low simmer for hundreds of years, ensuring that all the food here in some way represents, absorbs, and communicates an “American” food culture.

Our students grappled with these various possibilities and mined our Pinterest board for key themes. Students then composed short essays defining American food, identifying three keywords that summarized their answers. 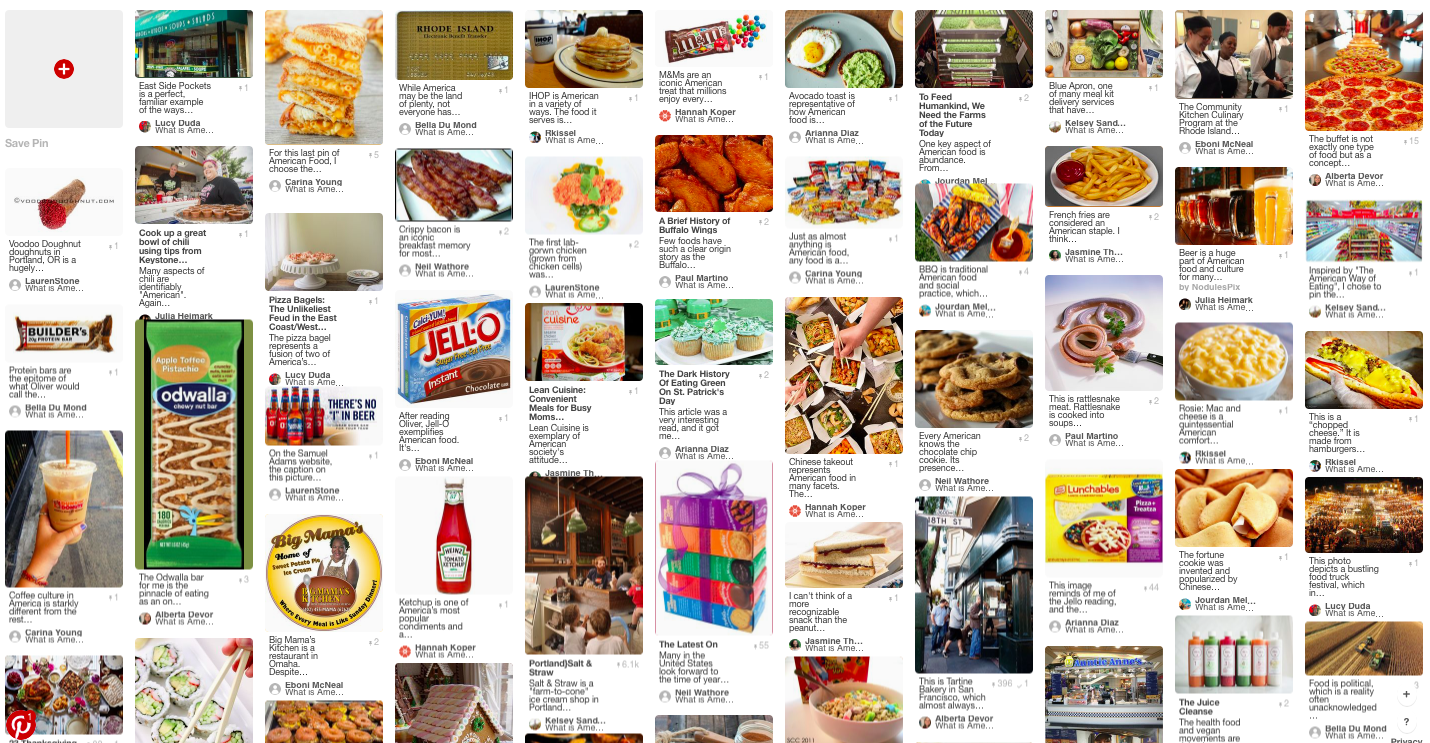 From our class Pinterest board, “What is American food?”

While a quick scroll through our blog’s homepage reveals the diversity of students’ responses, many essays emphasize how the history of immigration to the United States defined our food culture, particularly the proliferation of hybridized and fusion cuisines and dishes. Such foods incite complex discussions about community engagement, empowerment, and collaboration, as well as power, appropriation, and food justice.

Relatedly, students identified American food culture as one that is constantly reinventing itself and adapting. They see American food rooted in qualities like freedom, abundance, and limitlessness, as well as the forces of mass consumption, the latest food trends, and food media and marketing.

Students both indicted and celebrated American food culture for the ways it has embraced convenience and indulgence. Students also analyzed the contradictions inherent to American food culture, such as the commingling of abundance, hunger, and obesity; the oppositional relationship between freedom and restriction; and the preoccupation with both nutrition and decadent eating. Students analyzed what, how, when, where, and with whom we eat—and how it represents the complexity of “American food,” as well as “America” and “American.”

This is but a short summary of some of the themes that multiple students called out specifically. I hope you enjoy reading their essays to see how they each tackled this complicated question and defined American food.

Class photo taken on a field trip tour of the Providence Public Library’s food history exhibit, “On the Table,” led by Kate Wells.