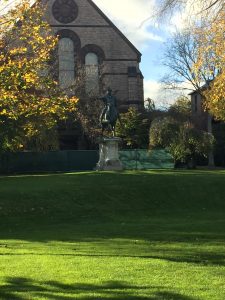 In 1908, the equestrian statue of Marcus Aurelius, sitting atop the hill on Ruth Simmons Quadrangle, was unveiled to the Brown community. It complimented the statue of Caesar Augustus, which had been placed in front of Rhode Island Hall in 1906 (later moved to Wriston Quad in 1952). The statue was donated by Colonel Robert Hale Ives Goddard on behalf of his deceased brother Moses Brown Ives Goddard. The original Equestrian Marcus Aurelius Statue is an ancient Roman statue in the Capitoline, Rome, Italy. It is supposed to represent a symbol of power and divine glory. This commemorative structure was used to acknowledge the memory of a lost loved one. The study of memory, as Doss presents, is a recent, 19th Century move to understand cognitive psychology, understood by Freud as “a tool that individuals could use to retrieve personal information from the past”. She also contends that today’s “memory boom” is related to identity politics, the diverse social and political groups looking for a voice and competing for representation in the public sphere (48).