Filene’s article made me think about a project initiated by the Pitt Rivers Museum in Oxford and the British Museum in London.

This is a summary of the project from the Pitt Rivers Museum’s website:

In September 2009, twenty one delegates from the Haida First Nation travelled to the United Kingdom to work with museum collections and form an International Research Network with the Pitt Rivers Museum and British Museum. Delegates handled nearly 800 Haida treasures, and also gave carving and weaving demonstrations, public talks, and public dance performances. The Network sought to understand the importance of historic collections for Indigenous communities, to improve their access to collections, and to learn together about the collections. Most importantly, its goal was to build long-term relationships between Haida people and museums in the UK holding Haida treasures.

I’m not about to give the museum a pat on the back for involving an originating community in the story of their own material culture. The Haida delegates may be outsiders in terms of the museum’s traditional methods of curation (though it is important to note that the delegates include museum professionals from the Haida Gwaii Museum as well) but they should not be seen as outsiders to the central narrative of the museum’s collection. I do, however, think this could be an example for other ethnographic museums to follow. 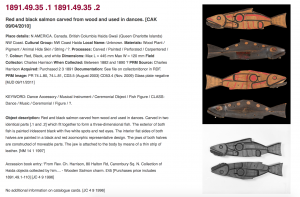 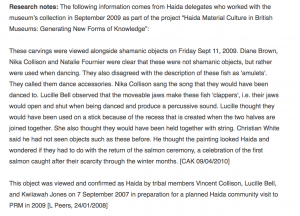 In the museum’s online catalogue, objects from the Haida culture are described in the traditional museum way with additional research notes from the delegation’s visit. The notes make mention of disagreements within the delegation about the objects’ use or origin, stories from the delegates about how similar items have been used in their community and, more intimately,  stories about family history. These accounts are not the “dispassionate” analyses of evidence achieved with the “critical distance” that Filene ascribes to professional historians. And yet, it is crucial that they are included in the narrative around the objects.

The British Museum was also involved in the 2009 research trip but has not included any similar notes in its publicly available information about its collection of items from the Haida culture. This maintains a singular view on these objects and also presents the museum as sole authority. The differences in approach seems to be rather telling.