In his essay, “Passionate Histories,” Benjamin Filene makes the persuasive claim that institutional outsiders often produce the “most creative work” in public history.  A sociologist established the Lower East Side Tenement Museum, for example, and a sculptor launched the City Museum of St. Louis.

“Can we teach boundary-breaking creativity?,” he asks.  And can we sustain creativity under the demands of school?  I suppose this is something that most of us will grapple with in the coming months and years, feeling the tug of “professionalization” rites while trying to deepen our attunement to the vital collective imaginaries of our communities.

That tension is real, but it needn’t be a matter of choosing between scholarship and artistic practice.  I agree with Filene that the disconnect has a lot to do with institutional media biases: namely, the academic paper or monograph as the highest, if not the only legitimate, end goal of serious research; and more fundamentally, the precedence of the written word.  I wonder if artists-turned-academics, under these expressive constraints, simply fall out of practice with other media, and fall out of touch with their extra-institutional collaborators.

This situation seems to be changing quickly, however, as a sense of urgency about the need to communicate and engage more widely presses upon academics concerned with social justice, as well as attracting artists and activists to scholarship.  Still, the structural divides persist, and it seems like we are in a moment when they could either collapse or harden. 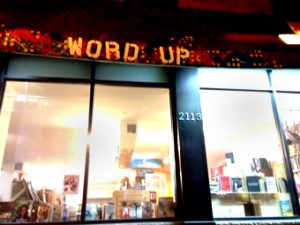 When I was living in Washington Heights, NYC circa 2010, a friend of a friend was launching a community bookstore/events venue called Word Up.  The Heights had no sizable bookstores at the time, and few public venues for community arts.

Word Up started in the midst of a deep recession, when independent bookstores were closing everywhere, including in Manhattan.  This one, a not-for-profit, kept afloat thanks to volunteers, donors, and neighborhood advocates.

Word Up embodies the “new participatory culture” that Staulings and Mauldin seek to make visible to traditional arts supporters.  The organization thrives as a platform, not a program, for “creative expression.”  I find this wildly inspiring, especially for Manhattan, where the rental market is so inimical to grassroots institutions.

Check them out here:  https://wordupbooks.wordpress.com/about-us/

Two different ways of approaching history were demonstrated by two different case studies that we explored this past week:  the Fort Snelling, Minnesota site that Amy Tyson writes about, and the East Side Tenement Museum, which we visited this past Friday.

I have never been to Fort Snelling or any similar site, with interpreter-actors and re-enactors, but I wonder if there is a risk, in what is often described as “bringing history to life,” of imparting a facile satisfaction of having been there, of having seen the past “as it really was.”1

At the Tenement Museum, a guide walked us through the rooms, and discussed what extant archives and material artifacts might suggest about the building’s nineteenth century tenants, but there was no presumption of understanding their experiences.

The ethics of speaking for the dead are always fraught, but I wonder if the latter approach is a little more honest. 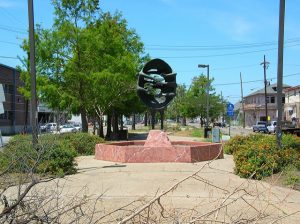 When installed in 1976, sculptor Frank Hayden’s memorial to Dr. Martin Luther King dismayed many residents of Central City, New Orleans. The sculpture consists of a coiled metal figure, reminiscent of an ouroboros, with self-enfolding arms and stalky legs. Text from King’s speeches lines the inner ring of the figure, “and there is a bullet hole to commemorate Dr. King’s assassination.” Rebecca Carter writes:

The Hayden sculpture was not removed, but the task force secured funds for a second sculpture, which was installed in 1981 on the neutral ground of South Claiborne near the intersection of Martin Luther King Jr. Boulevard. The project was spearheaded by a group of ministers and community leaders and supported by financial contributions from Central City residents (Faciane 1981).

Maybe Hayden’s sculpture does too much. Though I personally find it appealing, the residents’ dissatisfaction is immediately understandable. By fancifully expressing the artist’s sense of who King was, it almost seems to resist other people’s sentiments and recollections of the honored subject (funny how this kind of “abstraction” often alienates in pursuit of universals.)

Reading about this makes me wonder about the nature of memorials, especially those intended to commemorate the dead. Why do those memorials that stray from the iconic and towards the symbolic so often fail to resonate those who would embrace them? As a topic of class discussion, I wonder: what are some examples of non-iconic memorials that do resonate widely and thus serve as sites of community? 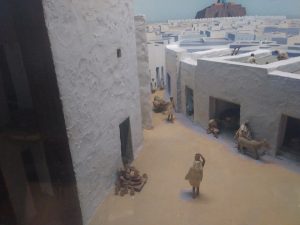 Mark Dion’s work draws (ambivalent) inspiration from the representational logics of natural history museums. A New Yorker, Dion says he pays regular visits to the Natural History Museum in Manhattan, where some dioramic displays still on view date back to the institution’s expansion in the early 1930s.

I had the chance to visit the AMNH today, three days after having seen Dion’s survey exhibition at the ICA. Built into the walls of one room were little windows into elaborate dioramas of ancient and historic cities; miniaturized reproductions of pre-communist Peking, 18th century Calcutta, and third millennium B.C. city of Ur.

Scale models of complex realities such as cities have a fraught history. It is perhaps not coincidental that the popularity of the museum diorama in the mid-twentieth century coincided with the grand urban renewal schemes of American planners, who mistook static representations for reality to devastating effect on actual human communities.

When divested of its historically idealizing and reductionist tendencies, however, I think that the diorama is a tremendously evocative form. It can model spatial dynamics and other kinds of relatedness that are hard to convey by other means. As in Mark Dion’s work, dioramas can also serve to defamiliarize present realities, such as the ecology of landfills, in productive ways. While recognizing the limits of the genre, in other words, I think it has poetic as well as pedagogical possibilities that are still unfolding.

(see the house by clicking here)

David Hammons’s two-story, six-foot-wide House of the Future has stood  on the corner of America and Reid Streets in Charleston’s traditionally African-American East Side neighborhood since 1991, when it was premiered as part of a citywide exhibition titled Place with a Past: New Site-Specific Art in Charleston.

“Inspired by the vernacular of the Charleston ‘Skinny House,’” the structure was built with materials salvaged from neighborhood demolitions.  But unlike the rows of prewar wooden tenements surrounding it, the House of the Future meets the street line diagonally, a gesture, writes Arden Sherman, towards “a community where corner stores, corner churches, and corner gathering spots are central parts of life.”

The endurance of Hammons’s House seems to suggest that it distills the spirit of the place in a way that rings true for those who know it. Like Osorio’s neighborhood-embedded projects, Hammons’s house does something that maybe the term “site-specific” doesn’t quite capture.  Rather than aligning concept to site conditions, It draws inspiration up from its environs in a way that productively blurs the distinction between inspiration and outcome, site and vision.

Arden Sherman, “The House of the Future: An Installation by David Hammons” 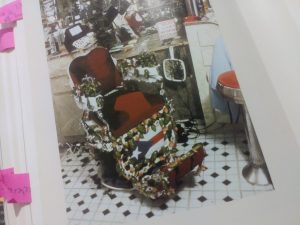 In the early nineties, installation artist Pepón Osorio moved away from gallery work in recognition of the reality that “the experience implicit in museum and gallery exhibition has not been one to which the Puerto Rican people have been historically welcomed, especially for the contextualization of their culture.”*

He chose instead to embed works like En la Barbería No Se Llora (1994) in working-class Puerto Rican neighborhoods where the material lexicon, the things of life that inspire and populate his work would be more likely to resonate with people’s direct experience, and perhaps summon more in those that happen upon them than low-voltage aesthetic pleasure. Out in the world from which they sprang, eliding the spatially reified divisions between art and culture, institution and street, Osorio’s works disarm and invite a greater range of responses from a greater diversity of people than the rarefied space-apart of the museum might allow.

Reading about Osorio’s work in Jennifer Gonzȧlez’s Subject to Display, I feel an exhilarating sense of what public art can do–how the very fact of its being public suggests a world of possibilities and forms that we have only begun to explore.

Museums are institutional spaces in which people curate objects and experiences that they consider vital or meaningful and wish to share with others.

They seek resonance in a fluid public.

The museums that achieve this resonance across many divides of consciousness, I suspect, are the ones conceived and made as reefs that life in motion traverses.

This seems to jive with Hilde Hein’s idea that public art provides a useful model for museums, for the way that the former “accumulates energy” through engagement and “thrives in the real world of bird droppings and vandalism” (Thinking Museums Differently, 161, 50.)

In her book Museums and the Public Sphere, Jennifer Barrett recognizes museums as spaces of cultural production, and calls for their greater democratization as such. This is an inspiring proposition, but I think her attempt to define the role of the museum in terms of the Habermasian political public sphere is limiting.

In other words, the political public sphere is a narrow conceptualization by design–it is conceived as a society’s representation of itself to power in terms that power understands. Museums can and should serve as sites for this kind of targeted discourse, but they also can and should be more than narrowly political institutions of the Habermasian variety.

Museums can also serve as spaces of individual and collective self-explorations that are open to the non-rational, to ambivalence, multivalence, and messiness–spaces for societies to talk about and among themselves in ways that the concept of the political public sphere does not exhaust. This is not to say that museum exhibits (of whatever kind) lack a political dimension–of course they do, but perhaps the “public sphere” is too brittle a framework for understanding the potential roles of museums in public life.

see Jürgen Habermas, “The Public Sphere: An Encyclopedia Article (1964),” New German Critique, no. 3 (1974).  Habermas writes that the “first modern constitutions…insured the existence of a realm of private individuals assembled into a public body who as citizens transmit the needs of of bourgeois society to the state, in order, ideally, to transform political into ‘rational’ authority within the medium of this public sphere (52-53.)