“The objects of the Rasmussen Collection, however fairly or freely bought and sold, could never be entirely possessed by the museum. They were sites of a historical negotiation, occasions for an ongoing contact” (Clifford 1997:194).

In this quote in “Museums as Contact Zones,” Clifford expands our idea of cultural artifacts beyond the object and into the dealings of its historicity, both in terms of original usage and use as art.

This article illustrates a scenario wherein the Portland Museum in Oregon invited representatives from the Tlingit community to discuss the collection of cultural objects in the museum’s collection. The well meaning hope was to reinstall this “Rasmussen Collection” with input from the Tlingit community. As it turned out, when this consultation occurs- which Clifford calls a “contact zone”- the curators present objects and the elders played through the ways they used the object.

I LOVED the fact that the elders there were presented with these objects and putting them back into practice. It was such a show of embodied practice, their full understanding of their own cultural context embedded in their ritualization of these objects. This is something that individuals can study and intellectualize, but no one outside the community can truly access in the same way. In that way, this culture was and always would be theirs. But the question is, if the object is never “fully” owned by the museum, what do they really own? They own, for one thing, the legitimating institution to make these objects high art, or to designate them as folk art.

This lends itself really nicely to talking about Appiah’s piece, “Whose Culture Is It?” and the history of cultural plunder.

Because, let’s be honest, those in immediate possession of the object are those who own the decision over whether to repatriate, when discussing artifacts plundered from the global South or from indigenous lands in the global North; in general, and speaking a bit polemically, international courts reify the power of the more dominant actors recognized by the State. So yes, the soul of the object remains with those who embody the culture. But who gets the ultimate say on an object’s physical fate is a question we should be concerned about as practitioners.

Here’s a link to the original posting of these rules, and more about them.

Here’s the other document I mentioned – the Walker Art Center’s “Art and Civic Engagement” plan: 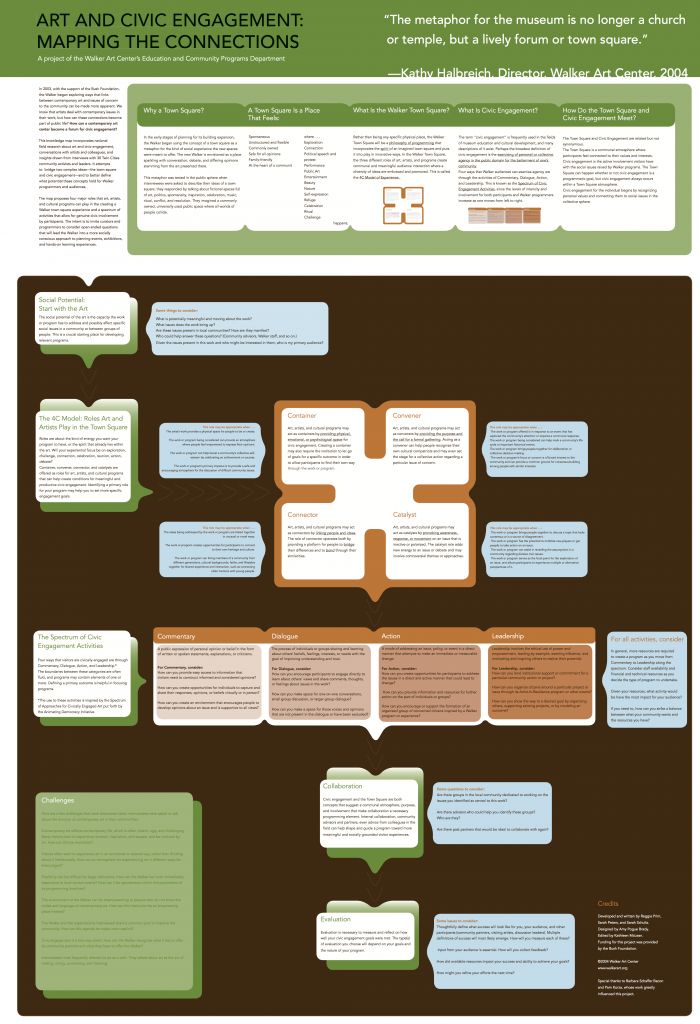 If we had more time, we might have worked with that center section—container, convener, connector, catalyst—and thought through how they might hep understand and put into practice the Hein and Warner readings, and what Hein and Warner might have said about them.

And one more thing on writing that might inspire you: Annie Dillard, “Write Till You Drop.”