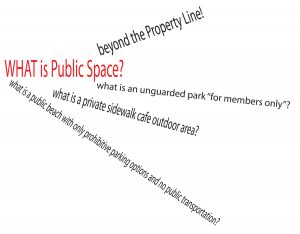 This week’s readings are important and inspiring. Both Jennifer Barrett and Michael Warner are one of the major figures writing about what constitutes a ‘public’ and their works outline the key features that may help us think about this concept and its development.

Jennifer Barrett’s Museums and the Public Sphere reflects on the history of the Museum and its link to the project of democracy as it emerged in 18th century France and examines a few key themes: the concept of the “public,” the contrast between the notions of “space” and “sphere,” ideas about vision and visuality, and the limitations and benefits of considering “community.” Barrett draws heavily from Habermas’ conceptualization of the bourgeois public sphere to begin her discussion, and refers to Tony Bennett’s theories of civic seeing to critique Habermas’ omission of the museum as a site of the public sphere. The author argues that within the context of museums, the term “’public’ suffers from a kind of philosophical poverty, rendering it at times almost meaningless” (43). Barrett suggests that using the term interchangeably with audience, nation, and community, museums and art galleries have failed to identify and address some key questions: “How then does the public participate in public culture; with what histories do the people identify; and what constitutes cultural institutions as public?” (43)

Barrett discusses the roles of the museum curator as public intellectual, one of the richest chapters in the book is very inspiring. And her book contributes to discourse on the role of the museum in society by exploring art, space, and visuality as significant components of the public sphere and the development of democracy.

Michael Warner’s article “Publics and Counterpublics” is equally (if not more) rich and suggestive. It revolves around a central question: What is a public? Warner begins with describing three senses of the word “Public,” and breaks his discussion of publics and counterpublics into seven sections, which were build on one another. He offers an extended examination of different facets of how a public or counter public is constructed.

One thing that I hope we can cover during class discussion is to offer some examples to help better understand these distinctions and why Warner tried to address that in this way.