Hilde Hein’s, “Public Art: Thinking Museums Differently” argues that museums should follow the lead of public art projects, in creating a relevant and visitor focused dialogue with the public. Hein encourages us to think about museums as public art, spaces that “wield power to move and re-assimilate us.” Historically, thanks to our Victorian forefathers in the museum sphere, museums are seen as elitist institutions where, if engulfed in flames, employees would save the valuable painting over the human visitor. Hein offers the public art model as a needed alternative way to best serve modern audiences. Public art is centered on engaging the visitor with many differing questions and realities. There is no right or wrong, instead a space filled with dialogue that engages. While I love the idea in theory I wonder how it would work in practice. I imagine it would require a constant change in programming and exhibits to keep the dialogue fresh and interesting for a 21st century audience, which could be difficult to implement. 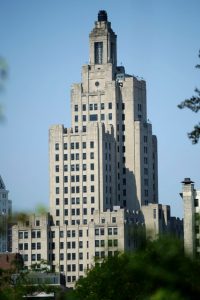 I was also interested in the section about “art in public spaces”, as memorials. I’m currently working on a project about the architecture of Downtown Providence. Much of Westminster, Weybosset, and Washington Street’s architectural gems are late 19th and early 20th century financial buildings. From an artistic point of view, Hein writes off the architectural flourishes of buildings as “corporate baubles”, that merely add aesthetic value to otherwise boring office spaces. However because of the financial hardships that hit Downtown, several buildings were left vacant, most notably, the iconic “Superman Building”. Though privately owned, it’s an icon of downtown and a point of navigational reference for many who explore downtown. I wonder how the tallest structure in the Providence city skyline can be transformed from simply an empty art deco building with Gorham bronze doors and beautiful frieze work into a memorial to the prosperity of Providence’s past? Since it no longer truly serves its original purpose as “art in public space” can it be transformed into a monument or memorial to happier financial times? Can it become “public art”? How can we think about art in (kinda) public space as an evolving experience to engage with?