How does pop culture reinforce/ reconstruct myths of American history? Can modern myths even be created or exist outside of pop culture media outlets?

I was thinking of my own experiences working at sites of American history as I read Glassberg’s piece, particularly how visitors often came to the John Adams home with “memories” from watching an HBO series or reading a popular biography. Many were nostalgic for places they had never been, and often described to me scenes from the HBO series (which was not filmed at the historic location, but most thought that is was). I never watched the HBO series, but after a few months of working at this historic home, I felt like I had!

Glassberg poses the question, “Will mass culture in the next century prove to be a more powerful force than the nation-state in the twentieth century for the standardization of public historical imagery?” (Glassberg 14). It seems to me that mass culture and divided politics (more than a singular nation-state) work together to create imagery that builds into myth and nostalgia. Still,  the mass culture piece often comes first. People visit the Grange (Hamilton’s home) because they have seen the musical; they do not see Hamilton because of a prior love for Hamilton the man. The same was true at the historic home where I worked, and so visitors often had the same mass-produced views of the story that they were not necessarily looking to change. Interpreters at recognizable historic sites have always been faced with myths of the history, but I wonder how myths created by mass culture interact with historic sites differently than myth passed down through generations that did not create specific images. Mass culture creates the imagery of the place, while myths picked up in reading or conversation leave the visual to each individual. 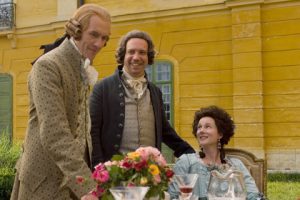 Note that the picture above of the HBO John Adams series is not at the historic home in Massachusetts, but actually filmed in Canada and Virginia.