Amid our bombardment with examples of politically instrumental memorials this week, I would like to posit one more. Allow me to regale you with a tale of when I found myself in Skopje, Macedonia—the first stop on my tour de cheapest Air BnB rates in Eastern Europe. It would have been even cheaper too had I taken the man I sat next to on the plane up on his offer to let me stay at his house, but movies like Taken and Hostile have ruined random international acts of kindness for me.

As a result of my trust issues, I found myself wandering uninformed through a landscape of Cyrillic-labeled but Turkish-looking food, the best damn coffee I’ve ever had, and literally hundreds of obscure monuments. I assumed that all these statues must have some rich and contested history—as similar looking statues do in the US—and marveled at their concentration in one location. None seemed to have explanatory labels, but perhaps all were readily recognizable to someone more educated on Macedonian history and culture than I was. 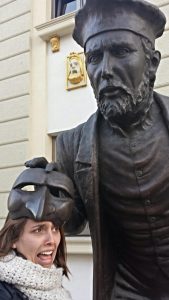 The next day, I left the city with a massive, jovial, and ruggedly attractive guide named Jane, who informed me that contrary to my initial assumption, the many monuments in Skopje were brand new and had little to no basis in Macedonian culture or history. He explained that their placement was a strategic ploy by the Macedonian government to increase tourism and boost the tiny, struggling economy. Jane remarked snidely that most of the country lacked paved roads, yet the government had hundreds of millions of dollars to sink into meaningless entertainment for tourists. 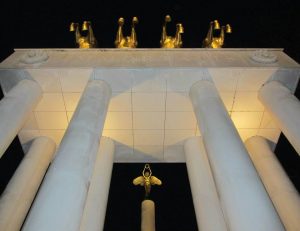 I think this example compliments our readings not just by adding an international example to a heavily US-based narrative, but also to complicate the idea of memorials as instrumental to historical narrative. The memorials in Skopje create the illusion of a grand national past that is almost entirely fictional. It serves as an index of a hypothetical national identity rather than an educational purpose for an ignorant or uncritical audience—a motivation that I think is also at play in American monuments. Not unlike strategic selfie lighting, memorials help us depict the identity of a place the way we would like it to be seen. 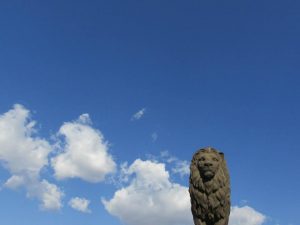