Barbara Kirshenblatt-Gimblett raises the question “What does it mean to show?” and explores the agency of display in settings like museums, festivals, world’s fairs and tourist attractions. This week’s readings and video all touched on how objects and people are collected and exhibited, and are made to display or perform their meaning.

The satirical video “The Couple in the Cage” criticized the objectification of African women in the 19th century. A parallel runs with this during this same period is the display of Chinese people (Chinese women in particular) in museums, circuses, and world’s fairs, which eroticized and objectified Chinese people and its culture, establishing a stereotype/framework within which the general public became familiar with viewing the Chinese and Chinese immigrants.

According to Sucheta Mazumdar’s chapter in the first major book covering women’s experiences in the United States published in 1998, for Chinese immigrant women, their history of being exotic and objectified began when American merchants brought a Chinese woman with bound feet to America for display in the 19th century:

The first recorded Asian woman in the United States was Afong Moy. Between 1834 and 1847, she sat every day surrounded with Chinese lanterns, vases, and Asian artifacts at the American Museum, the Brooklyn Institute, and other New York locations. She talked and counted in Chinese and ate with chopsticks to entertain the thousands who lined up to see her. Barnum’s Chinese Museum later brought over Miss Pwan-ye-koo and her maidservant with great fanfare. The small, bound feet of both women were a prime attraction. This objectification of Asian women and their portrayal as alien and exotic creatures is one dimension of American popular culture that has endured until the contemporary period. (46-47) 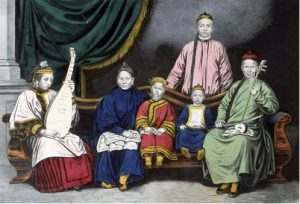 Here Mazumdar points to the fact that Chinese women were objectified and commodified in the 19th century America and the shows helped construct the earliest stereotype of Chinese women (East Asian women in general) as exotic and more sexually desirable.

Actually, Peabody Museum at Harvard holds a collection of New Daguerreotype Discoveries, and the National Women’s History Museum offers an online exhibit “Chinese American Women: A History of Resilience and Resistance,” both of which provide background information and research about the performance troop “The Living Chinese Family” in 1850 by famed circus showman P.T. Barnum.

One thought on “Objectification of People”