Vagnone’s “Anarchist’s Guide to Historic House Museums” might not be as revolutionary as the title (as many of us have noted), but it is still practical, much needed advice. As Amelia noted, many historic house museums are behind the curve of accessibility and relating to visitors, so a more middle-of-the-road approach to programming and visitor relations might work best. 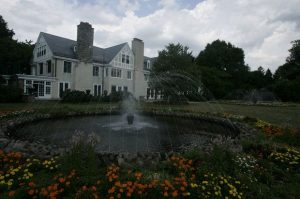 Sometimes, though, museums take a more drastic, new approach to programming. Reading Vagnone and Simon, I was reminded of the historic house museum – Duke Farms – that demolished its historic home. Well, the property was really preserved for the landscape and because it was owned by the tobacco money heiress Doris Duke, but it also included a 1893 historic structure that was torn down just last year. Doris Duke created foundations for her other homes based on their architecture, but Duke Farms’ was meant to preserve the farm and property. Over time, the mission evolved to “inspire visitors to become informed stewards of the land” and inspire “people to transform their approach to conservation” (About Duke Farms 1).

The historic home was never designed as an architectural beauty – it was only meant as a temporary home while the family waited for a nicer house to be be built (which never was). Demolishing the house created controversy in the New Jersey community, but also perfectly followed Simon’s advice on relevancy. The home did not hold any particular historic value, and demolishing it allowed Duke Farms to further realize its mission of protecting the landscape and providing recreation space for visitors. 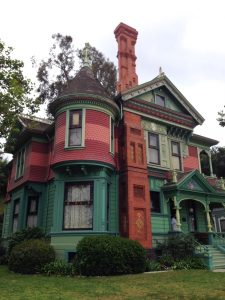 Within the United States, Los Angeles is not exactly known for its historic house museums. Owing to its relatively late industrialization and urbanization, it never had the abundance of pre-Civil War era homes that places like New England are famous for and many of the historic houses that did exist were demolished in the name of urban renewal to make space for more “efficient” post-war housing and industry. Nevertheless, there are more than a few notable historic homes in the Los Angeles area: in this post, I’d like to talk about my experience with one cluster of historic homes that make up the Heritage Square Museum.

Located off the Arroyo Seco Parkway (a narrow, winding old highway that cuts through the hills of Northeast Los Angeles) at the end of a cul-de-sac in the working-class neighborhood of Montecito Heights, it is a relic of the Victorian era. The immaculately maintained houses look like beautiful haunted houses and growing up, I thought they were. It wasn’t until the 2016 Museums of the Arroyo (MOTA) Day that I realized that these houses are indeed haunted: haunted by the specter of antiquated historic house museum practices.

Normally, the price of admission prevented me from visiting. But on MOTA Day, when several local museums offered free admission, I came with my younger sister. While the folks working the admission table were friendly, some of the house guides were not. I did not see a sign prohibiting photography, so I tried to take a photo of the interior of a house and was promptly yelled at by a guide. This startled me and set the tone for the rest of my experience.

I don’t think the guide was trying to be rude. Like people in other professions, museum professionals can forget how much authority they have in certain situations and how this comes across to visitors. Unfortunately, this makes us worse at our job, which is to connect people to objects and places. Reading the Anarchist’s Guide to Historic House Museums was a helpful reminder of this and I appreciated its strategies for engaging visitors and communities.

Historic house museums are often paradoxical in that they are homes but you do not feel at home. The philosophy of the Anarchist’s Guide basically boils down to enhancing communication through self-awareness and empathy. You are interested in a subject: now imagine someone could be less interested in this subject than you. You grew up in a certain class: now imagine a person grew up in a different one. Imagine these things and now with this knowledge, try and connect to other people, as fellow humans with their own thoughts, bodies, and experiences. Within the context of house museums, enhanced communication serves the role of facilitating a meaningful experience for the visitor with regard to education and interpretation.