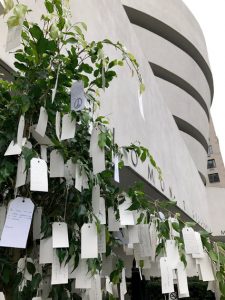 The reading for this week prompted me to differentiate between two distinctive paradigms of the museum’s role in social justice: social and political commentator and active agent of social change.  Lois Silverman’s  The Social Work of Museums really brought this distinction to the fore. Her argument that social workers should serve as key museum staff members reified the active role museums could have in affecting social change within their own walls.  The other paradigm is brought forth in Richard Sandell’s “Museums and the Combating of Social Inequality”. There he demonstrates how museums can utilize their exhibitions to reflect their social and political positions, and provide commentary on major social and political events. While I am not making a value judgement, to me this seems a more passive role than Silverman’s strategy.

The New York Times article “Museums Chart a Response to Political Upheaval” further underscores the difference between a museum’s role as social/political commentator and agent of social justice, as it charts various museums’ responses to the Trump administration’s social/political agendas. One example the article describes is the Guggenheim Museum’s response to plant Yoko Ono’s “Wish Tree” in front of its building for passers-by to write down their wishes for the future and hang them on the tree.  In this case the “Wish Tree” was implemented in response to the tense political environment and to promote inclusivity, allowing the whole public to contribute to the art piece (Bowley, 2017). The “Wish Tree” is a symbolic endeavor to reflect the Guggenheim’s response to Trump’s inauguration and seems to fall in the social/political commentator camp. Another cited museum response is the New York Historical Society’s plan to open an exhibition on immigration and its programs that help people learn “what they need to know to pass a Naturalization Test and become a citizen” (Ibid.). In this case, the Society is actively confronting the Trump administration’s immigration policies by aiding and educating immigrants about the citizenship process.