I really enjoyed our class on the “breath of the wild” that gardens, parks, and flora/fauna generally provide as a critical component to palatial spaces, especially from an experiential and phenomenological perspective. As I further investigated Minoan gardens, keen on incorporating this into my palace design, I realized that some of the challenges we discussed in class with respect to identification of garden spaces are especially present in Minoan archaeology.

In my post last week, I talked about the critical significancfe of natural imagery and iconography in Minoan religion and civilization; exemplars of floral frescoes are abundant at a number of Minoan sites, and Akrotiri is no exception. In my research, I found a fascinating article by Jo Day that critically examined the state of the evidence for gardens in Bronze Age Minoan Crete, and learned some interesting historical context of early excavations that have colored scholarship’s interpretation of this symbolism.

When Sir Arthur Evans began excavating Knossos in the year 1900, he “developed a distinctive personal interpretation of the civilisation … a vision which many other excavators followed, and which still looms over Minoan archaeology” that “gentle Minoans led a happy existence in a world ‘whose characteristics were the love of life and nature’” (Day 2006, 189). Joanna Day argues that Minoan civilizations have been reduced to a so-called “society of flower-lovers,” and while natural imagery was clearly abundant and significant, it perhaps should not be all they are known for (Day 2006, 189). Day then continues into a critical analysis of the two types of areas suggested as Minoan gardens: either medium-sized areas without evidence for any structures, or courtyard-like areas enclosed within residential quarters of elite buildings.

Of course, much of the conclusions drawn in either case are from absence of evidence, especially in the prior type and most notably at Mallia. At Mallia, on the north coast of central Crete, an area stretching along the residential part of the complex was essentially a blank space for two phases of the building, and the French excavators could come up with no other explanation (Fig. 1). 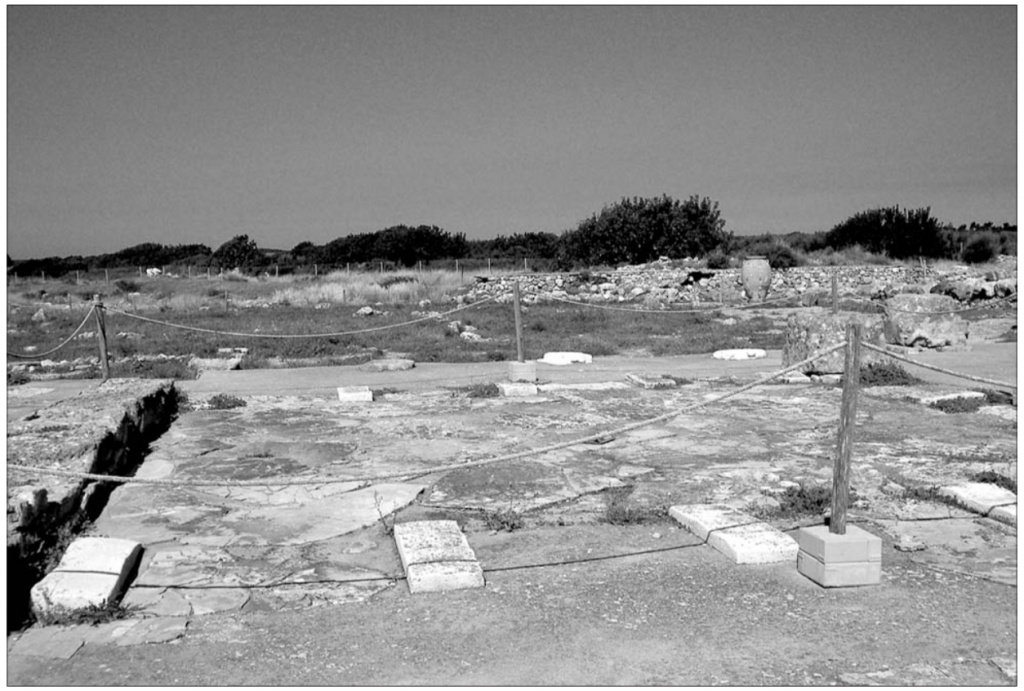 At Phaistos we have another, more interesting example, which we mentioned briefly in class. Maria Shaw suggested at one possible area a rock garden, interpreting an array of holes bored into rock as niches for planting; this interpretation is contested by scholars (Fig. 2). Although I find this really interesting, I’m hesitant to include something like it in my own palace because we lack at least one other comperandum, and it could just be an anomaly—if Shaw’s interpretation is even sound! 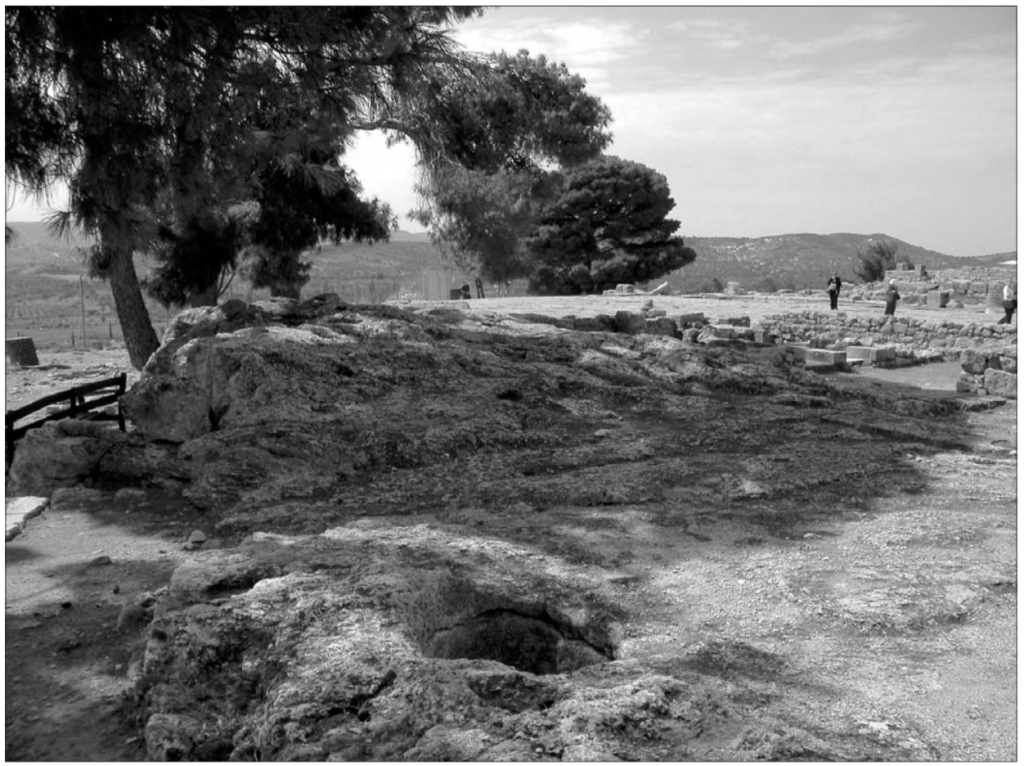 Connecting further to our discussion fo the challenges of positively identifying gardens in the material record, Day mentions that paleobotanical analysis is epsecially challenging at Minoan sites, and evne the so-called “Aegean Pompeii” of Akrotiri.

I certainly plan on including a courtyard in my palace design, and gleaned some important details about what should and should not be included. All Minoan courtyards suggested as gardens are completely devoid of pools (it would have been fun to include one, so this is too bad!) and, to my surprise, save for one exception at Mallia, are all paved. There is also no evidence for raised soil beds that we have seen in some other civilizations in class.

Something I definitely do want to include as part of my design, especially knowing that my courtyard will be paved, is extensive use of potted plants. We know from frescoes and other iconography that Minoans did grow potted plants. Interesting, Minoan plant pots are unique compared to those from other well-known Mediterranean archaeological sites is that they were extensively decorated and also lacked holes on the side for roots to spread. This indicates that “Minoan flower pots, while intended for growing plants in a soil matrix, were not intended to be sunk into the ground, but would have remained visible on the surface wherever they were placed” (Day 2006, 192). As a millennial fan of houseplants myself, I’m glad to see there’s attestation for these to be included in my palace design! 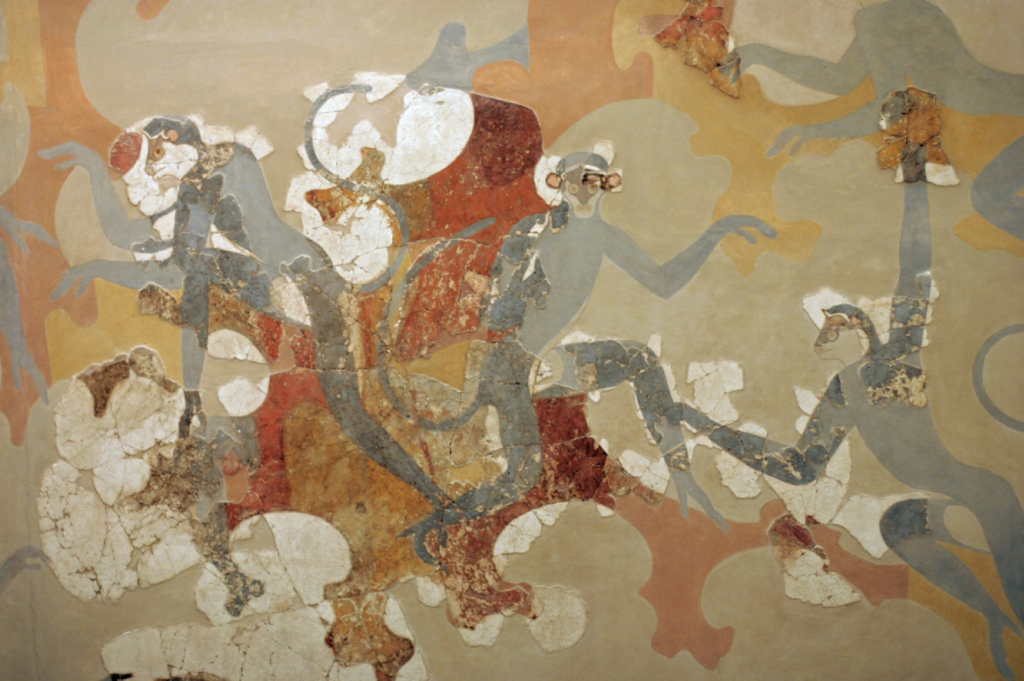 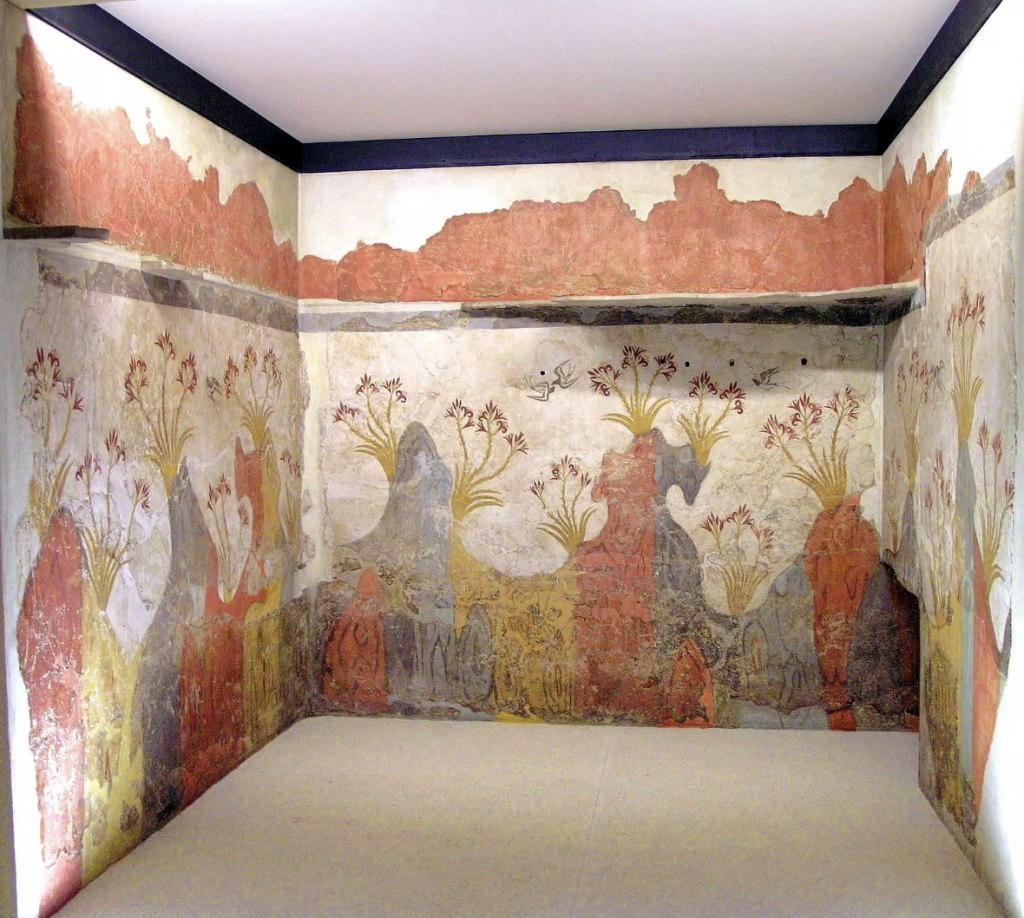 To conclude, I want to discuss two examples of Minoan frescoes that I think connect interestingly to our discussion of audience and how literally we should take iconographical presentation of flowers and gardens when inferring about actual gardens. The well-known “Monkey Fresco,” from Akrotiri, which I have discussed previously, combines exotic fauna and exotic flora (Fig. 3). Anthropoligcally, this so-called “botanical imperialism” can be seen as an expression of power, and elites have long used exoticism, including of flora and fauna, to demonstrate their status. But whether we can take this fresco literally to infer that Minoans kept monkeys as pets I think is a little shaky. Another example, the so-called “Spring Fresco,” from Akrotiri, is a very surrealistic representation of a tamed/tended landscape, with appealing but non-realistic colors, undulating forms, and scale (Fig. 4). Because of how surrealistic this depiction is, it makes me a little hesitant to accept the fact that anything we see in a fresco is interpretable as a literal representation of materiality in the civilization, although I do think the idea of Minoan pet monkeys is an interesting one!