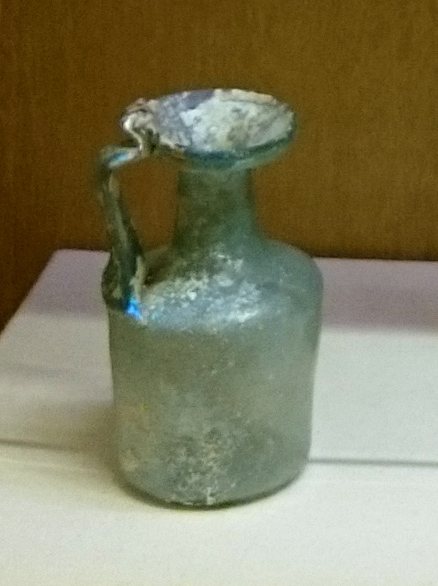 Object JI1733 features a striking iridescent quality that is often found in ancient glassware. Unlike the process of achieving iridescence in modern pieces, the iridescence of this object and others like it was not an intentional design choice made by artisans in ancient times. Rather, iridescent qualities in ancient glassware are caused by weathering on the surface. This weathering process depends on several factors, including the levels of heat and humidity within the burial site, as well as the type of soil that the glass was buried in. Also at play is the chemical composition of the glass itself. All of these conditions determine to what extent alkalis, or soluble salts, in the glass are absorbed by slightly acidic water in the soil, thus, eroding the glass material.

Once weathered to thin layers, some of which delaminate or even flake off, ancient glassware begins to refract light in ways that resemble a prism. If held at different angles and observed in different lighting, object JI1733 produces a rainbow-like effect, emblematic of the interplay of luminous colors created by its weathered surface.