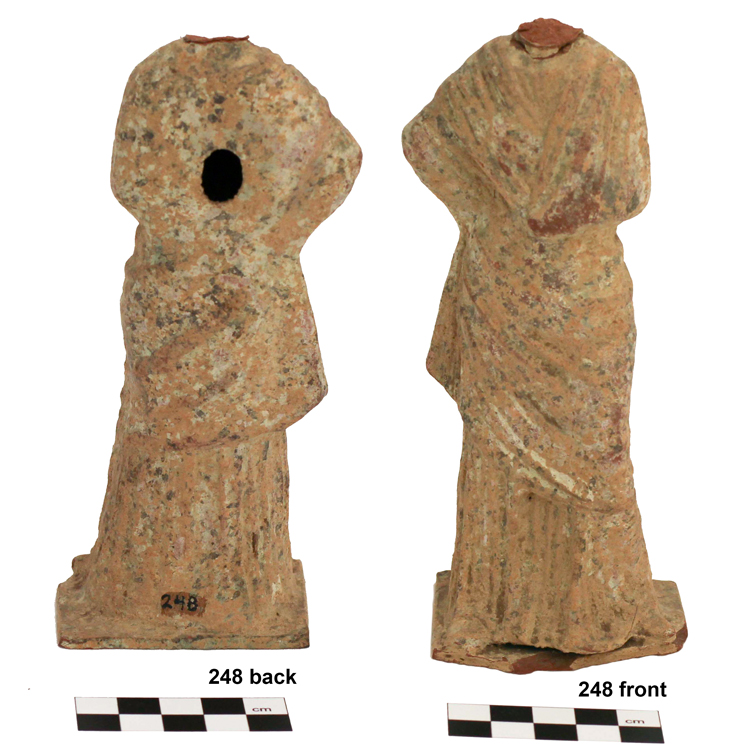 Although not ancient, Object 248 features certain qualities that reflect methods of manufacturing Tanagra figurines used in ancient times. Crafted by artisans known as coroplasts, Tanagra types, including this particular one, involved fashioning terracotta into two-part molds, one for the front and one for the back of the statuette’s body. Vent holes, like the one present on the back of Object 248, helped to not only release gases during the firing process, but also are believed to have facilitated the process of connecting the front and back sections from the inside. More delicate pieces, such as arms, heads, wreaths, fans, and hats, could be formed by the coroplast by hand and attached to mold-made pieces before firing. Also present in Object 248 is a rectangular base, often used to stabilize Tanagra figurines.

The methods of Tanagra production as reflected in Object 248 are a testament to the variability and customizability of such figurines. Coroplasts could use the same body mold types to create a myriad of unique statuettes by simply altering the design, direction, and position of various add-ons. Thus, Tanagra figurines were able to represent a wide array of scenes of everyday life in ancient times, in turn capturing the attention of late nineteenth century Western audiences by reflecting their fantasies and imaginations about the Classical past.

Learn more about the production of Tangara figurines and see other examples: