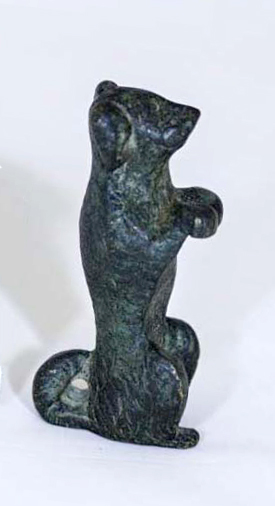 Happy National Dog Day! In celebration, let’s take a look at object 286 – a solid bronze figurine of a dog begging (sitting up on hind legs with paws drawn to the chest). It’s possible this figurine depicts one of the most popular dogs in antiquity – the Melitan, also known as the Melitaean, Melitean, Melitaian, or Maltese (though it doesn’t closely resemble what we know today as the Maltese Terrier). Representations of this lap dog can be found on vases, gravestones, statues, gems, and coins and show the Melitan to be a small, fluffy, spitz-type dog with a pointed muzzle and a curled trail, often white in color. There are many indications that these dogs were treated as family members – vases show Melitans playing with children, texts tell of Melitans being taken as companions on voyages, and gravestones were erected in their honor.

One Roman gravestone was found with a carved figure of a dog and the inscription:
HELENAE ALUMNAE
ANIMAE
INCOMPARABILI ET
BENE MERENTI
Which can be translated as “Helena, foster-daughter, a soul incomparable and well-deserving,” suggesting that the ancient Romans loved their fur babies just as much as we do!

Learn more about Melitans and see other depictions of these ancient lap dogs: