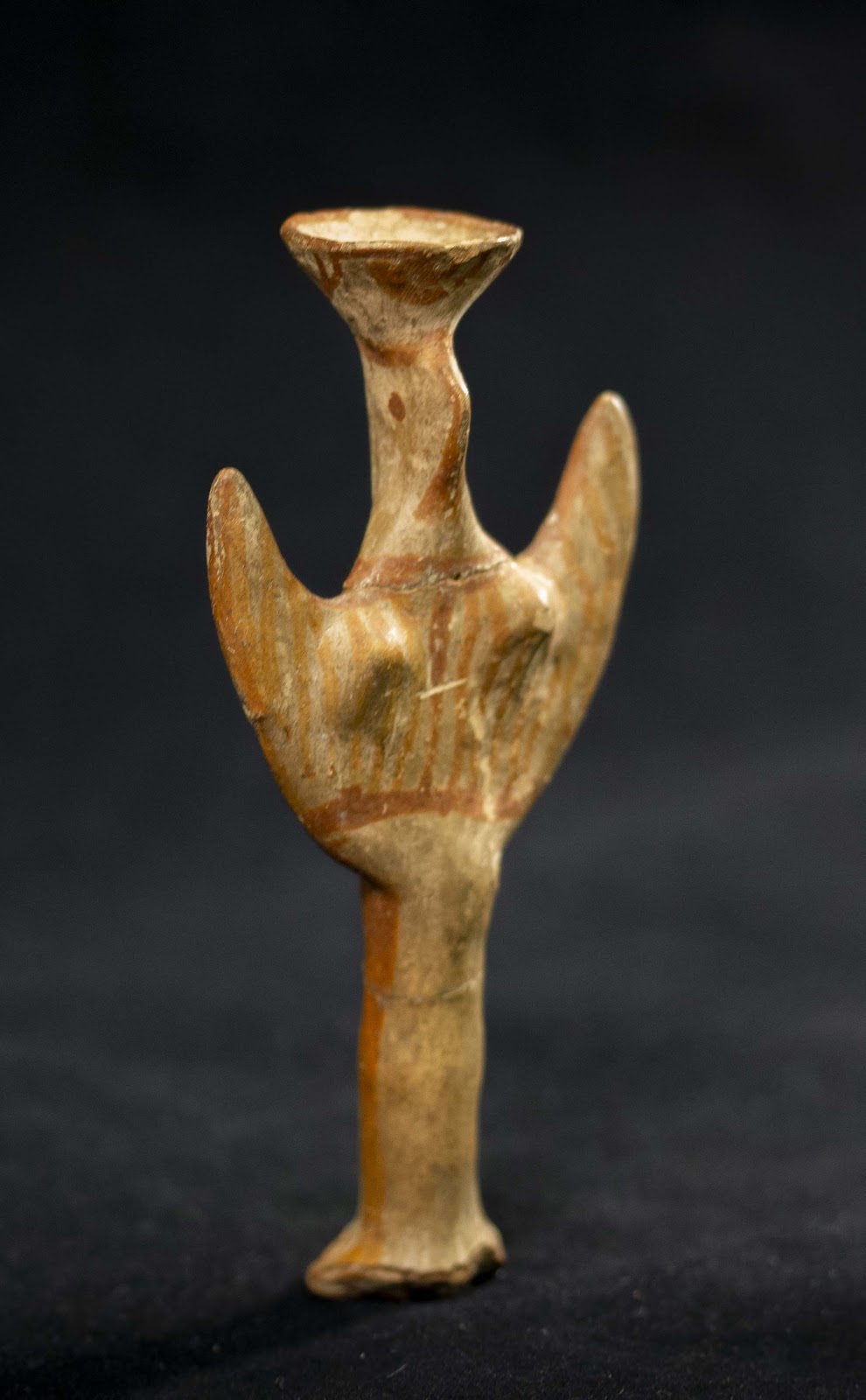 Figurines are one of the most celebrated artifacts in museums and digital collections. The human eye is attracted to figurines, whether because we think we are viewing a small version of ourselves or because we are drawn to the tactility of a small object.

Mycenaean figurines are also common in museum displays and collections, representing the Mycenaean civilization. They were produced in a specific timeline, ca. 1420-1100BC (Late Helladic III). They are categorized into three main types, based on the gestures of their arms and were named by their resemblance to the letters of the Greek alphabet: tau (T), phi (Φ), and psi (Ψ). The tau figurines fold their arms into their chest, the phi figurines clasp their hands in their stomach, and the psi figurines raise their hands. There are many variations within these types, as well as some examples that cannot be included in these categories, such as the so-called kourotrophos, depicting a female holding a child in her arms, and group figurines, such as enthroned females, chariot groups, or horse and rider. Researchers agree that the figurines represent female bodies.

Object 14 is a Mycenaean psi figurine, probably dated in ca. 1330/15-1200/1190 BC (Late Helladic IIIB). It is freestanding and made of clay. The base is missing, but the lower body is tubular, ending on a high-waist, where the flat upper body begins. There is an indication of breasts. The face is pinched and dresses with an elaborate headdress (polos in Greek). The features and the dress are drawn with red paint.

But, who was she? There have been many suggestions on the use of Mycenaean figurines, mainly affected by their associated archaeological context. One of the most long-lasting approaches considers them as a part of the religious sphere. Are they representations of goddesses? Some researchers believed that they represent the goddesses of the popular cult, and they function as votives or offerings. Another approach suggested their use as children’s toys, as many of them have been found in children’s tombs. However, figurines are also found in domestic spaces and palatial contexts, therefore, implying that their use was not restricted to certain social groups. Whatever the interpretation, researchers have noticed the association of the figurines with beads and a drinking vessel, the kylix. Recent studies try to move beyond function and focus on production, context, and the use-life of each artifact. They acknowledge that throughout the life of a figurine, its use could have multiple meanings, according to the context within which it was used. Therefore, figurines had a complicated life; this is even more obvious from their disposal. They were broken and discarded, like any other object that had fulfilled its purpose.

Nevertheless, figurines are our window to human representation. Even though we acknowledge that these are symbolic representations and products of miniaturization, they remain a depiction of female personhood and identity. Their posture, gesture, and dress accentuate the female performativity which had a specific meaning to the Mycenaean viewer. Her arms are raised upright; is she surrendering, praying, or dancing?

Can her clothes inform us of what she is doing? The red paint describes her clothing and at the same time accentuates her body movement. The body, the dress, and her gesture are parts of a cohesive whole. Her flat-topped headdress is decorated with a double festoon. At the back of her neck, three knobs represent a single plait of hair. The rippling, given by the wavy lines, gives the impression of a loose-fitting blouse, which permits her to move easily. A kind of belt fits the blouse and a long skirt into her body. She does not wear any jewelry, but her elaborate headdress suggests that she is dressed up for an occasion.

Read more about the Mycenaean civilization and see other examples of Mycenaean figurines: