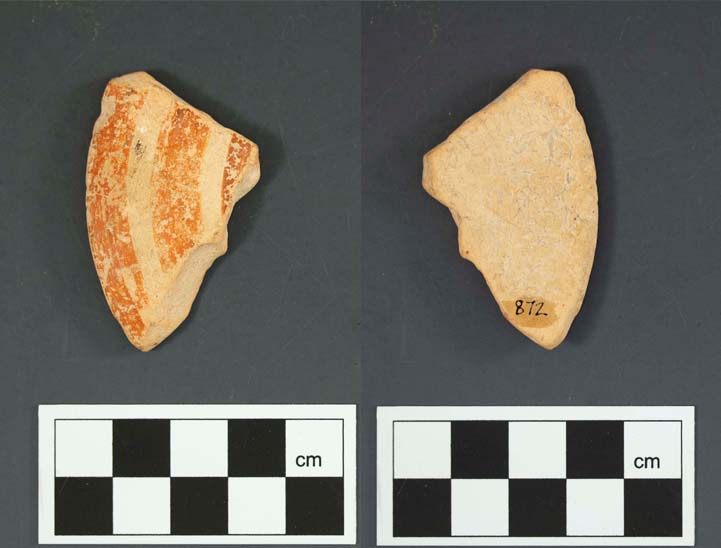 The kylix is a drinking vessel, favored by the Mycenaeans. Its main typological characteristics are its round base and the tall cylindrical stem ending to a bowled cup with two handles. It was not only favored by Mycenaeans but also from archaeologists, as its typological evolution helps define the chronological subperiods of Late Helladic III (ca. 1420/ 10-1075/50 BC). Even more conveniently, kylixes are to be found in all types of contexts; domestic, ritual, and funerary.  Usually, kylikes bear painted decoration of parallel bands, from the base up to the stem, until the beginning of the bowled cup or the handles. Normally, the bowled cup carries a decoration zone with a variety of motifs, such as running spiral, Argonauts, scale pattern, whorl-shell, flower, or octopus. Nevertheless, unpainted, plain kylikes also occur. Lastly, the kylix is extremely haptic; the tall stem, the wide bowled cup, and the two handles suggest many different ways of holding the vessel.

The sherd of the JIAAW collection is a typical base, decorated with reddish concentric circles. The base is rather flat with curved edges, thus placing the sherd in Late Helladic IIIA2 or IIIB1 (ca. 1390/70 –1200/1190 BC).

Current research has associated the kylix with feasting. Feasting is being researched not as a biological act, as the mere consumption of food and drink, but as a constructed and contextual social act, which constructs social identities, shared experiences of consumption, and shared memory. Feasts are differentiated from household consumption as they have to be associated with a specific location, a specific use of foods and drinks, and associated paraphernalia. Meat from animal bones, conical cups, and kylikes, probably for serving and drinking wine, consists of a usual assemblage of Mycenaean feasting. Evidence like this has been excavated in many sites, such as Asine, Phylakopi, Tiryns, and Iklaina. In Pylos, miniature kylikes have been found alongside other related artifacts. Moreover, feasting and its logistics are probably attested in Linear B tablets from Thebes, Pylos, and Knossos.

Who is holding the feast? If feasts are organized by the central administration, this should involve complicated logistics, as it would be necessary to gather resources and mobilize labor, thus having an impact on the organization of society. However, feasts could be community celebrations and organized by the community. And even though logistics would be the same, the social impact would be rather different.

Whatever the context, feasting is a social act with a powerful agency, in which material culture, such as the kylix, had a very important role to play.