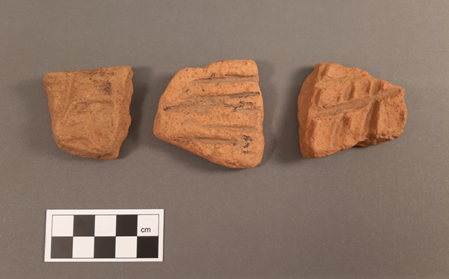 Beekeeping is attested by traces of beeswax on ceramic pots, as early as the Middle Neolithic (ca. 5800-4500BC) period in Greece. Whether this was the product of wild or domesticated bees remains uncertain. Also uncertain is the shape of the beehives, as no complete specimen has been found.

Archaeologists argue that pots bearing scoring on the inside belong to beehives of the horizontal ceramic type. Horizontal beehives are laid against a steady element, such as a wall or a tree, and can be stacked. Pictorial evidence from Ancient Egypt shows this way of positioning the beehives. The bees start working from the top of the interior and create combs that hang down within the hive. Little wooden bars can be used to help the bees form vertical combs and facilitate harvesting. Are these little wooden bars responsible for the incisions in the clay? Even though this seems plausible, some researchers doubt that these interior incisions are used exclusively for beehives, as they can also see their usefulness in dairy or other food processing.

The three sherds from the JIAAW collection are a characteristic specimen of what an archaeologist would think is part of a beehive. Their exact context is not known, but they bear a lot of similarities with examples from the Neolithic Peloponnese, Greece (ca. 6500-3200 BC).