This light brown, buff colored vessel with dark brown geometric designs may seem fairly innocuous at first glance.  However, its production, shape, and decoration are all tied to dramatic shifts in trade and exchange in the Mediterranean during the Late Bronze Age (ca. 1650-1050 BCE).

The Late Bronze Age Mediterranean, particularly the eastern Mediterranean, was characterized by heightened amounts of contact between different regions. The Hittite and Egyptian empires were vying for control of the Levant – the western coast of the Middle East.  Archives excavated at the Egyptian site of El-Amarna (founded by the one and only Akhenaten) and the key trade center of Ugarit (located in modern Syria) have produced a staggering amount of letters exchanged between the rulers in Egypt, Mesopotamia, Anatolia, the Levant, and, most importantly within this discussion, Cyprus. These correspondences demonstrate a network of “kingly exchange” where rulers send gifts with the expectation of receiving something in return.

This pan-Mediterranean contact was not just limited to a brotherhood of kings. The Uluburun shipwreck, found off the coast of southern Turkey, provides evidence for the more mundane side of these trade networks. The ship contained hundreds of amphorae, demonstrating its vast storage capacity, as well as other trade goods including drinking vessels and copper ingots originating from the island of Cyprus (Hirshfeld 2008). 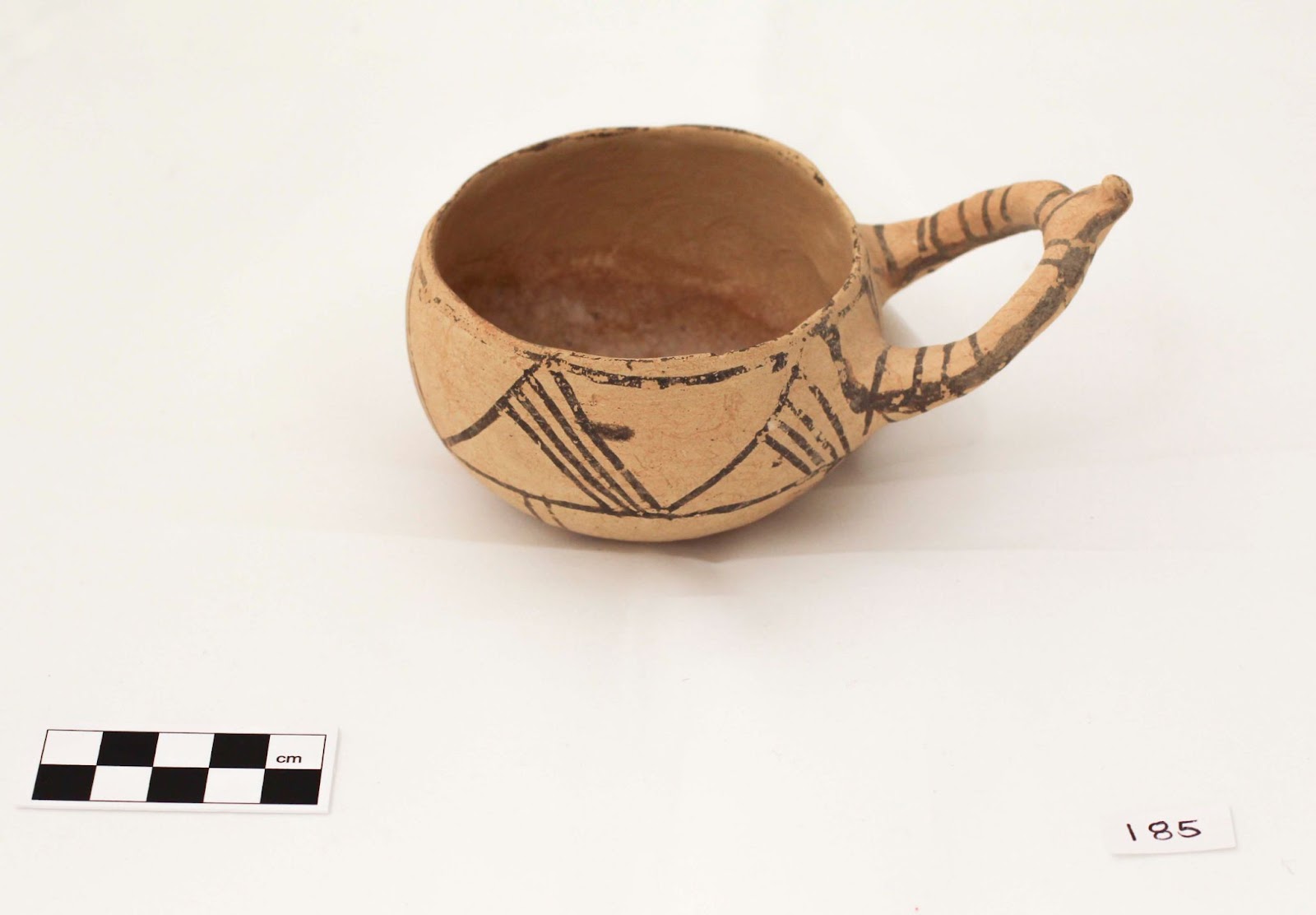 So how does this little drinking cup fit into these grand trade networks? The vessel can be identified as a typical White Slip II ware, commonly referred to as a “milk bowl” due to its light, almost-white slip. These bowls or cups were produced in Cyprus during the Late Bronze Age, but their presence is found throughout the Mediterranean, from sites in the Levant like Megiddo (Clark 2018: 75-78), to those in Sardinia like Nuraghe Antigori (Vagnetti 2001: 78), as well as in the North Sinai and Egypt (Bergoffen 1991).

One of the key commodities during the Late Bronze Age was, as the name of the period might suggest, bronze. Bronze is not a naturally-occuring metal, and instead is produced through combining copper and tin. Cyprus was a key tradestop during the Late Bronze Age due to its copper-rich mines, and letters to the king of Egypt as well as archaeological evidence from shipwrecks provide solid evidence for the high demand of Cypriot copper. 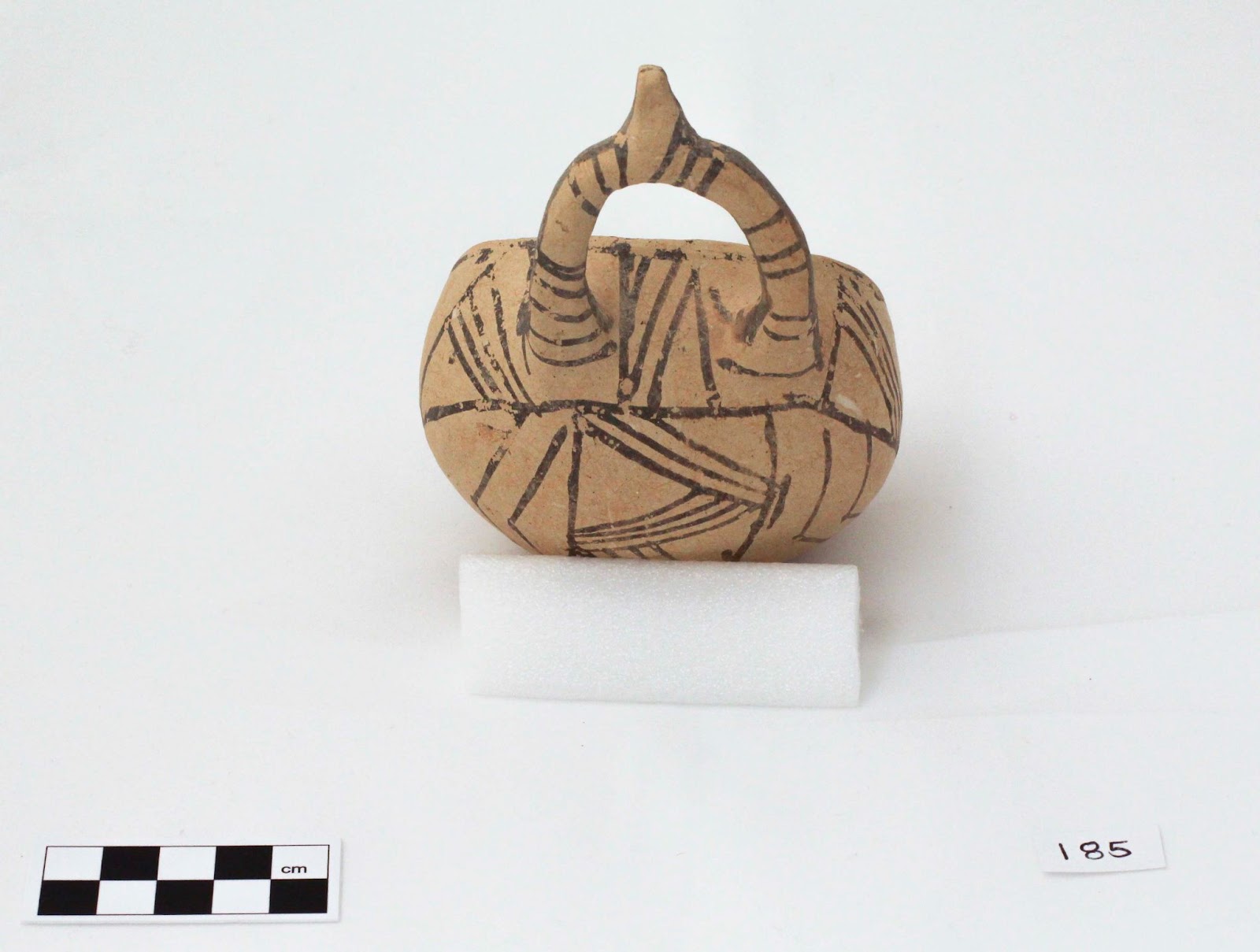 Of course, materials don’t just travel by themselves. Traders and sailors traveled throughout the Mediterranean and brought small objects along with them, including small drinking vessels like the one in our Vault Collection. Cypriot traders could bring these items with them and exchange them for other goods, and it is likely through this that a demand for White Slip II bowls grew and grew. In fact, they seem to have been more popular outside of the island; scholars have argued that external demand, particularly in the Levant, drove the production of milk bowls in Cyprus.

While this little cup with a fun wishbone handle seems like a simple, everyday object, the wider context of the importance of trade and Cyprus during the Late Bronze Age demonstrates that even mass-produced, less valuable artifacts can hold huge importance.

Bergoffen, C. J. (1991). Overland trade in Northern Sinai: the evidence of the Late Cypriot pottery. Bulletin of the American Schools of Oriental Research, 284(1), 59-76.

Clark, B. A. (2018). Trade in Middle and Late Bronze Age Transition at Megiddo: A Study of Imported Cypriot Pottery. Master’s Thesis. University of Haifa.

Vagnetti, L. (2001). Some Observations on Late Cypriot Pottery from the Central Mediterranean. In L. Bonfante & V. Karageorghis (Eds.), Italy and Cyprus in Antiquity 1500-450 BC (pp. 77-96). Department of Antiquities Cyprus, Nicosia.