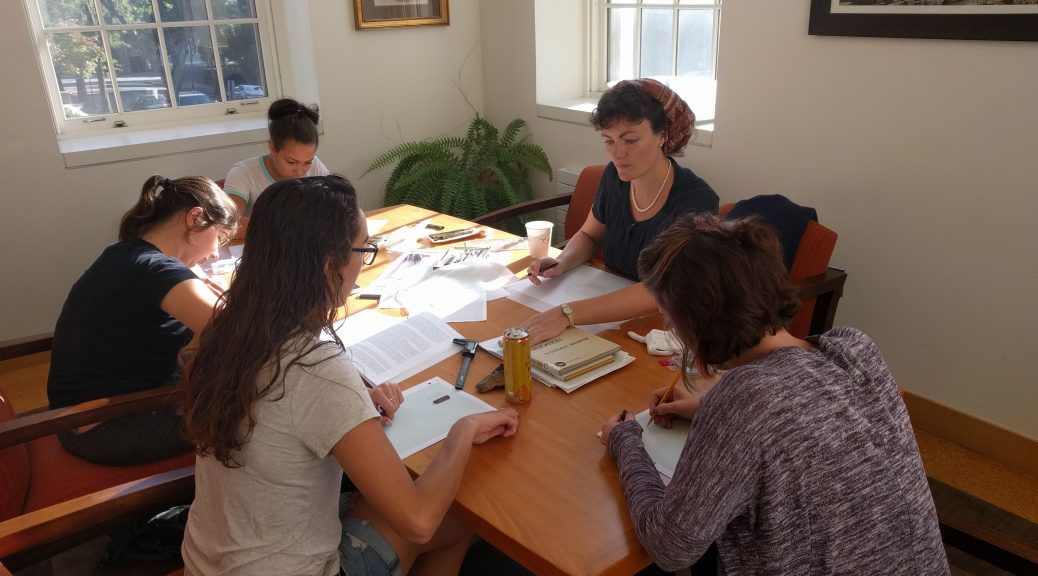 We’re half way into the first term of the archaeological illustration club at the Joukowsky Institute for Archaeology and the Ancient world at Brown University, and we’re off to a flying start.  Club members began by illustrating objects they had on them the first week. People chose their keys, or rings, or cameras to spend time with and create accurate technical drawings of. 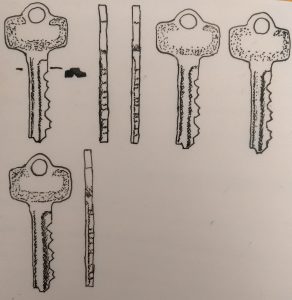 So much of archaeology is the accurate recording of features of interest, at any scale. In the field this means surveying landscapes, drawing scale plans of excavations or otherwise recording the physical environment. Archaeological illustration is an extension of that practice, creating accurate scale images of objects. We’ve been learning the disciplinary conventions of how different materials are illustrated, largely relying on Griffiths, Jenner and Wilson 2002 Drawing Archaeological Finds: A Handbook. Leicester: Flexipress.

Our members range from keen freshmen to RISD students looking to expand their skill set, so come and join us if you’d like to have a go!

September 21, 2017:
Carl Walsh (Joukowsky Institute for Archaeology, Brown University)
A Cup for Any Occasion? The Materiality of Elite Drinking Practices and Experiences in the Kerma State

State of the Field 2018:
Archaeology and Social Justice

Brown University’s Joukowsky Institute for Archaeology and the Ancient World will host a workshop called State of the Field 2018: Archaeology and Social Justice on March 2-3, 2018.  The workshop will be the culmination of two years of discussion on this theme, and is also intended to raise new issues, ask new questions, and encourage ongoing dialogue.  Our gathering builds on a tradition of “State of the Field” workshops hosted by the Joukowsky Institute to reflect upon trends in archaeological work, each year focusing our discussion on issues impacting an area of particular interest to our faculty and students.  While previous versions have dealt with a country or region of archaeological significance, this year’s event will focus on archaeology’s relationship to ongoing movements for social justice.

Within the context of archaeology, we conceive of social justice as pertaining to issues of privilege and opportunity that affect the makeup of scholars in the field, efforts among archaeologists to engage with the public and with broader social and political discussions, and the degree to which archaeological scholarship and pedagogy intersect with or impact these issues. It also refers to the asymmetries of power and structural inequalities in society at large. This choice of topic has been inspired by recent global social and political concerns, responses from universities and academia that seek to address issues of representation and access, and, most importantly, grassroots movements for social justice.

This workshop thus seeks to engage primarily with the role of archaeology in contemporary social justice movements, while insisting that discussions of diversity in the past can inform experience in the present. We welcome papers that explore the relationship between archaeology and the present political climate, with the intention of addressing the challenges currently facing the field of archaeology and the academy more broadly. We also seek to engage in conversations about the biases and structural problems that make archaeology more accessible to some than to others, in order to help the discipline reach a broader and more inclusive public.

The workshop will include four sessions, each addressing issues of the relationship of archaeology to ongoing struggles for social justice and/or the role of archaeology in those struggles. Rather than predefining the content of these sessions, we intend to shape them with contributions from this call for papers; we wish to offer an open space for discussion of the following, and other, relevant issues:

To submit a proposal for a paper of approximately 20 minutes, please send an abstract of 350 words or less to Joukowsky_Institute@brown.edu by October 1, 2017.

For questions about this CFP, or about the conference, please see our conference website, www.brown.edu/go/sotf2018 or email Joukowsky_Institute@brown.edu.

February 2, 2017:
Brendan Weaver (Berea College)
The Archaeology of the Aesthetic: Slavery and the Jesuit Vineyards of Nasca, Peru

February 9, 2017:
Eduardo Neves (Harvard University)
Was There Ever a Neolithic in the Neotropics?

April 13, 2017:
Samantha Lash (Joukowsky Institute for Archaeology, Brown University)
From Soil to Society: Framing Land Use and Climate Change in the West Mediterranean during the 1st Millennium BCE

October 8, 2015:
Douglas Armstrong (Syracuse University)
Small Farm to Large Scale Plantation: The Shift to Capitalism and Slavery in Barbados… and a Preliminary Look at “The Cave of Iron”

October 22, 2015:
Tate Paulette (Joukowsky Institute for Archaeology, Brown University)
“Not to Know Beer Is Not Normal”: The Archaeological Invisibility of Beer and Brewing in Bronze Age Mesopotamia

November 19, 2015:
Margaret Andrews (Joukowsky Institute for Archaeology, Brown University)
The Construction of Commemorative Landscapes in Rome’s Subura during the Imperial and Christian Periods

February 12, 2015:
Andrew Dufton (Joukowsky Institute for Archaeology, Brown University)
How Do You Solve a Problem Like the City?

March 5, 2015:
Martin Furholt (Christian-Albrechts-Universität zu Kiel, Germany)
Changing Materialities and the Mobilization of Social Practices: The Expansion of the Neolithic Out of Anatolia

October 23, 2014:
Matthew Reilly (Joukowsky Institute for Archaeology, Brown University)
Race on the Caribbean Plantation: Archaeology and the “Redlegs” of Barbados

November 6, 2014:
Mihalis Kavouriaris (The Ikarian Centre)
A Modern Greek Course for Archaeologists on the Island of Ikaria