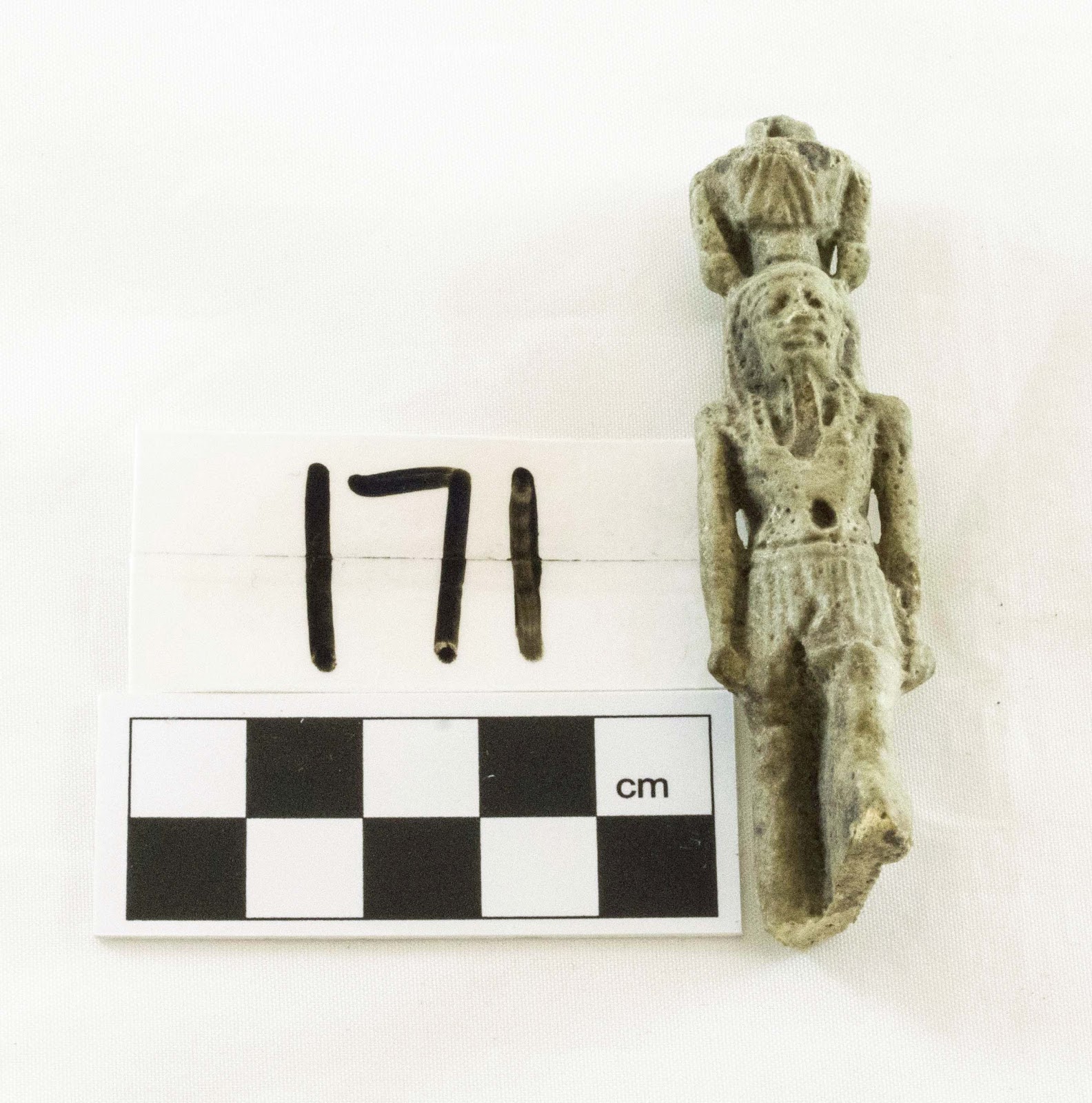 Object 171 is a faience figurine of the god Nefertum. Based on comparanda, this is likely a piece from the Late – Ptolemaic Periods (ca. 664-30 BCE). He is shown striding with his left leg forward, though his feet are broken off, and with his arms hanging by his sides. He has a beard and wears a kilt and a headdress of a lotus blossom, his main symbol. The plumes emerging from the lotus have also broken off, but the base remains visible. Hanging from both sides of his head are menats, protective symbols often associated with powerful goddesses.

Nefertum rarely appeared in earlier periods of Egyptian history. In Coffin Texts from the Middle Kingdom, he was referred to as the son of Sekhmet. He thus became part of the divine triad, assuming the child’s role, with Ptah and Sekhmet as parents. Nefertum grew in prominence during the New Kingdom and subsequent periods. He was thought to be the personification of the primordial water lily that opened during sunrise, thus giving him a significant role in one of the ancient Egyptian creation stories. Because of the lotus’ pleasant aroma, he was also known as the god of perfumes and ointments. Additionally, his connection with Sekhmet lent him violent attributes that made him suitable as one of the guardians of Egypt, and He Who Protects the Two Lands was one of his most common epithets. This protective attribute possibly explains the high numbers of discovered Nefertum amulets and statuettes, such as this one.

See other examples of Nefertum figurines:

Object 247 is an example of a Tanagra type figurine, named after the cemeteries in the Tanagra region of Greece in which figures like these were discovered in the 19th century. Figures such as this are representations of a long history of statuette production in and around Tanagra, which underwent several stages of cultural significance and symbolism. Dating back to the Hellenistic period, these figurines are believed to have been largely made and used as votive offerings, though by the end of the 4th century BCE had ceased to be objects of reverence and were manufactured simply as representations of women and girls in everyday life.

While object 247 is probably not ancient, it reflects the form and fashion of Tanagra figurines found in ancient sites in Greece. This object is a standing woman draped in intricately folded garments, supported by a rectangular base. It is an example of the fine details that are emblematic of Tanagra figurines, particularly the representation of intricate folding, draping, and stretching of garments. As was typical, this figurine was constructed out of terracotta, a dark red clay and coated in a white slip.

Learn more about Tangara figurines and see other examples: 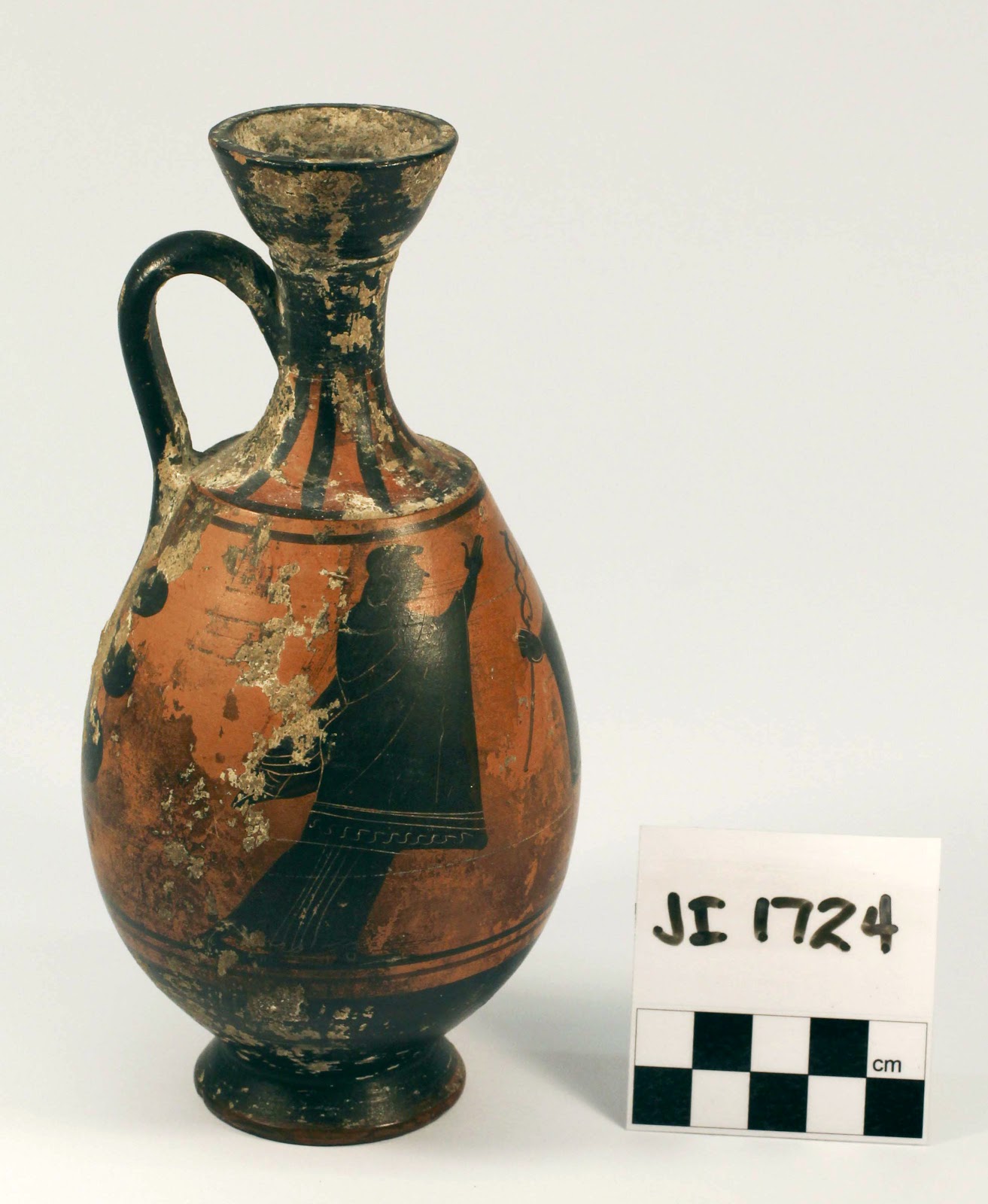 In celebration of National Olive Day (June 1), we’re taking a closer look at an object associated with olive oil storage – the lekythos!

With a narrow neck and a single handle, the lekythos is a small vessel that stores perfumed olive oils or other balms. Associated with death and funerals in the Greek world, lekythoi were typically left near the burials sites of unmarried women, allowing women to partake in the common wedding practice of smearing themselves with oil as they prepared for marriage in the afterlife. Lekythoi commonly depicted images of either daily activities and rituals or funerary art like parting scenes, moments of loss, or burial practices.

See other examples of lekythoi: 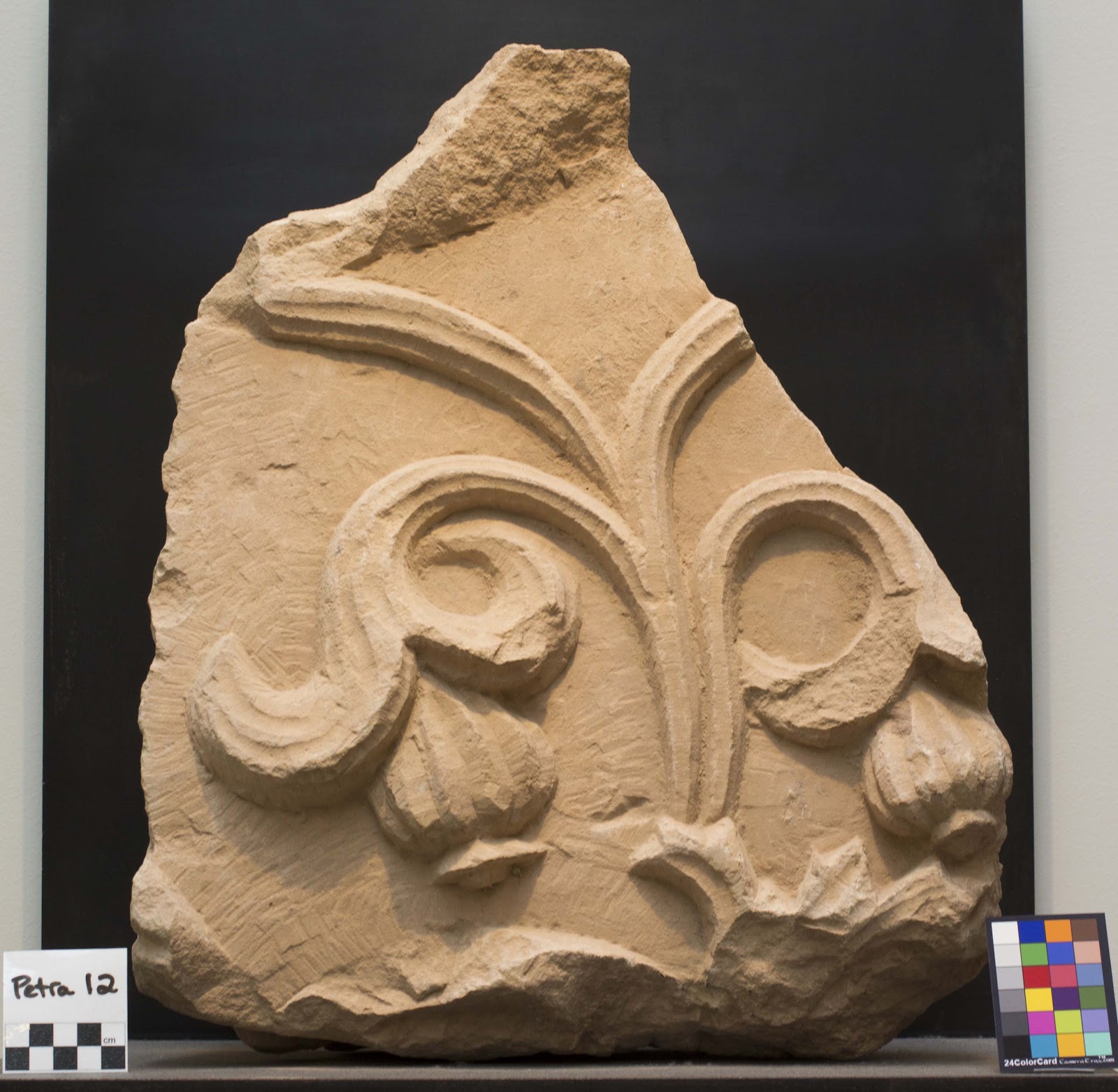 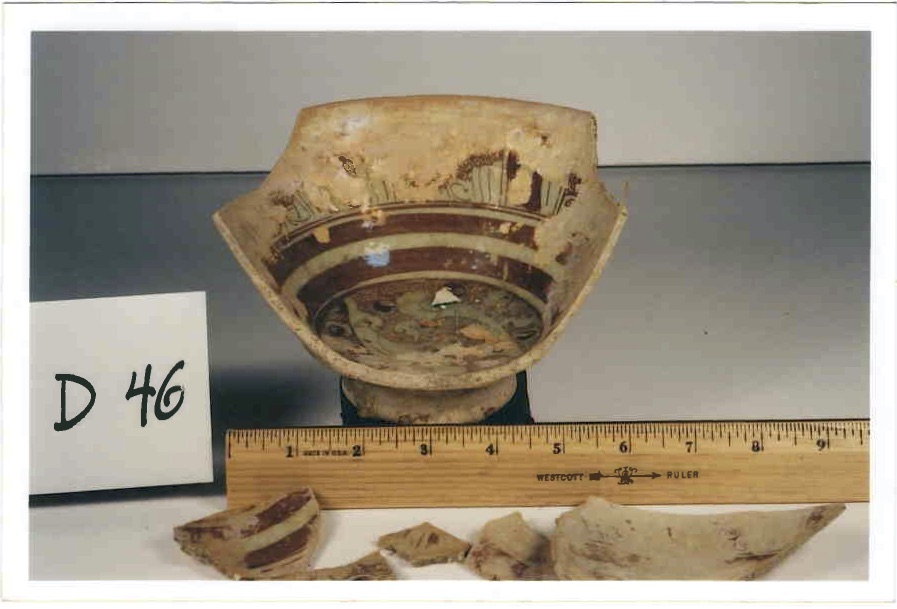 This partial ceramic bowl and the six fragments associated with it are made of relatively thin clay with a green and brown design coated in an iridescent glaze. The center of the bowl features an abstract geometric design with large brown dots and swirls in negative space. The wall of the bowl and the accompanying fragments reveal that the sides are delineated by green and brown colored bands. An epigraphic band marks the upper portion of the bowl’s inside wall, with a swirl pattern that matches the central design in negative space. Here, the word Allah is visible in bubble writing. Though not clearly pictured here, the largest fragment suggests that the exterior of the bowl is glazed with an equally intricate design as the inside.

See other examples of Islamic epigraphic ceramics and learn more about ceramics in the Ancient Islamic World: 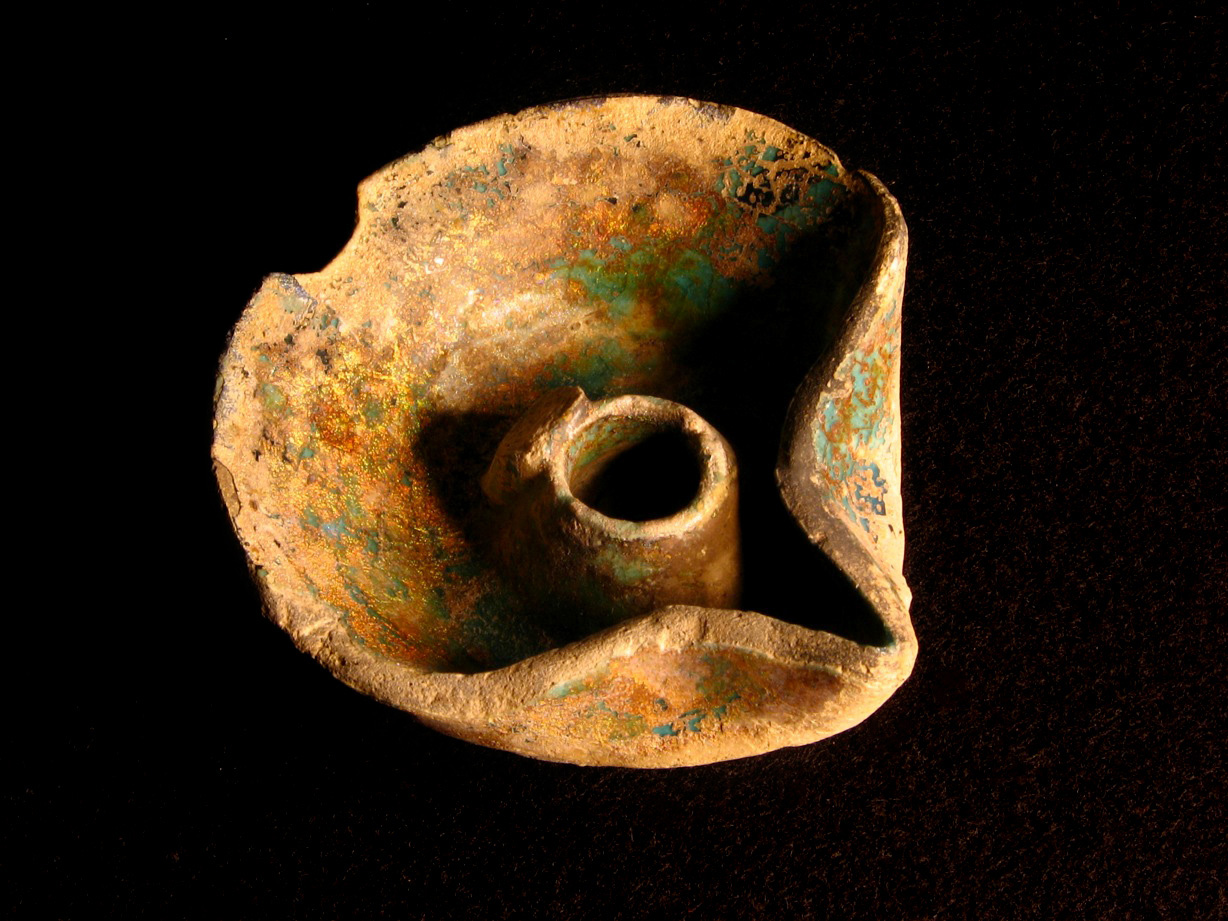 This ceramic oil lamp has a bowl-like shape with a raised center and a rim that has been folded over and pinched to form a place for the wick to rest. Both the interior and exterior of this lamp were glazed with a blue-turquoise color. Today, the lamp’s pigment appears iridescent, evidence of oxidation over time. The chip in the rim and the excess clay on the edge of the central fill hole allude to a missing handle that has been broken off of the lamp. The wick hole appears to have been filled in with clay, raising questions of its functionality. Perhaps this particular lamp was converted into a candlestick at some point.

Learn more about ancient oil lamps and see other examples of saucer-shaped lamps: 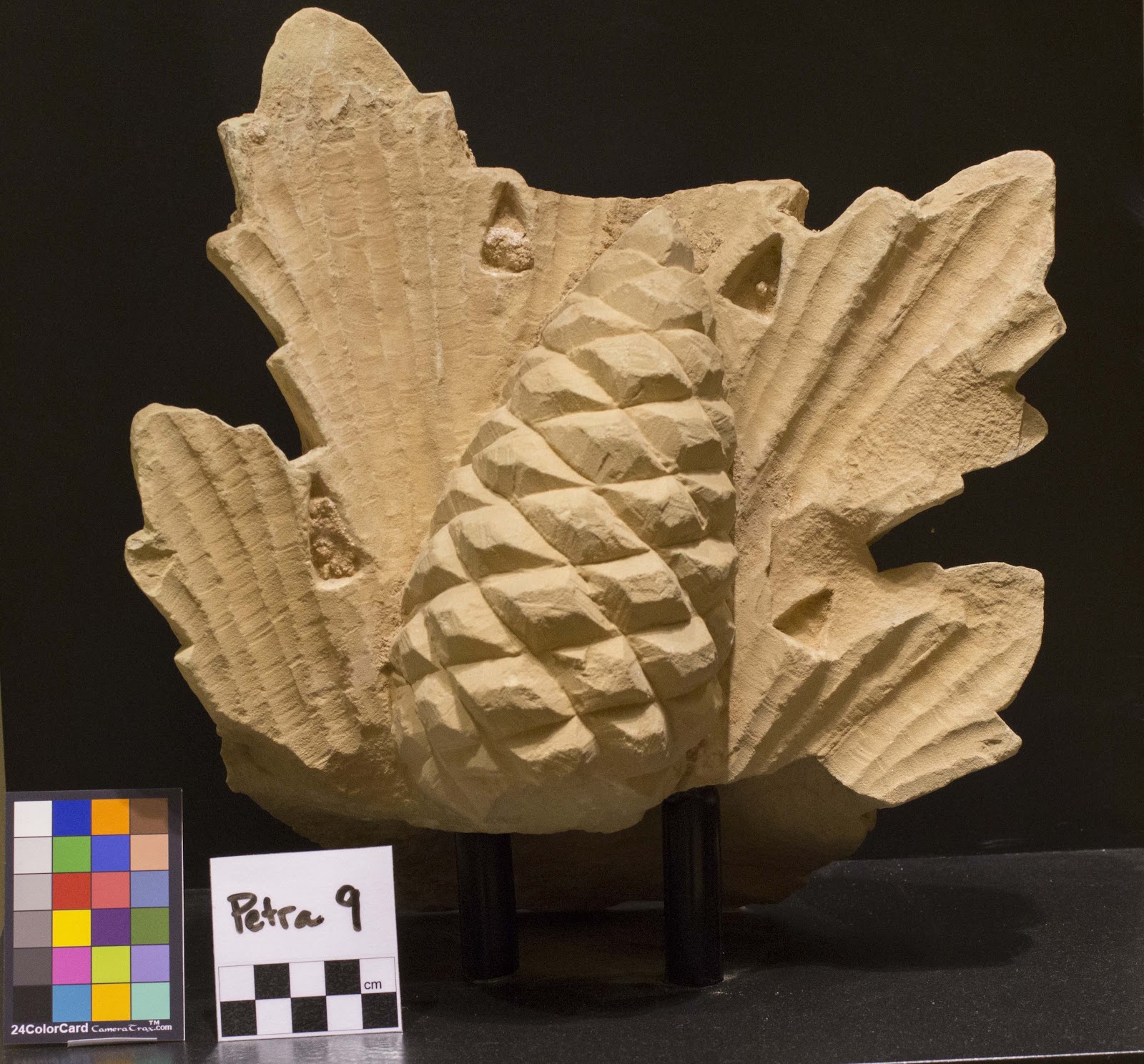 RRC 28/3, Rome, 225-212 BCE, 6.54g
This silver Roman Republican coin is called a quadrigatus after the four-horsed chariot (a quadriga) on the reverse (the back) of the coin. The quadriga is driven by the winged goddess Victory with Jupiter riding at her side holding a scepter in his left hand and preparing to hurl a thunderbolt with his right hand. The quadriga was a well known symbol and its presence on coins, especially in times of war, represented Roman military and political power and influence.

Learn more about coin C028.08.02 and see other examples of this type of coin.

These exquisite blue and white dishes belong to a family of ceramics called Kubachi ware. Kubachi wares are believed to have been produced in northwestern Iran during the 15th and 16th centuries, but are named after the village in the Caucasus where this type of pottery was primarily discovered. The blue and white motif that is common in Kubachi wares is largely inspired by the pottery of the Chinese Ming Dynasty, whose influence in this period stretched beyond Central Asia. Kubachi wares are made of stonepaste (also called fritware), a type of pottery in which crushed pieces of glass, or frit, were added to the clay allowing for the pottery to be fired at a lower temperature. This produced a strong white body which, as in these examples, could be glazed over with an opaque white solution, mimicking Chinese porcelain.

The Joukowsky Institute’s collection contains more than a dozen examples of Kubachi ware, including turquoise and black pieces, polychrome pieces, and more blue and white pieces like those highlighted here.

Learn more about Kubachi wares and see some other examples below. 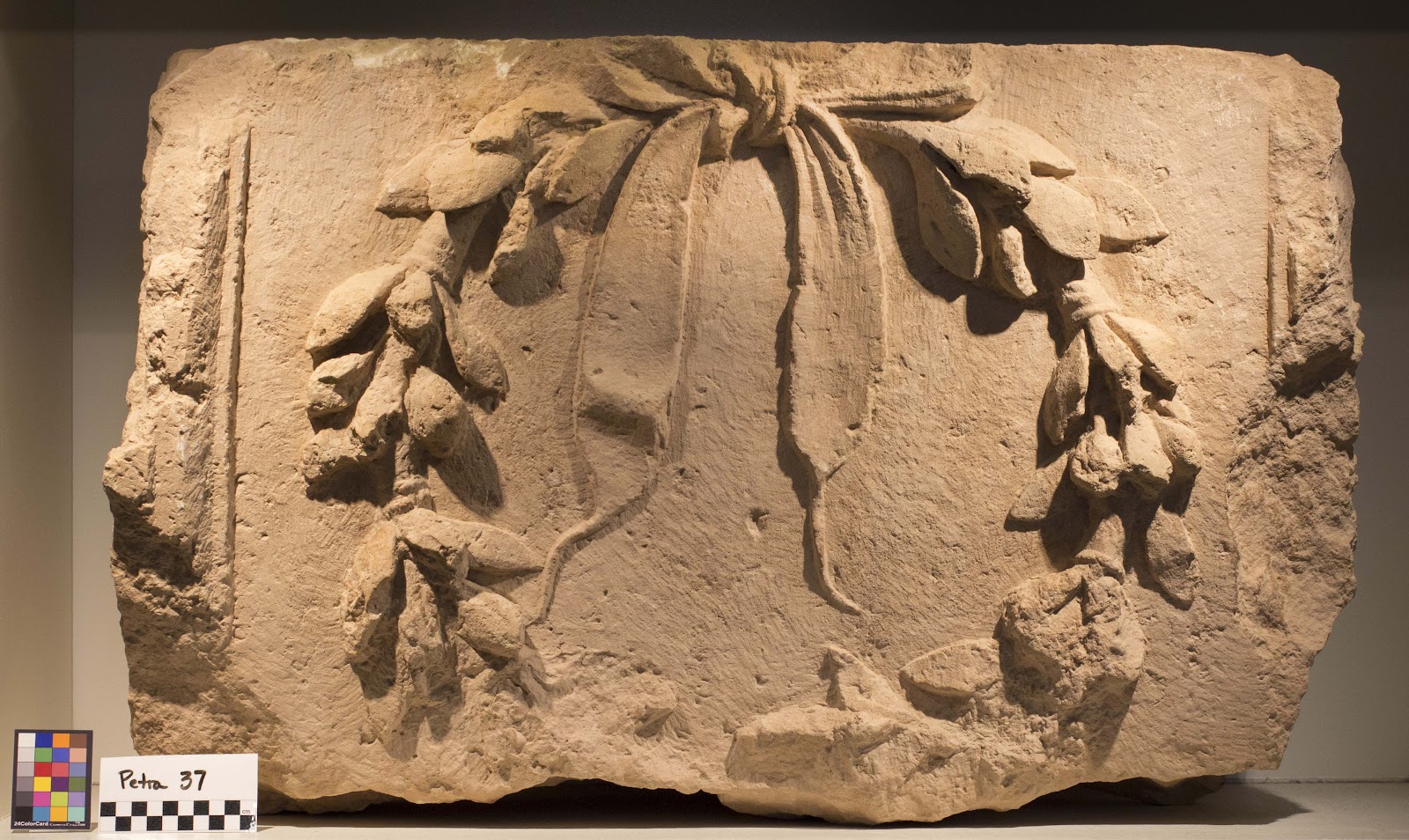