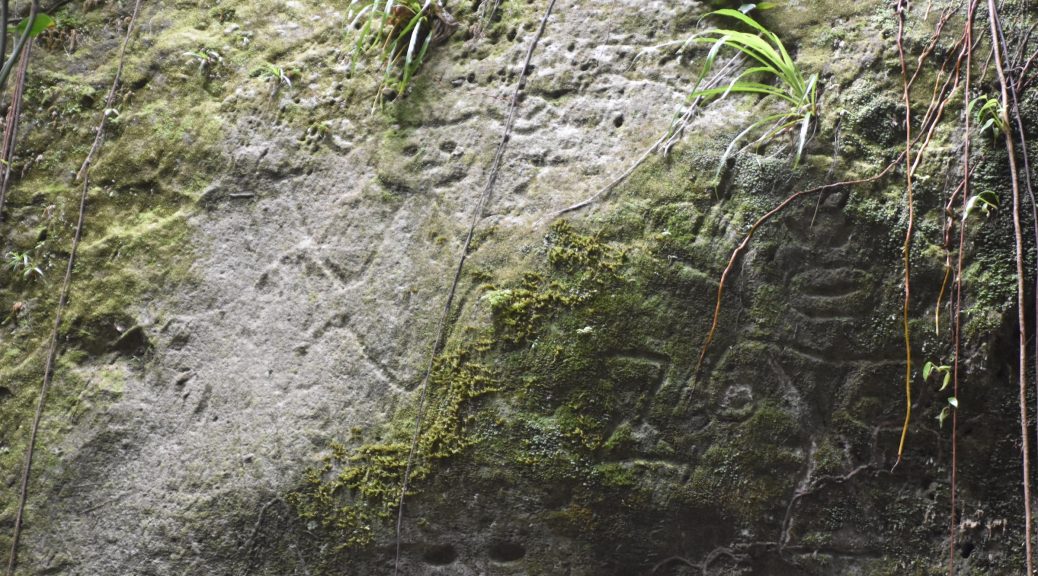 2880 BC: Earliest known date of human activity on Montserrat associated with the remains of stone tool production at the site of Upper Blakes. The tools were made out of chert imported from Long Island, Antigua. Radiocarbon dates taken from a charcoal sample excavated at Upper Blakes dated the archaeological deposits (right).

500 BC: First settlement at Trants by Amerindians. Trants was then occupied for several centuries, through the beginning of the Early Ceramic Age (500-600 AD). It was an important center for lapidary bead / jewellery production in the Lesser Antilles.

1300 AD: Finds from a settlement at Indian Creek suggest that Amerindians were participating in trade networks that extended into the Windward Islands, as well as nearby, to Antigua (griddle rims, left).

1493: Christopher Columbus sails by Montserrat during his second voyage and names the island after the mountainous region in Spain. His fleet does not land on Montserrat.

1632: The first official English settlement is established on Montserrat in the vicinity of Old Road Bay. But some archival sources sugesst that small, unofficial European settlements existed on the island in earlier decades.

1650: Artifacts from Valentine Ghaut and Potato Hill indicate that Amerindians and early European settlers may have exchanged goods and lived in close proximity to one another. By contrast, historical accounts declare that Amerindians (Caribs) were absent from Montserrat at this time.

1660s: Sugar cultivation and enslaved African laborers are introduced to Montserrat. The lime kiln at Foxes Bay (right) produced some of the building materials used to construct the early sugar plantation infrastructure.

1666: Montserrat is attacked by the French with assistance from the Caribs. They cause widespread damage and the island briefly falls under French control.

1673: The first detailed Map of Montserrat is published in the Blathwayt Atlas. The map shows how, in the space of a generation, the island was completely transformed to accommodate the sugar industry.

1678: In the first island-wide census Irish-descended residents make up 78% of Montserrat’s population. The Irish occupied all ranks of Montserrat’s early society – from planters to laborers. Most resided in St. Patrick’s Parish, and many were indentured laborers. None were enslaved.

1735: Peak of the sugar industry. Montserrat’s planters export 3,150 tons of sugar. The island is home to dozens of sugar-producing plantations, each with their own resident enslaved labor force.

1768: On St. Patrick’s Day (March 17) a group of slaves and free Montserratians planned an uprising against the island’s plantocracy in protest of the planters’ brutal, inhumane treatment towards the island’s captive laborers. At the time, the island’s slave population was at its all-time height of 10,177. The uprising was revealed in its planning stages and all involved were punished. Today, the St. Patrick’s Day heritage festival celebrates Montserrat’s Irish legacy but also the resilience of those Afro-Montserratians who planned the uprising, as well as their descendants.

1834: Empancipation on August 1st. Montserrat’s slaves were not immediately freed, but rather entered into a system of apprenticeship.

1838: Apprenticeship ends on August 1st and full emancipation is achieved.

1840: Recently emancipated Montserratians establish primary schools for their children to attend across the island. In 1840 there are 17 schools on Montserrat, up from just one in 1838. SLAM archaeologists excavated one of these schools atop Potato Hill (toys from the Potato Hill schoolhouse, left).

1843: A major earthquake devastates Montserrat in February, launching the island into a generation of economic depression and impoverishment.

1850s-1860s: Montserrat’s citrus lime industry develops under the leadership of the Sturge family and the Montserrat Company Ltd. It thrives until the early 20th century, when it is replaced by Sea Island Cotton. Remains of the citrus lime industry’s presence on Montserrat have been studied archaeologically at The Cot, Elbertons, and Delvins.

1899: Major hurricane devastates the island, damaging most of its citrus lime crops (ruins of the Sturge family residence, The Cot, destroyed by the hurricane).

1979: Sir George Martin opens AIR Studios on Montserrat. It remains active through 1989 and the most famous pop music stars of the 1980s record there. SLAM archaeologists documented its ruins in 2010 and 2012.

1989: Hurricane Hugo damages 90% of the buildings on Montserrat.

1995-present: The Soufriere Hills volcano begins erupting on July 18, 1995. Several major eruptions through 2010 devastate half of the island and bury the former capital city of Plymouth. Today the volcano remains active, but it has been relatively quite for the past decade. Some areas formerly within the exclusion zone have reopened.

Inventory of Archaeological Sites on Montserrat