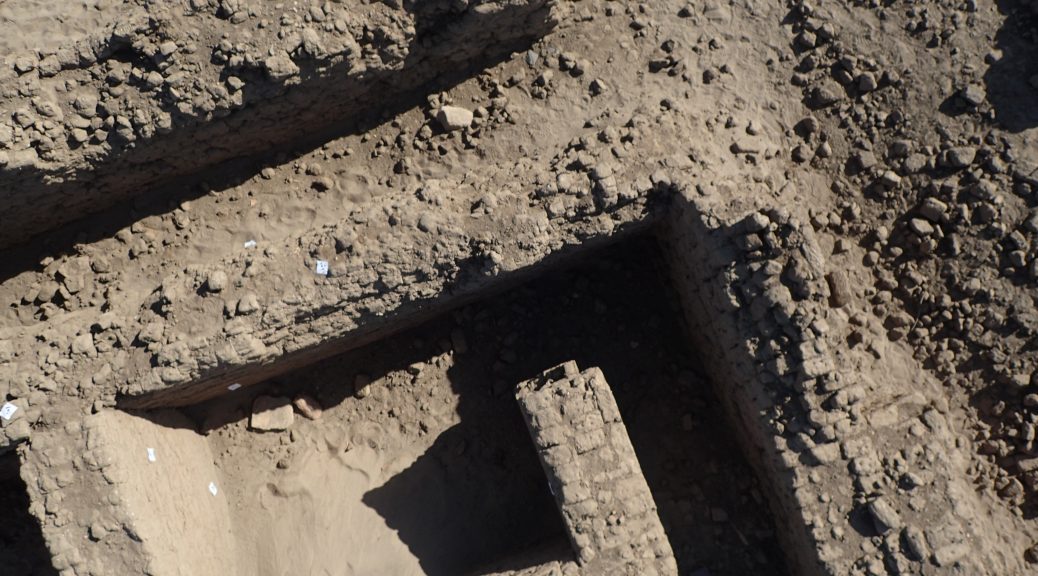 Once inside the main gateway, the first building encountered is a large structure with a long front room that had two columns in it, three long rooms behind that arranged perpendicular to the front hall, and smaller storage magazines to the south. There is debate about what this building is, but we refer to it as the Administrative Building, thinking the most likely explanation for its size, location, and architectural details is that it was the nerve-center of the fort and the primary place where business interactions with the outside world were undertaken.

An important feature of the way the Administrative Building looks today is the heavy remodeling it saw. At some time after its initial construction, very thick additions were built to the walls dividing the long rooms in the back, so thick as to render the rooms themselves almost comically narrow.

Since the original walls were themselves thick enough to easily support a second storey, whose presence is indicated by multiple staircases, it is not clear what the purpose of the thickening was.

Lucky for us, several of the modifications of the second phase, including remodeling of a staircase in the front hall, resulted in construction against the original plastered faces of the first-phase walls. We can tell that the original long back rooms were smoothly plastered with plain mud, nicely finished but undecorated. The front hall, on the other hand, might have been spectacular: traces of red plaster came to light in 2018.

Until we document and remove some of the later architectural features, which we will not do unless and until we have a plaster conservator with us, we do not know if the room might have been simply red or would have had more complex decoration.

That the Administrative Building had an upper floor is strongly indicated by the presence of three stairways. One of these, remodeled at least twice, was in the long front hall. Two additional staircases were in the corridor around the building and were removed by Wheeler. In one case we can still see the location of the treads from the holes gouged in the walls between which the stairs rose; Wheeler called the staircase a later addition, and its builders may have slightly keyed its treads into the earlier walls by cutting these holes. This staircase is remarkable for how shallow it is – a very gentle rise means that it took up much more space than would have been strictly necessary, and suggests a rather ceremonial than purely useful function.

Indeed, one other suggestion as to the purpose of this building as a whole is that it was a temple, but this still seems less likely to us. Pomp and circumstance can equally well be parts of administration, and that the outer room was decorated while the inner rooms were not might suggest that wowing a human audience as it entered the fort itself was more the focus than the needs of divine statues in inner sanctums.

So far, the URAP has only worked on documenting the walls of the Administrative Building, using it as a test case for the iPad recording system we are developing and for 3D modeling with a combination of kite photos and ground photos. Excavating it is a high priority for future seasons.