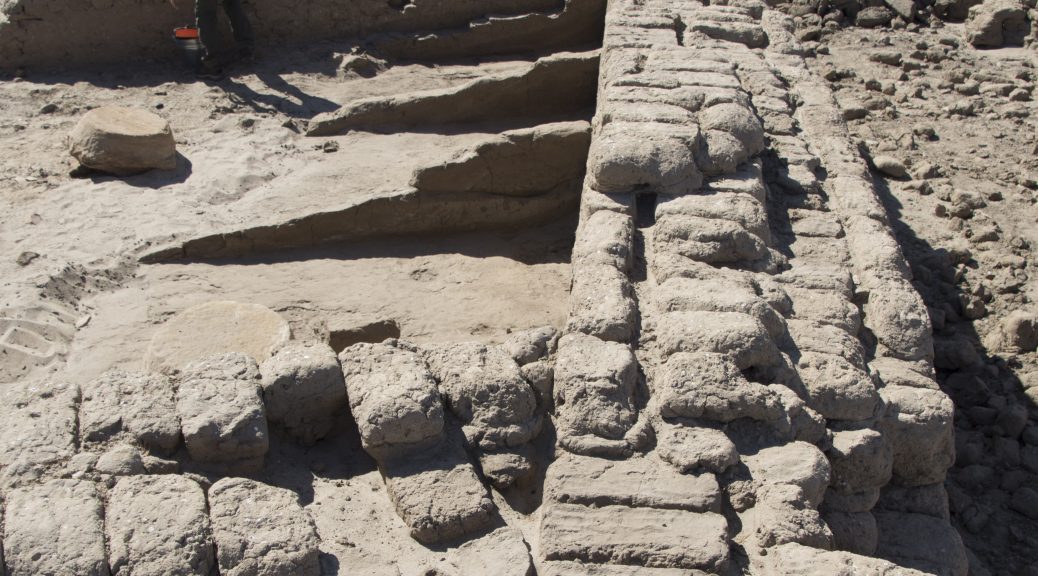 Just inside the main gateway to the fortress lies a building with thick walls and an odd plan. More or less triangular in shape, the building has three rooms, but they are not accessible to one another – their only doors lead to streets. The southernmost, largest, of the rooms, is particularly intriguing. Its door is nearest to the gate of the fortress, protected by a sort of guard’s hut. It had four columns, still represented by sandstone column bases. Its floor was nicely paved with bricks. Its eastern and western sides were divided up by the addition of thin cross walls. What was the purpose of this room?

During the 2018-19 season we opened Unit FA to explore this room, which had been excavated in 1925 during the first exploratory season by Reisner and Wheeler. They designated this Room 5. Amongst their more remarkable finds from this room were a series of weights for gold, all labeled with amounts. Many of these are now in the Museum of Fine Arts in Boston. We bring Wheeler’s finds into our database because they are relevant for our interpretation and must be considered in relationship to what we find.

Our decision to open Unit FA was based in part on the observation of recent looting, which had removed parts of the floor and showed that there were strata beneath the floor. The questions we hoped to answer in Unit FA were about the construction history of the building as well as its subsequent use. We were more than rewarded on both fronts.

Our first task was simply to clean the sand and debris that had accumulated since Wheeler’s team left. The sand dune in the western half of the unit had particularly preserved the floor in that area; all along the west we found multiple replasterings of the brick floor, constant maintenance. We also found embedded in the floor two related things: tons of grain, suggesting this had been an area for grain storage, and tons of mouse poop. It still smelled! This suggested that the grain storage had attracted vermin.

After we cleared the room, we decided to cut three separate holes through the brick floor so that we could see the floor and strata beneath in section, and so that we could access undisturbed areas of the stratigraphy from which to collect material for dating. We started in the eastern part of the room, expanding a hole that the looters had made.

Lo and behold, we found a whole sequence of layers that indeed allowed us to understand the construction better. Lowest was a mud floor, or perhaps a mud working surface, that extended below the east wall of the room. On top of this was an organic-rich layer full of reeds, and a layer of quite clean sand, also extending below the wall. These must date before the construction of the room and seem related to wall construction to the east, where the Administrative Building is found, showing perhaps the order in which the big buildings in the fort were built. Next in order was the wall itself, after which a thick layer of rubble was laid down. This included lots of brick pieces but also lots of broken pots, especially bread molds. The layer itself was probably a fill layer to level the room before the laying of the floor. The date of the material in it is unambiguously mid-12th Dynasty. One of our questions had been if the brick floor was original to the first phase of the fort. The answer is, well, yes, but that first phase itself is more complicated than we had originally been able to see. This space was a construction zone both before and during the building of this room.

In the center of Room 5 we opened another sondage to see how the column bases were related to the brick floor. They are definitely part of it, dating to the same construction event. Here in the middle we also saw evidence of earlier layers, including very rich ash layers above rubble fill, suggesting that the room was a cooking space before the floor was laid, but still well within the initial construction of the fort. In the sand layer we interpret as part of the leveling terraces before the room was built, we discovered a leather arm band, its rawhide stitching still pristine and creases from the sweat of some ancient archer still visible.

On the west our sondage showed clearly why terracing had been necessary: the foundation of the wall was much, much lower than the eastern wall of the same room, and the rubble fill layer correspondingly thicker.

What was Room 5 used for after it was a construction zone and a cooking space during the initial building of the fortress? Its location, architectural details, and finds are at least suggestive.

Grain storage, which may have been facilitated by the small cross walls, though this was not the main granary of the fortress nor are there signs of flour or food preparation here. Columns, which mark spaces of prestige in Egyptian architecture, much as the thick walls mark this as one of the high-level important parts of the fort. A single entrance, pointed towards the gateway and not allowing anyone in the room to get to any other part of the fortress. Weights for gold. What if this were a place where gold miners who were not officially part of the fortress brought their finds to trade for grain?