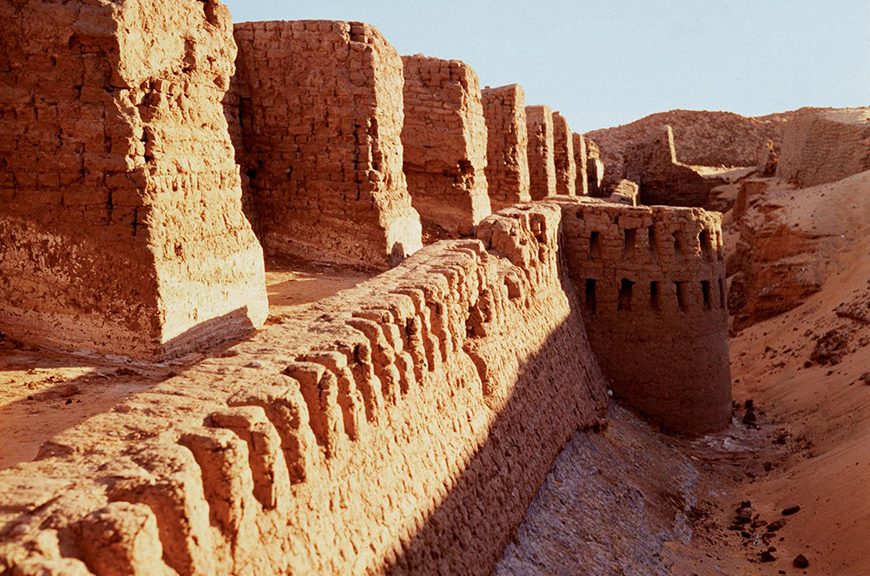 Uronarti is one of a string of massive mudbrick fortifications with thick walls and military installations such as dry moats and arrow loops that are awe-inspiring in their size and for their great antiquity. The Egyptians heavily fortified this region for a variety of interconnected reasons. The deserts in this area were rich sources for gold-mining – indeed, there is a current gold rush in the area, and the URAP has accidentally driven into gold mining camps while trying to find the desert track between the road and the river more than once. A growing Nubian power was developing to the south, based at the site of Kerma, and this was a military threat to Egypt’s south. The Nile was also a critical corridor for trade with sub-Saharan Africa, and the Middle Kingdom kings of Egypt wanted to control that trade. Finally, building massive, intimidating buildings was a display of the wealth and prowess of the pharaohs. Economy, military needs, and royal ideology meshed into Egypt’s first great colonial expansion, and the forts of Lower Nubia were an integral part of it.

The system of forts was initiated in the early 12th Dynasty, around 1950 B.C., and reached its apex in the later 12th Dynasty, under the king Senwosret III, who reigned from approximately 1878-39 B.C. When complete, the fortress system controlled the approximately 320km (200 miles) from the traditional southern border of Egypt at the First Cataract at Aswan south to Semna, just upriver from the Second Cataract.

The fortresses themselves are of varying types, with differences related to geography, purpose, and chronology. The northern forts, such as Buhen and Mirgissa, were built on level ground and are regular in shape, with rectangular inner fortifications encompassing densely built interiors with housing and granaries, and an exterior ring of fortification beyond. Written evidence, including seal impressions from the forts themselves, letters sent back and forth between fortresses and the government in Egypt, and stone stelae with royal texts on them, give us a good idea of the administration and purpose of these forts. Mirgissa, for instance, is mentioned as the place to which all Nubians should go to do trade – they should get off their own boats, and onto Egyptian boats, at the southern fortresses and then go north to exchange goods (on Egyptian terms, as well as Egyptian transport, no doubt). Buhen, with its immense area enclosed between the inner and outer fortifications, is easy to imagine as a sort of caravanserai, protecting not only its garrison on the inside but also those who came with valuable goods to do business. These forts were established already in the early 12th Dynasty.

The southernmost forts are in rockier areas. They are smaller, less regular, closer to one another, and were built slightly later, under Senwosret III. This king also expanded some of the northern fortresses. Uronarti is one of the southern fortresses, and its situation atop a high rocky spur on an island in the Nile is what saved it from the rising floodwaters.