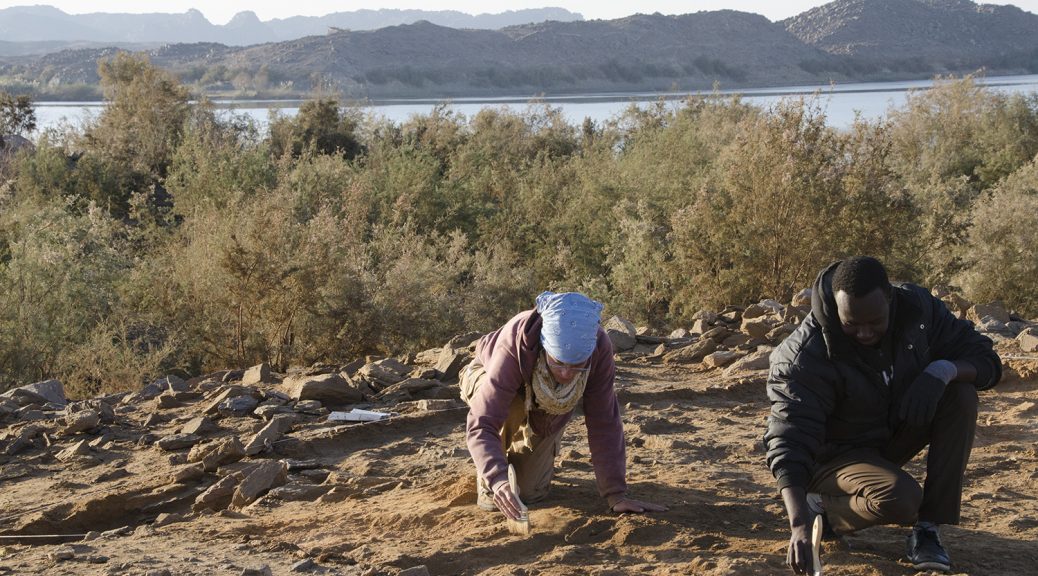 Site FC is an extramural settlement contemporary with the fortress. (If you are a Brown student, you may well know the somewhat embarrassing story of how the site got its name.) FC consists of the remains of a number of stone huts occupying two low hills on what is now the east bank of the island, about 250m (820 feet) south of the fort.

We discovered this site, which previous work on the island had not found, during pedestrian survey in 2012, alerted first by the presence of ceramics on the surface and then by suspiciously regular groups of tumbled stone.

Kite aerial photography in 2013 greatly clarified the nature of the stone tumbles, and we have since excavated four units in FC. Roughly circular rooms of dry stone with diameters ranging from 2.5-4m are considered much more characteristic of indigenous Nubian settlement patterns than Egyptian ones, but the picture at FC is complex.

The first area excavated revealed that the tumbled stones were indeed part of a dry-stone construction with a D-shaped base. There were not enough stones present to have built high walls, suggesting that the upper portions of the hut were constructed in perishable materials. One of the interior corners of the hut had the remains of a hearth, and two trash-pits outside the doorway contained a wealth of broken ceramics. A short wall attached to the outside of the hut seems to have served as a wind-break to create a small storage area; in its lee we found remains of large vessels. The hut was badly eroded and its deposits had been further eroded by spiders tunneling and tree roots since the level of the water rose. No notable stratigraphy was present, but all of the recovered ceramics were familiar Egyptian types and wares that are also found at the fortress.

Subsequent excavation of three adjacent units was intended to illuminate one of the larger and more complex huts that appeared from the surface to be a honeycombed cluster of connected rooms. This proved to be the case, though the doorways between rooms, if there were any, could not be clarified. Again there was large disturbance from biological factors, but once more a moderate amount of broken pottery was recovered. No other objects have been found at Site FC, but a moderate amount of faunal bone has been found. This included a fairly high percentage of large animal, principally cow.

The ceramics from FC are noteworthy. They include transport vessels, storage vessels, and hemispherical cups (some used for cooking). Some of the large vessels are reconstructable but are lacking their rims, perhaps suggesting they are in a context of reuse. The percentage of diagnostic sherds is on the whole remarkably low. A number of sherds were repurposed into tools, with characteristic wear-patterns. The ceramic assemblage is entirely consistent with a Middle Kingdom settlement site. In comparison to the artifacts we have excavated at the fortress, the FC assemblage, including from our initial intensive surface collection, is notable. It lacks bread molds and stone tools, both common at the fortress. It also lacks Nubian ceramics, which, while never common at the fortress, are an unavoidable part of the record up the hill. Finally, it appears to be more restricted in date, being concurrent with the first part of the occupation of the fortress but falling out of use prior to the abandonment of the fortress.

How does Site FC change our understanding of life at Uronarti? In the first place, it forces us to recognize that the imposing fortresses were not alone, were only part of a more complex landscape. No previous work had identified settlements in this particular region, and here we have one that is contemporary with the fort, and large. While we have found only about 25 dry-stone rooms, some as free-standing huts and some grouped in clusters, aerial photographs from before the Aswan High Dam was built suggest that similar remains once covered a much larger area.

How people lived here was very different from life at the fortress. There was no wall enclosing them, with all the attendant differences not only in protection but also in restriction of movement and vision. No streets controlled traffic. No buildings other than huts that seem to have been used for dwelling were found, nothing of the large storage or administrative character of the fort. Walls were not straight, nor were they brick. Getting water would have been much easier, as would going fishing and keeping animals.

Who lived at Site FC? This is a tricky question. The good old archaeological adage “pots do not equal people” is very relevant here: it reminds us to be wary of assuming that Egyptian pots are necessarily indication of Egyptian people. By the same token we should be wary of assuming we have Nubians just because we have a type of architecture that is “Nubian”.  But the ceramics from FC are not isolated pots, they are a complete Egyptian assemblage without any other material. Egyptian ways of cooking and eating are a much better indication of Egyptianness than Egyptian pots alone would be. But then, we are not looking at a round stone hut or two, but a whole settlement that is entirely different in its built character than the indubitably Egyptian settlement in the fortress. Not just ways of building, but expectations of movement and the social relations enabled by the character of a settlement look Nubian. So, who lived here? A population dependent on the fortress in its early phases. A population that we cannot characterize with confidence in simple ethnic terms, fitting for this entangled place.