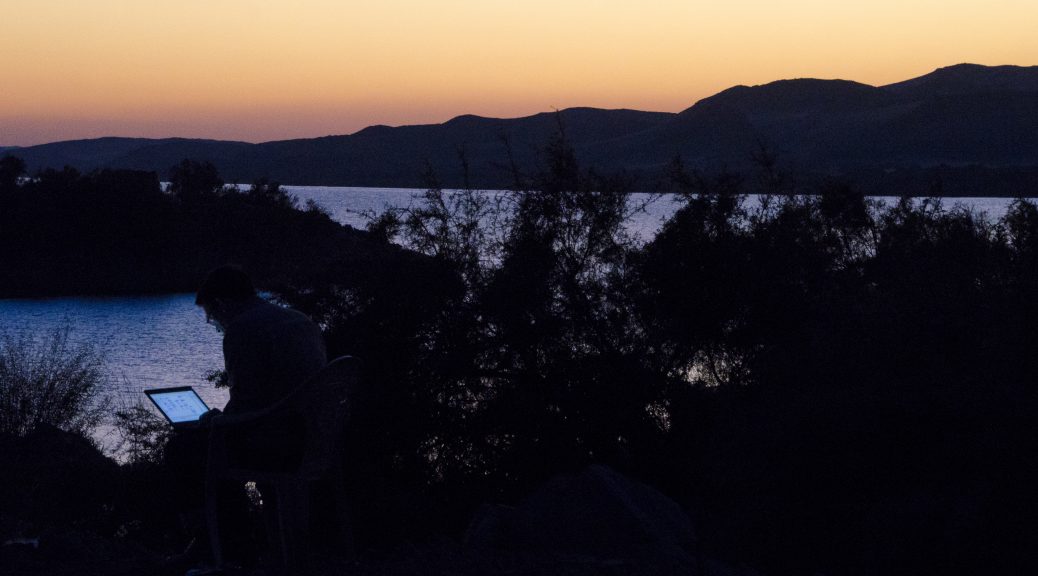 That Uronarti is so remote presents us with challenges and opportunities – we have no internet, and very limited electricity from running a generator a few hours a day. From the beginning the URAP has been interested in utilizing technology to help overcome some of the challenges.

iPads in the desert

Recording archaeology on a tablet instead of paper has many advantages. It allows the integration of all sorts of data, from maps drawn on survey data, to photographs, to daily narrative records of what excavators do, to context records. It allows everyone on the team to have access to what everyone else is doing. It cuts down on human error, with computer generated numbers and no mistakes made in transferring data from paper into a digital database later. Duplicating the data is easy and reduces the threat of lost records. And absolutely everything is searchable and linked already when one leaves the field. We were initially somewhat leery of adopting tablet recording in Uronarti – would it really be possible to see screens in the desert glare? Would typing while leaning into the wind and trying not to fall off a wall be as easy as writing? But it has proved to be a valuable tool.

While many archaeological projects are developing tablet recording, we were unable to find a system that already existed that would work both with the type of archaeology we were doing and the type of living situation we were in. Without the internet, synchronizing records made by different people – excavators, surveyors, ceramicists, photographers – was not immediately possible. In 2015 the project software developer began work on a system to allow us to record and synchronize on tablets. We first used the recording system in the field in the 2015-16 season, testing it against paper recording. It was so much easier to use that we quickly abandoned paper.

Development is ongoing, now supported by a Digital Technologist in Archaeology position at the Brown University Library.  The system, now formally named Kiosk Archaeological Recording Platform, includes not only the tablet-based recording piece, but also a browser-based data management system. It allows for extensive customization and configuration so that other projects can use it to support their own workflows. During the first years of development, projects from Wellesley and Roanoke College field-tested the system after working with us to make it fit their project needs. The Brown hands-on course excavating in Providence Rhode Island has used Kiosk for the last several semesters. In the summer of 2022 Kiosk is being used by Brown projects from Peru to Sardinia to central Italy. From all our users we gain valuable insight and ideas about new features to incorporate; for instance, this year to help the two projects working in Italy we designed a mechanism for producing reports from the data that are highly customizable to meet the needs of reporting to the government.

One unique feature of the software is that it allows the use of the iPad as a photoboard – rather than writing the context on a board and putting that in a photograph, the user can generate a QR code on the iPad that, when placed in the photograph, allows a computer to automatically sort the image into the right place in the database. We were skeptical ourselves if an iPad could be a good photoboard, but test runs were successful even when we challenged the camera! We can now sort all of our images automatically.

3D modeling from photographs is, like tablet recording, becoming standard in archaeology. At Uronarti we are using well-developed tools to make such models. Our challenges here come from the scale and complexity of the architecture we are modeling, and from the tools at hand – we have been using kites rather than drones for aerial photography.

Modeling is important to us at Uronarti because the size of the fortress is so huge – we estimate there were over 3 million bricks in the outer walls alone – and its phasing so complex, that we cannot hope to record it using traditional methods in the short winter seasons we have.

Where we excavate we also create models, in this case using hundreds of photographs taken from the ground. We use the models to produce plan-view rectified photographs on which we can produce drawings. It is faster than traditional planning and produces a scalable drawing from the beginning. The models themselves are useful in outreach, showing what the architecture is like to those who have not been there – below you can see a video of the model from Unit FA, excavated in January 2019, and the plan drawn in the field with the aid of the model.

A longer term potential goal of ours is to use the models in both analysis and map-making once we are back from the field. We have started to work with the Center for Computerized Visualization at Brown, where we can project our models in the immersive virtual reality environment called the YURT. This is not yet a useful method, but in the future, we do hope to develop software that allows us to mark the models while experiencing them virtually, so that the whole team can “walk” around the site in the YURT, having the kind of phasing discussions we have on site, and making maps immediately upon the model.

Technology is a sector where we need much support. If you have either expertise and time or money to donate, please contact us!