The fortresses of the Second Cataract did not exist in isolation in their landscape. One goal of the URAP is to investigate the regional context of Uronarti. In 2019 we formally inaugurated a campaign of survey primarily focused on the Western Desert. In eight afternoons of survey we documented 100 features in nine survey units. 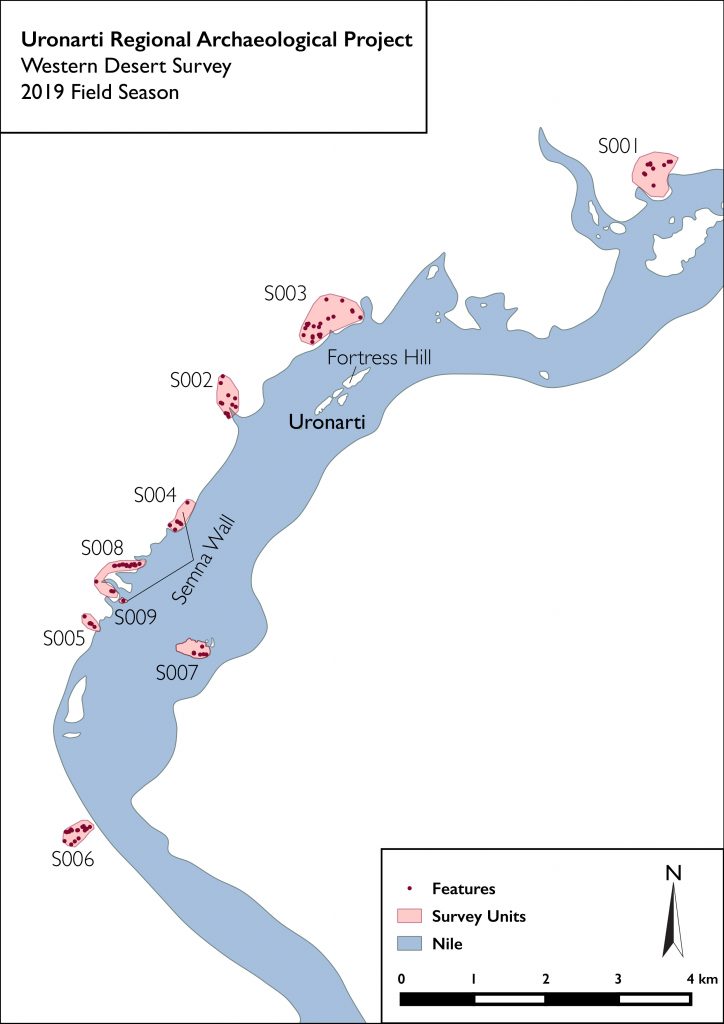 While extensive survey had been done in the region prior to the flooding of the landscape, those surveys concentrated on areas near the river. That made sense, both because that was the area that would be lost, and because ancient settlement was most likely in places with easy access to the water. Still, it turns out that there are extensive traces of human activity much higher up, in the areas still certainly related to the river but not as easily reached from it in ancient times.

The method of survey, which was designed by Evan Levine and Miriam Rothenberg, differs somewhat from standard Mediterranean landscape archaeology. Instead of walking transects looking for artifacts on the surface and then documenting features, both the terrain and the nature of the remains made it more practical first to identify features, often using satellite imagery. Once found on the ground, those features served as the points from which radial ground-walking was undertaken.

Recording the survey was done with a newly developed part of the iPad recording system we are creating. The advantages of iPad recording in this case include that it is very quick and easy to take photographs already assigned to feature numbers, and that the workflow for analysis is folded into the project as a whole. While field walking is a different method than excavation, the registration and analysis of artifacts is the same, and data synchronization and backing up take place simultaneously. In addition to notes and photographs made with the iPad, recording included gps location of features and sketches by project architect Abigail Stoner.

Most of the features identified so far are dry-stone circles, and most are of uncertain date. Some are clearly recent. Only a small proportion of those found so far are associated with artifactual finds on the surface. Where that has been the case, the ceramics have been Middle Kingdom Egyptian types well represented at the fortress itself. Our initial interpretation is that at least some of these stone circles may be the remains of lookout stations that were only occasionally occupied. We have long been interested in how fortresses might have communicated with one another in this region; as we were starkly reminded this season, the ability to signal both by vision and by sound is dramatically affected by conditions. Preserving communication in a sandstorm would have required a much denser concentration of outposts than on a clear, calm day!

Whether or not this specific function was behind the construction of the desert features, they show a more diverse and intensive Egyptian presence in the region than existed within fortress walls alone. They should be analyzed in combination with the finds from Site FC.