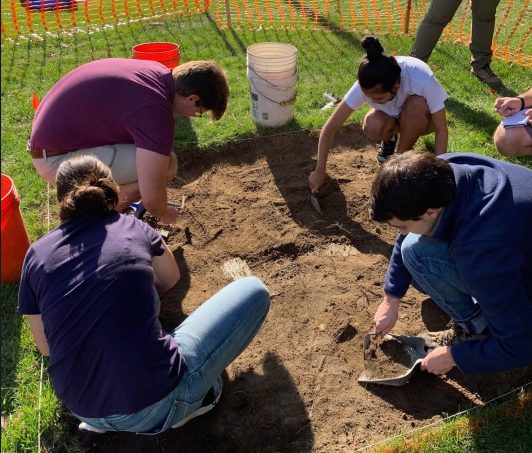 What material traces of the past might still be present, right under our feet, as we go about our daily lives? The Archaeology of College Hill explores this question, through excavations conducted by Brown University students at sites on and around Brown’s campus in Providence, Rhode Island. The project has been ongoing since 2005, and is conducted in conjunction with an undergraduate course offered by Brown University every year, ARCH 1900 The Archaeology of College Hill.

Since 2015, the Joukowsky Institute for Archaeology and the Ancient World has been collaborating with the Moses Brown School, to conduct an excavation on Moses Brown’s school grounds (immediately adjacent to Brown University’s campus). The excavation has gathered a wide range of information about the construction and demolition of the Sack House, along with smaller details about the material culture of the house’s residents.

Prior to the current work at Moses Brown, the class excavated on Brown’s main campus at the site of Brown’s first president’s house in an effort to better understand the material history of student life. Earlier fieldwork was conducted at the First Baptist Church in America and the John Brown House, home of the Rhode Island Historical Society.

In partnership with the Moses Brown School, a team led by Brown University students is excavating a site on the East Side of Providence, formerly known as the Sack Property. The piece of land was purchased by A. Albert Sack in 1884, when a house was built on the spot pictured below. An outbuilding is also visible at the southeastern corner of the property, where a large tree sits today along the Lloyd Ave fence.

A. Albert Sack was the founder of the Lymansville Company Mill. He emigrated from Germany in 1866 and opened the mill in 1884. Sack lived in the house with his wife, Alice, until his death in 1925, and she remained there until her own death in 1933. Their son kept the house for an undetermined length of time after their deaths, and in 1939, the Moses Brown School bought the property. The house was demolished in 1940.

The Providence Housing Directory suggests that a number of craftspeople and individuals with professions like Sack’s (clerks, shoemakers, physicians, etc.) were living in this neighborhood at the turn of the 20th century. Historical maps of the area also show a large increase in the number of schools, and we know this was a period of expansions and prosperity for the Moses Brown School, as well. Through this excavation, archaeologists hope to discover more about the material history of Providence, the Sack family, and the Moses Brown School in the early 20th century.

Beginning in 2017, students in ARCH 1900 have posted updates on the excavation’s latest finds, historic research, and anything else they came across to the class’s Facebook page. In 2015 and 2016, students posted Site Diary entries on this blog. Site reports from excavations prior to 2015 can be found on past ARCH 1900 websites.