Today, we had a spooky time excavating at the Moses Brown site on October 31, or Halloween. Although we didn’t find any skeletons, we still had a very productive day, and the weather was perfect for digging. Both the trenches were a little messy today, with soil moved around the surface, considering it rained for most of the day yesterday. In both trenches, we have started to reach a new, yellower soil that has more clay in it. Trench MB4, which had Sean, Alok and Sasha working in it today, was trying to reach a new context (Context 4) by digging down to the clay soil in all areas of the trench. Similarly, trench MB3 was also trying to uncover the yellow soil more uniformly. 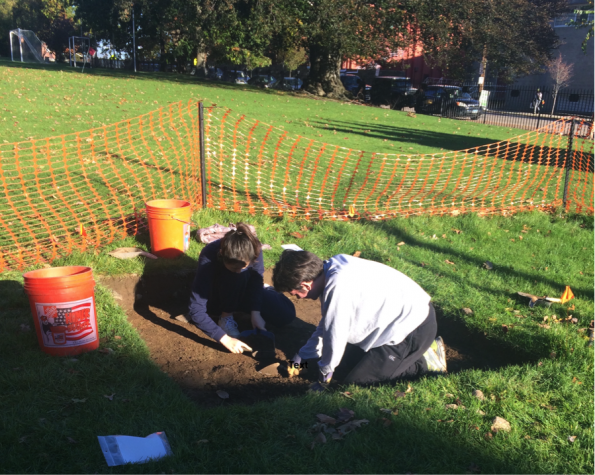 Before talking about today’s excavation, I’ll give a brief history of excavations in both trenches so far. In MB4, we dug down 10 cm. and then started context 2, where almost immediately we hit a soil change when the dirt got very gravelly. Then, we created a new context, context 3, which is where we began today. MB3 went down two contexts and then created context 3 when the dirt became mottled yellow and dark brown (2.5Y 7/8 and 10YR 3/2 respectively, according to the Munsell Soil Color Chart).

I worked in MB3 today, where so far we have uncovered a few larger rocks on the north side of the trench. We began by simply scraping a top layer of dirt off to get rid of any soil changes due to the rain. After that, we spent most of the class period uncovering yellow dirt. We found a large nail, about 8 cm long, where we think the corner of the house should be if our GPR-based (Ground penetrating radar) trench placement is correct, as well as two more large nails along the north wall. (See nails next to slate in the picture below). We’ve also found a lot of brick pieces in that area as well. After a while, it became apparent that the northern side of the trench is very clearly dark brown dirt and rocky, while the rest of the trench showed the yellow dirt. It’s unclear what this division is coming from, but it did prompt us to close out context 3 in order to create two new ones, context 4 and 5, the northern side with brown dirt, and the rest of the trench with yellow dirt. 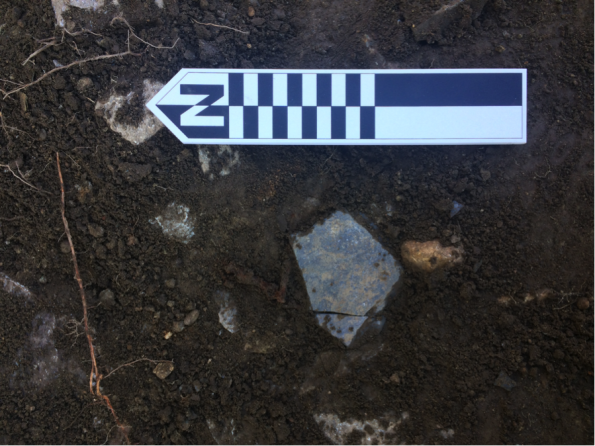 In the picture below, you can see five of the artifacts found today in MB3. The thin reddish piece in the upper left is brick, as is the squarish piece to the right. To the right of that is a piece of coal. Under that is some sort of rock that we think may be asphalt, but are unsure, and last, the bottom left is a large piece of flat slate. 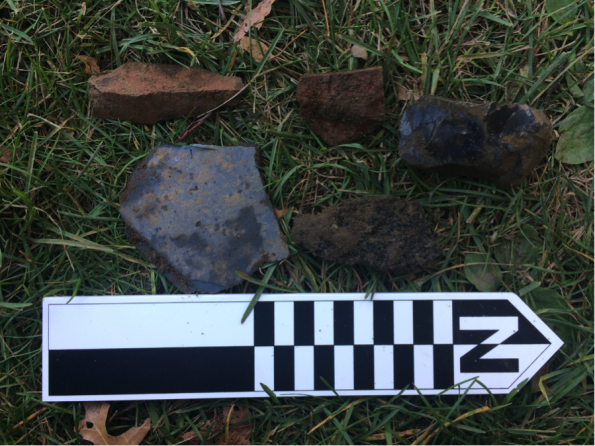 I’m very curious to uncover more of these large rocks, and to figure out why we may be seeing this split between the dark and light dirt in MB3. All in all, it was a productive day, and as we have very little time left to dig, we’re hoping to continue getting deeper next week.