Scholarship and Stone: A Social and Architectural History of the Providence Athenaeum

“The object of this institution…is to provide the means for the universal diffusion of knowledge, of knowledge in its most extensive signification, among the citizens of Providence.”[i] Thus spoke Francis Wayland, president of Brown University and co-founder of the Providence Athenaeum, at the library’s founding on July 11, 1838. The demographics of library patrons and the city of Providence itself have changed since the 19th century, as has the library’s physical construction. However, all of the modifications made to the Athenaeum’s architecture since its founding reflect the library’s primary goal of dispersing knowledge to the people of Providence.

The story of the Athenaeum begins before the building itself, with the creation of the Providence Library Company in 1753. The company was started by elite families of New England, most notably Stephen Hopkins, member of the Rhode Island General Assembly, signer of the Declaration of Independence, and a primary figure speaking against England preceding the American Revolution.[ii] The original collection imported from London, though modest, housed classics such as Homer’s Odyssey and More’s Utopia.[iii] By the 1820s, Providence had experienced a shift from trading to a mercantile economy, hugely expanding and diversifying the city.[iv] A new emphasis was placed on education in the 1830s, and a public high school was founded in 1838. In keeping with this theme of providing opportunities for self-improvement to a larger audience, the library expanded its collection as well as the diversity of proprietors of the library, which now included Irish and French, as well as merchants and craftsmen.[v] On January 25, 1836, the Providence Library Company officially merged with a preexisting competing library, the Providence Athenaeum, to form the modern day library.[vi]

The most significant advancement made by the Athenaeum was the acquisition of a grant to build a house for their ever-expanding collection. On March 9, 1836, Providence businessman and philanthropist Moses Brown Ives offered a plot of land and a donation on the condition that his donation was matched by subscriptions.[vii] Thus began the construction of the building on Benefit Street that houses the modern day Athenaeum. William Strickland, an architect from Philadelphia, was hired to design the building.

The Athenaeum, constructed primarily of large granite blocks, was built in Classic Greek style. The entrance boasts two Doric columns and a prominent pediment above the double doors, with a centered set of steps leading up, as can be seen in Strickland’s plans (Figure 1). The façade, as well as the interior of the building, is entirely symmetrical. This simple yet impressive architectural design is clearly influenced by neoclassical styles popular in America in the mid-19th century. Reminiscent of Classical buildings of antiquity, the building harkens back to Athens itself, a connection that was not an accident. According to the Athenaeum’s Annual Report, the purpose of the library was to provide “the choicest moral and intellectual influence” to “all classes” of Providence inhabitants.[viii] In fact, the board of the Athenaeum boasted, “There is no other mode in which access to so much knowledge and to such varied resources of intellectual gratification and improvement can be obtained at so cheap a rate.”[ix] Influenced by Providence’s growing focus on expanding education, the goals of the Athenaeum were very much in line with values of democracy and a celebration of morality and knowledge for which Athens was famed. The explicitly Roman name, the Athenaeum, as opposed to merely a “library,” also draws connections to the Greek and Roman Empires. This Classical building imparts upon library patrons that it is an important place dedicated to the pursuit of learning even before they have entered the building. To great fanfare, the building was officially dedicated on July 11, 1838.[x] 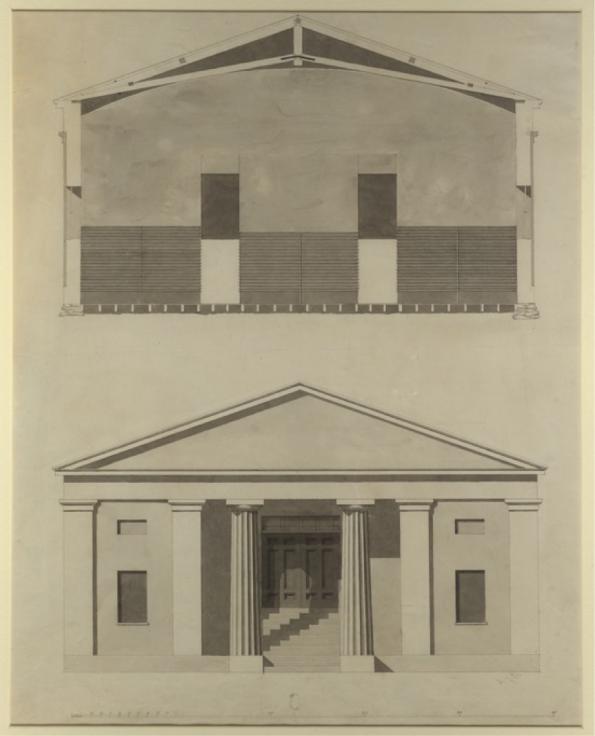 Any reconstructive changes of the building over the years were made only when the Athenaeum could afford the funding, whether through a donation or through a prosperous season. During the decade after founding, the library ran into problems that required expensive changes to be made to the building. The shelves overflowed, the ceiling was unsupported, and the roof, made of zinc rather than more expensive tin, leaked. After receiving a significant donation from merchant Cyrus Butler, the library found funding to perform these reconstructions. The Seventeenth Annual Report describes the changes made, including a new heating system, a reconstruction of the basement including creating a new reading room and more shelving, and new cast iron pillars to hold up the ceiling. [xi] More changes were made immediately following the Civil War, as Rhode Island’s economy was booming. In 1862, tables were added on the first floor and cupboards were added to better protect books from humidity. In 1873, a donation from Anna Richmond was used to build a Gothic granite fountain outside, still existing today, which says, “Come here everyone that thirsteth.” However, it took much longer to connect Pawtuxet water to the fountain, as is lamented upon in the annual report from 1873.[xii] The fountain can be seen on the left in a 1906 photograph of the building (Figure 2). Even without water, the fountain added Gothic glamour to the otherwise simple neoclassical design, and represents the nationwide shift in American fashion from neoclassical to more intricately decorated Gothic styles. 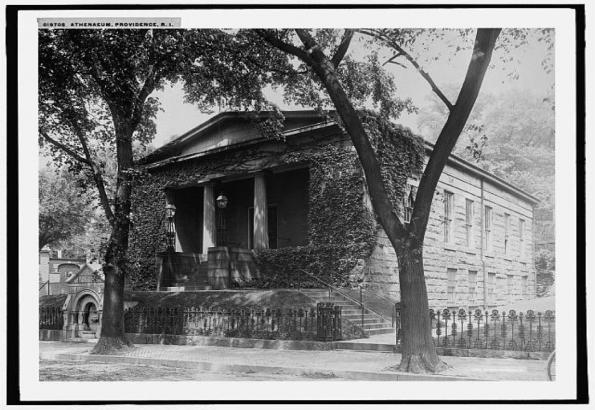 In the following century, changes to the building were made primarily in order to create more space for the library collection and to draw in new, younger readers. This focus on children and their place in society was in keeping with the Progressive Era concern with child welfare and nurturing child development.[xiii] In 1911, plans were begun to expand the lower level and to create a children’s room. Norman Isham, a prominent Federalist and Greek style architect, designed the expansion in 1914.[xiv] The Athenaeum’s other major construction project in the 20th century, designed by William Platner, was completed in 1978. The project has been described as a continuation of Isham’s addition, as it merely consisted of expanding the Athenaeum to the house next-door. (See Figure 3 for location of house in relation to the Athenaeum). The addition, which officially opened in 1979, included the Sayles Gorham Children’s Library, as well as a lecture room and a rare books section. 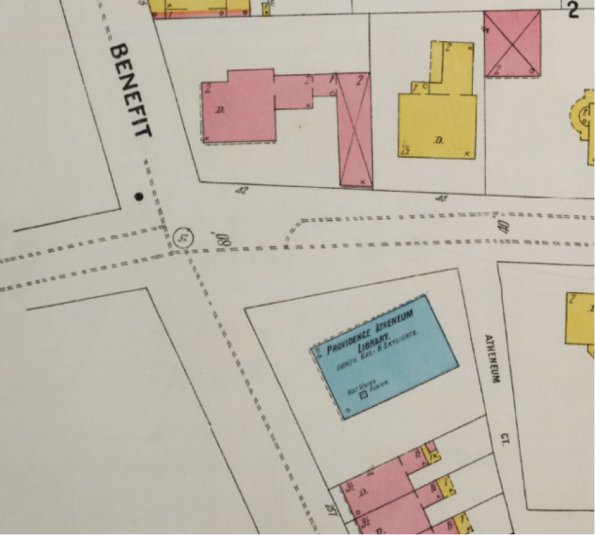 These three sections of the Platner addition are indicative of the varied role the Athenaeum plays in the Providence community today. The Athenaeum is much more than a library; as intended by its founders, it is a place that brings the community together through a love of learning, whether through children’s education, lectures, research or simply relaxing in the reading room. Nearly every expansion and construction project since the Athenaeum’s founding has centered around allowing the community to better access the “treasures of human thought,” as Francis Wayland phrased it, housed within.[xv]

[i] Francis Wayland, A Discourse, Delivered at the Opening of the Providence Athenaeum, (Providence: Knowles, Vose and Company, 1838), 4-5.

Wayland, Francis. A Discourse, Delivered at the Opening of the Providence Athenaeum. Providence: Knowles, Vose and Company, 1838.

Some Brown students may know it as the site of the annual Midnight Halloween Organ Concert, others may recognize it as the home of the Concentration Fair, and yet still others may identify it as the building in which, this past spring, Emma Watson received her degree. The building in question is of course, Sayles Hall. A mainstay on campus since 1881, Sayles stands in stately fashion on the eastern perimeter of the Main Green, directly across from University Hall and abutted by Salomon and Wilson halls on the north and south, respectively.

END_OF_DOCUMENT_TOKEN_TO_BE_REPLACED

Two classical statues – often misidentified, confused, and abused – have watched over campus life since they were dedicated more than 100 years ago. Marcus Aurelius and Caesar Augustus guard their greens, providing a block for studying students to lean against and an elevated platform to advertise everything from events to holidays. These statues, modeled on Roman originals, were gifts of Moses Brown Ives Goddard, class of 1854. END_OF_DOCUMENT_TOKEN_TO_BE_REPLACED