Registration is now open for our summer pre-orientation event.  Learn more about it here.

War Without End: Bringing Context and Assessment to America’s Conflicts 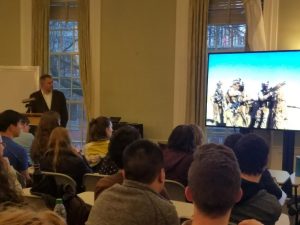 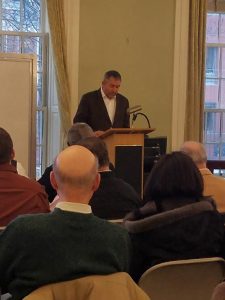 Pulitzer-Prize winning author and combat veteran C.J. Chivers sat with students from Brown University and the Naval Academy Preparatory School for a small group conversation about war reporting. The conversation ranged over a variety of topics including, but not limited to: the representation of the military in the media, the role of patriotic language in and out of the military, the structural impediments to reporting on specific events, and the ethical challenges presented by having access to detailed information. The students also engaged with one another, sharing their distinct experiences and perspectives, while in conversation with Chivers and during an informal dinner after the event. 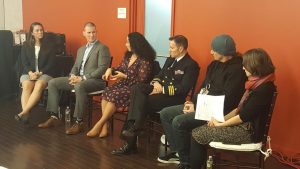 This event, a conversation about the ways in which Othello speaks to the experience of being a soldier, was part of the Context & Conversation series co-presented by the Providence Public Library and the Trinity Repertory Company. This particular event, co-sponsored by Brown University’s “Dialogues On the Experience of War” initiative, brought together a panel of five experts to ask and answer questions in dialogue with the public. The panel shared personal stories, discussed the play itself, and spoke about the current staging by Trinity Repertory.

They discussed how Othello expressed the experience of being a service member returning home from war. They also discussed the ways the play captured and failed to capture the contemporary American military and the burden of military leadership. Panelists also discussed the tension between conformity and cohesion vs freedom and individualism in the military.

Irregular Warfare has been invited to join an event sponsored by the Taubman Center for American Politics and Policy at Brown University. We extend that invitation to you!

Who Supports War & Why? Sources of the Gender Gap in Support of War

Throughout the winter, Irregular Warfare has been pairing veterans and humanities scholars with high school classrooms around Providence. The animated conversations have covered a wide variety of topics including terrorism and its implications in modern-day society, the Vietnam War, and literature. 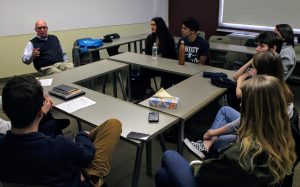 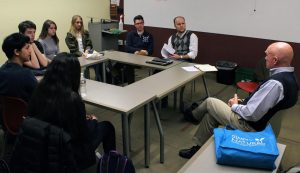 This event, planned in coordination with Helen Benedict’s visit to Brown University, was designed to take advantage of her expertise on the topic of sexual assault in the military. The participants — Brown University students and Naval Academy Preparatory School (NAPS) students — were all interested in, or had experience with, advocacy related to sexual assault (sexual assault counseling, peer advising, victim advocacy, etc.). The event was designed to give these interested students — some civilian and some military — the opportunity to chat with each other, and with an expert on the topic. During their time together, they participated in an informal and loosely moderated discussion about the similarities, differences, and unique challenges that sexual assault poses in their respective environments. 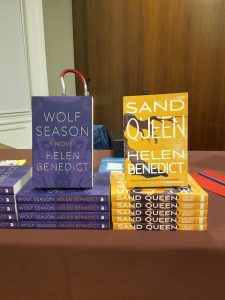 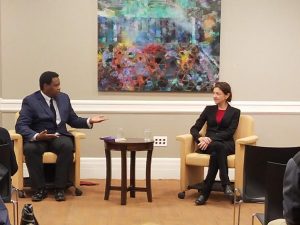 Helen and Maurice discussed Helen’s work on war, women, and the aftermath of war. Helen read from her new novel, Wolf Season and answered questions from Maurice and the audience.

Helen Benedict, a professor at Columbia University, is the author of seven novels, including her latest, Wolf Season, and Sand Queen, which was recognized as a Best Contemporary War Novel by Publishers Weekly. A recipient of the Ida B. Wells Award for Bravery in Journalism and the James Aronson Award for Social Justice Journalism, among other awards, Benedict is also the author of five works of nonfiction, including The Lonely Soldier: The Private War of Women in Iraq, as well as a play, The Lonely Soldier Monologues. Her work inspired a suit against the Pentagon and the Oscar- nominated film, The Invisible War. www.helenbenedict.com.

Maurice Decaul, a former Marine, is a poet, essayist, and playwright, whose writing has been featured in the New York Times, The Daily Beast, Sierra Magazine, Epiphany, Callaloo, Narrative and elsewhere. He teaches playwriting at the Trinity Rep Veterans and Theater Institute, in Providence.

For more information on Helen’s Visit to Brown

The Invisible War is an investigative look at the current epidemic of sexual assault within the military, the profound personal and social consequences of these actions, and the institutions that cover these attacks. It includes interviews with lawmakers, military personnel and the victims themselves. This groundbreaking film went on to be nominated for an Oscar and is based off of Helen Benedict’s 2010 book, The Lonely Solider: The Private War of Women Serving in Iraq.

This screening of The Invisible War is sponsored by the Gender and Women’s Studies Program, Division of Student Success, the Unity Center, VetSuccess on Campus & Veteran’s Resource Center

This bridge program brought together veterans who are currently students at Rhode Island universities and colleges, among them Brown University, Bryant College, the Rhode Island School of Design, Rhode Island College and the Community College of Rhode Island. Drawing on a core reading list that included books on the early 19th-century Peninsular War, the Anglo-Boer War of 1899-1902, and the Vietnam War, the sessions modeled the seminar form that student-veterans will encounter in humanities during their university career, as well as providing a practical, “hands-on” introduction to key resources for the study of the humanities. The goal was to equip participants with the skills and knowledge to navigate the demands and expectations of the critical study of the humanities, as well as establishing an informal advising or mentoring relationship with their discussion leaders (faculty and veterans), to serve as additional ongoing resource.

Fostering Dialogue on the Experiences of War

This two-week seminar at Brown University included faculty and advanced graduate students at RI higher education institutions, and veterans from the university and broader communities. Drawing on the expertise of the group itself and of several guest speakers, participants were provided with training and experience in leading discussions of war with warriors which engage with the humanities. They devoted close attention to warrior experience, building out from this to engage with quandaries, multiple viewpoints, and cross-temporal and geographical comparisons as a means to advance the habits of critical thinking at the heart of the humanities. This program was envisaged as a form of “boot camp” in effective communication across the civil-military divide.