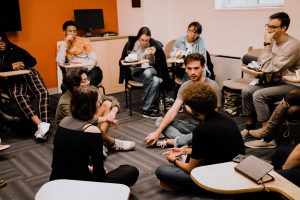 What is Transformative Justice?

In practical terms Transformative Justice (TJ)  is “a liberatory approach to violence…[which] seeks safety and accountability without relying on alienation, punishment, or State or systemic violence, including incarceration or policing.” It is a set of practices  for responding to interpersonal and structural violence that relies on community relationships to protect the safety and needs of survivors, while building systems of support and accountability for those who have caused and enabled harm.

As a political commitment and practice, Transformative Justice comes out of organizing movements and “marginalized communities, including Black, immigrant undocumented, queer and trans,  and indigenous communities who have built networks of mutual support as a way to survive and transform state and interpersonal violence. In the US, Black women in particular have been at the forefront of developing Transformative Justice and community accountability frameworks for ending gender-based violence outside of a penal system that has long exacted violence on Black and brown communities.”

However, Transformative Justice is not just a political orientation, it is a way of being and moving through the world. One of the core tenets of TJ is its emphasis on living this practice in our relationships, which has derived from indigenous teachings from many different parts of the world, particularly North America.  When we choose to embody TJ, we:

Transformative Justice is explicitly a values based framework. Some of the core values that guide our work as TJ practitioners are: