1. The following ethogram contains a series of brief observations of Sciurus carolinensis, a rodent native to eastern and midwestern North America commonly known as the eastern grey squirrel. Observations were made for approximately 20 minutes (from Sunday, 10 Feb 2019 13:30 to 13:50 EST) in Ruth J. Simmons Quadrangle located at the heart of Brown University campus in Providence, RI. The report consists of three parts, each discussing the (i) the environmental conditions of the site in which the observation was made, (ii) the physical characteristics of the subject and (iii) the specific behaviors demonstrated by the subject within the 20-minute time frame. 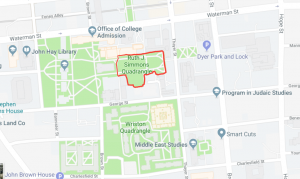 Ruth J. Simmons Quadrangle is a largely open area consisting of a grass field and a few hardwood trees. Although not a mature forest / woodland environment generally favored by the organism, the site has moderate vegetation coverage spaced throughout a rectangular area of about 0.5 acres, which is sufficient enough to attract at least a few numbers of squirrels. About ten people were present in the area by the time the observation was made. Since the squirrels demonstrated a keen awareness to the people present as they swiftly ran away whenever a person approached them, showing a clear tendency to avoid direct interspecific contact, a minimum distance of 20-25 ft was maintained from the individual subject during the observation.

The subject (Sciurus carolinensis) has a pale grey colored body that is about 15 to 20 inches long with a bushy, grizzled dark tail curved downwards. Its ear, sharp towards the edge and slightly spiked upwards, is roughly an inch long. Its hind leg is distinguished by a thick, muscular, oval-shaped thigh and ranges from 2 to 3 inches in length depending on the posture. The legs keep the entire body in balance.

As it seems rather counterproductive to record the subject’s behavior in a moment-by-moment basis, I have categorized its behavior into 2 types and included a graph indicating the percent of time allocated to each behavior during the 20-minute observation period: 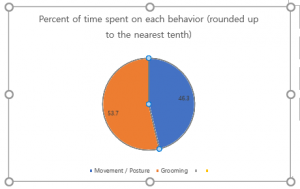 A. Movement / Posture – The category indicates visible activities that result in motion or certain physical positions, which specifically include:

Standing: A position in which the body is stretched vertically upwards with both feet on the ground.

Sitting: A position in which the body is facing the ground, the angle between the body and the ground greater than 0˚ and less than 90˚. All four feet are on the ground.

Running: A rapid succession of forward movements whereby the subject dynamically springs off the ground using its rear legs.

Climbing: Vertical movement upwards & downwards along a plane (i.e. a tree) while the subject’s four legs sustain and put the body in constant motion.

Tail Flicking: Successive movement of the tail in either vertical or horizontal directions with varying speed.

B. Grooming – The category includes to any behavior involving physical contact with its own body:

Scratching: An act by which the subject scrapes / successively rubs its own skin using either its front or rear legs. Parts of the body it scratches vary along the dorsal surface.

Licking: The use of tongue to clean its body, usually the frontal limb and upper half of the body.

2. It leaps all over the brilliant field of an obscure college. It traverses the soil and the grasses and the plants and a hammock and then a tree-trunk and the branches. Indeed an embodiment of Chip and Dale’s vigor and Alvin’s mischief. I say squirrel, you say chipmunk; but frankly, who gives a shit.

When leaping becomes a bore, it is not difficult to see the rodent get into a scratching frenzy or a rubbing spree. Spasm spasm spasm. Buzz buzz buzz. Zesty and self-confident, a squirrel knows no limits.

But it is the rare moments of pause and silence that strangely gets me. Its marvel-like eyes staring at thin air, into sheer nothingness, into the deepest hollow. As if the world, strange as a squirrel, is suddenly about to end with a whimper. Through the unfathomable dark of its eyes I see myself staring back at me. With fear I look into me. So does the squirrel.

3. Insofar as ethology is a branch of the biological sciences, I felt obligated to follow a set of “objective” procedures and epistemological principles stipulated by the so-called “scientific” method while I was writing my report. I would characterize the scientific method as being grounded upon two basic premises: (i) that a clear distinction exists between the observer and the observed, subject and object, object and the environment, and that this distinction allows us to obtain reliable knowledge about the external world whose properties are governed by impersonal physical laws, and (ii) that such empirical knowledge helps us extrapolate an ultimate causal explanation of a natural phenomenon. Credibility of my pseudo-ethological report (if there is any) especially relies on first premise here as the behavioral patterns of the squirrel ought to be unaffected by the inner workings of my mind or the physical expressions thereof – it should be the case that I, as a detached observer, did not in any way affect the squirrel and vice versa. While I was unable to give a causal explanation to the squirrel’s behavioral patterns, it seems more or less necessary for an ethologist to hypothesize a certain rationale behind animal behavior: the 2013 paper by Ng et al (“Snails and their trails”) is a good example of a scientific study devoted to this goal, namely to deducing “the ecological and evolutionary rationales for train-following in gastropods” through an extensive literature review. Yet the readings offered in the course thus far challenges my belief in these two premises: Despret shows how the outcome of an animal experiment can be rendered merely self-referential (often without being noticed) by an emotional feedback loop formed between a human subject and a non-human object, and Latour calls into question the scientific belief in causality and certitude by arguing that existence is a relative concept contingent on the sociocultural context of a given spatio-temporality.

While writing as a poet, on the contrary, I was able to situate my observations within a more intimate personal context, freely drawing on my own sentiment and memories emerging from sensorial input. I needed not maintain a coherent logical flow when expressing my personal understanding of animal behavior, meaning that I was able to transcend the preconceived subject-object boundary between me and the squirrel. As was the case for the Ponge and Uexküll, this enables a unique experience of taking on a perspective of a non-human entity, which is not quantifiable through the scientific method but only accessible through poetic imagination.