By examining two Supreme Court cases that stand a decade apart—Grutter vs. Bollinger and Students for Fair Admissions v. Harvard—this article seeks to position the rise of the “Asian American Right” in the public sphere (or more so the public display of its sentiments) at the center of the current debate around Affirmative Action. Three factors, all of which are present in both cases, will be critically analyzed: the demographic behind the plaintiffs and the coalitions that back them, the exhaustive, passionate, and ironically similar arguments that are used both for and against affirmative action, and the conversation around colorblindness, another form of erasure. Why do Asian Americans, specifically immigrant, 1st-gen, middle to upper class groups, tend to side with the oppressors? How should the increasing rift within Asian Americans and other minority groups be examined? How far back must be go in order to examine it? Asian Americans have historically shied away from the spotlight, especially regarding politics in the US. However, they have consistently suffered from the history (and continuation) of racism and social inequality in this country. While the Trump presidency has instilled fear among all demographics, the sentiments exist and are played out on variant levels. How does the element of fear and fragility play into the issue we have at hand, into the communities that are the plaintiffs in these cases against affirmative action? Affirmative action has long divided the court, it’s people, and minority groups in the US; this article recognizes that the questions posed will conceivably warrant sundry answers and will consider a motley of factors. Where appropriate, this article will also draw on various court cases that fall within the timeline, the critical writing done about them, as well as contemporary reportage and Op-Eds w/r/t this topic. 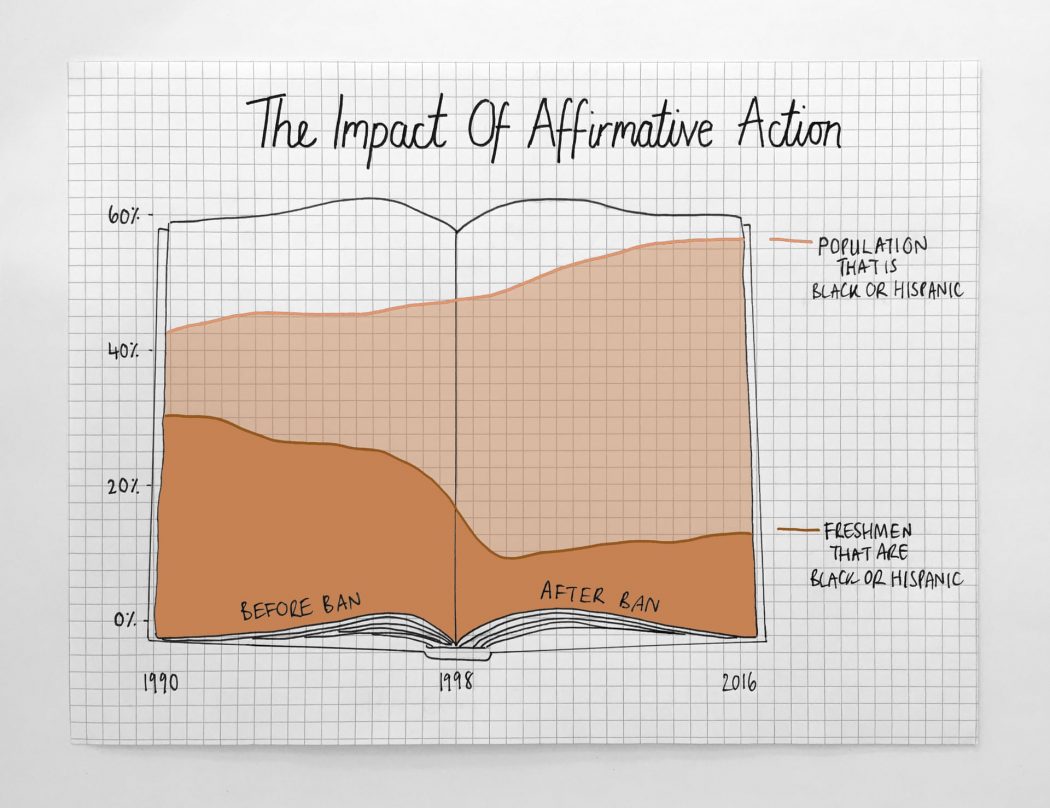 Figure: University of California, Berkley admissions before and after a ban on affirmative action. / Illustration: Mona Chalabi for The Guardian