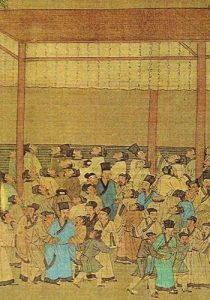 To answer the question, we must explore the historical and contemporary structures that have built and sustained this obsession. Most are familiar with the historical; in ancient Southeastern cultures such as China, Korea, and Japan, the most efficient way for a common man to advance into the upper class was through academic success (History of Education in China). In particular, the civil service examination in imperial China served as an important vehicle for social mobility (The Confucian Classics & The Civil Service Examinations). Even someone from the poorest family could, in theory, become a member of the educated elite by succeeding in the civil examination system (The Confucian Classics & The Civil Service Examinations). The civil service examination established a firm belief in meritocracy throughout the country, and helped circulate key ideas of Confucianism– concerning proper behavior, rituals, relationships, etc.– through all levels of Chinese society (The Confucian Classics & The Civil Service Examinations). Notably, meritocracy was not only inherent to the administration of education, but also to Confucianism itself (History of Education in China). Similar civil service examination systems existed across Southeast Asia, giving rise to the strong Asian emphasis on education, and its association with social mobility and success.

The legacy of this highly meritocratic system extends to the modern Southeast Asian state education. Both my parents received the bulk of their education in Taiwan, but travelled to the United States for graduate school. Their experience of the American education system provided them perspective on their Taiwanese schooling, and gave them a basis for comparison that concluded with a largely negative view of their Taiwanese education. Don’t get me wrong, they love Taiwan (as do I!), but they have many a time berated the system. To be placed into a high school, students must take a placement test; to be placed into the best high schools; however, students must score within the top percentile. The same admissions process is extended to college applications, where the college entrance examination GSAT is the largest determinant of whether an applicant is “eligible” for the top universities. The emphasis on tests has produced the perspective that success can be always be quantified to a test score, percentile, or ranking. This numerical reductionism of achievement leads us to both the Asian obsession with the Ivy League and frustrations with the admissions process. I grew up in Taiwan, and I cannot name how many times I’ve seen a bus full of preschoolers drive by with the name “Stanford Kindergarten” emblazoned across the back. Countless primary and secondary schools and cram schools are named in homage of Stanford, Berkeley, and Harvard, reflecting the obsession with top-tier universities.

It is important to note that the Asian Americans suing Harvard are not only driven by an obsession with top-tier colleges, but by frustrations with the system. American college admissions are driven by a process that is not number based, and seeks to assess unquantifiable aspects of the applicant, like personality. Accustomed to quantifying merit, the Asian Americans suing Harvard were frustrated when their stats (i.e., test scores, GPA) were believed to be adequate for admission. East Asian countries respond with further attempts to quantify the admissions process; I have heard of numerous bootcamps and services exist that offer to write your application essays for you, out of the belief that there must be some algorithm that drives the process.

So we’ve shown that the Asian American obsession with elite institutions like Harvard is partially driven by a cultural emphasis on rank. I can personally attest to this; I, like my parents, received my primary and secondary education in Taiwan, though I attended international schools. I was an anomaly for wanting to attend Brown; typical dream schools were Harvard, Princeton, Yale, MIT, and Stanford, driven solely by the informative and not at all tenuous U.S. News Rankings. And despite being quite the Asian American “maverick”, I still find myself at times irked by Brown’s consistent 10+ ranking. I am not proud of it.

It is widely believed that this is the byproduct of collectivist East Asian cultures (Wong). Common perceptions of what distinguishes East Asian cultures from their white counterparts is collectivism (Wong). East Asians are seen as collectivists, valuing humility and collective harmony, striving to make decisions based on common good over personal gain (Wong). But, white people are known to be more individualistic, striving to distinguish themselves by competing with their peers, and to make decisions driven by personal gain (Wong). From this comes the expectation that East Asians assess themselves relative to their larger social group, while European Americans assess themselves relative to the performance of their peers within the group (Wong). This collectivism is widely believed to drive the East Asian obsession with elite institutions like Harvard; East Asians address themselves relative to their peers, so if their peers are all high performing, Harvard-educated individuals, they are more likely to see themselves as such (Wong). So goes the Chinese saying “it’s better to be the head of a chicken than the tail of a phoenix,” yet 75% of East Asian respondents, most of whom were born in the US or emigrated to the US at a young age, would choose to be the tail of a phoenix, versus just 59% of European Americans (Wu).

Though the cultural stereotype of collectivism is widely credited as responsible for the 75%,  research conducted by Kaidi Wu, a graduate student at the University of Michigan, shows otherwise. Her work points to the fact that East Asian cultures are “face” cultures (Wu). In “face” cultures, “it’s not only important for you to know that you are doing well, it’s also really important for other people—a stranger on the street, a relative, an employer who takes five minutes to glance through your resume—to evaluate you and think of you as this person who’s coming from a really good place. … Your evaluation is predicated on what other people think of you” (Wu). Wu’s study suggests that the prestige sought by East Asian students are defined by the titles they hold, or where they go to school, as opposed to how they perform relative to their peers (Wong).

It is unfair to draw generalizations from a pool of predominantly American Asians. Wu’s second study polls mainland Chinese respondents on the chicken v. phoenix analogy (Wu). The results from the second study mirrors those of the first; again, asian participants were more likely to choose to be the tail of a phoenix (Wu).

It is cathartic to finally be able to put words to my lived experiences. It has bothered me that Brown is relatively obscure in the Taiwanese American community I was raised in. It is a university hardly anyone recognizes in Taiwan, and I find myself trying to explain Brown and its “prestige” to those who do not know about it. And then it bothered me that it bothered me. I confess to having felt the need to be recognized as a member of a glorified “elite” education institution, but it is comforting to know that at least part of that need can be attributed to the system I was raised in.

So in conclusion, we must consider both historical and contemporary data to comprehend why we are at this historical moment in time, where a faction of Asian Americans are suing Harvard for discrimination. It is a culmination of a belief in a meritocracy that has been perpetrated generation after generation, through complex mechanisms of both practice and theory. This has led to an infatuation in elite academic institutions, and a fundamental misunderstanding of what comprises the American college admissions process, that compounds the cultural hurt and anger driving the lawsuit. But, the Asian-American obsession with top-tier universities need to stop. As Asian-Americans, we desire respect, and we strive to achieve that by branding ourselves according to our colleges (Chan). Though we give the impression of academic success, we cement our failure to assimilate with American mainstream culture (Chan). These brand-name, top-tier schools do not do anything to elevate our social standing, but only establish us as aliens in America.