Four years ago, this time of year, if you had told me that my admission to Brown University was contingent on a mechanism resembling upper limit quotas on Asian American admissions, I would have been heartbroken. Who knows, maybe I could have even cried foul like the students who are suing Harvard. I still remember—was it December 11?—I opened the online self-service portal for the university and incessantly checked my admissions decision because I was afraid to wrongly believe that I had been admitted.

Diversity was the reason why I chose Brown. My story is one of the tropes of students that attend liberal elite institutions. Unable to find belonging in my small, predominantly white suburban and conservative town since elementary school, I sought refuge in dreams for the next chapter of my life. And at my first week of college orientation in Providence, Rhode Island, I realized those dreams at the Third World Transition Program (TWTP)—never had I been in a hall with so many students of color. I felt overwhelming joy, wonder, and acceptance.

Diversity is also why higher education utilizes affirmative action or considers race in admissions. First, affirmative action is used to redress the historical injustices and discrimination that previously barred marginalized groups from entering spaces like universities and workplaces. Second, race-conscious admissions strive to level the playing field of the present; policies aim to provide underprivileged students with more opportunities and access to social mobility—access other students are born into. Finally, the diversity argument also has a consequentialist feeling; universities seek leaders of all backgrounds, colors, and identities because they believe that better representation will improve society.

Unfortunately, the diversity for which I chose Brown and the opportunities given to historically marginalized students through affirmative action are being threatened. On Monday, October 15, 2018, a group of Asian American students claimed that Harvard intentionally discriminated against Asian applicants and violated the Civil Rights Act in the case Students for Fair Admissions v. Harvard (Anderson). Led by conservative activist Edward Blum, Students for Fair Admissions claims that Harvard discriminates against Asian Americans by giving them “significantly lower ratings for subjective personal qualities, including leadership and compassion, than applicants from other racial groups” (Anderson). The Trump administration’s Justice Department also supports SFFA (Chang). The federal case’s implications are far-reaching and presiding U.S. District Judge Allison D. Burroughs will give a critical decision. 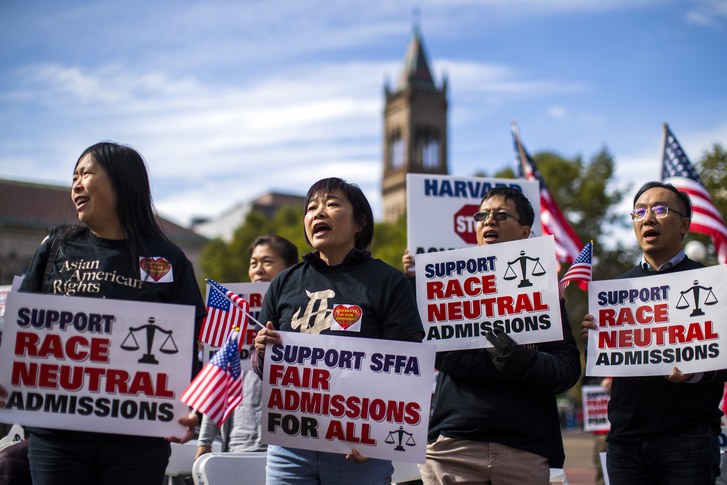 This is case is particularly unique because Asian American students are leading the fight against race-conscious admissions, a battle typically waged by white students. White applicants have previously challenged affirmative action in the courts (Anderson). In Regents of University of California v. Bakke (1978), a white male applicant to the University of California at Davis Medical School claimed that his rights had been violated due to discrimination against his race (Tsuang 659). The case cited the equal protection clause of the Fourteenth Amendment and Title VI of the Civil Rights Act (1964). Though the Court ruled that Davis’s admissions quota was unconstitutional, it deemed that race could be used in admissions decisions (Tsuang 659). In Grutter v. Bollinger (2003), the Supreme Court ruled once again that the University of Michigan law school’s consideration of race in admissions was constitutional (Chang). In Fisher v. University of Texas at Austin (2016), the Supreme Court upheld the use of race in holistic admissions processes and ruled against Abigail Fisher’s claims of injustice. The Court reasoned that race-conscious admissions were constitutional and did not violate the Equal Protection Clause (Hinger). Though specific factors of affirmative action policies have been judged as unconstitutional, the consideration of race in admissions still holds.

Edward Blum, similar to white applicants, has an extensive history in challenging racial factors in American policies (Waldan). The conservative legal activist’s chief objective in the litigation he engineers is to outlaw and end racial preferences. He does this by mobilizing litigation involving the Voting Rights Act and recently, affirmative action. In Shelby v. Holder (2013), Blum argued that key voting rights protections that allowed racial minorities better enfranchisement were no longer necessary (Hinger). He prevailed, and further disenfranchised voters of color. In other words, Blum’s actions aim to strip racial justice programs of their power by claiming “reverse racism.”

This year’s Harvard case is the most concerning, not in its current state, but due to its future implications. Presently, five conservative justices sit on the Supreme Court, which means that they have the power to end affirmative action in university admissions if the opportunity presents itself (Waldman). In Fisher v. University of Texas at Austin (2016), Justices Clarence Thomas, Samuel A. Alito Jr., and Chief Justice John G. Roberts Jr. wrote the dissenting opinion; they did not condone the consideration of race in university admissions (Waldman). Now in 2018, Justices Neil M. Gorsuch and Brett M. Kavanaugh could easily help write a majority opinion barring affirmative action in higher education. And if Students for Fair Admissions (SFFA) and Edward Blum lose Students for Fair Admissions v. Harvard, it is very possible that this case will be appealed to the Supreme Court.

If race is completely removed from the admissions process, this will directly impact the college admissions of other marginalized groups. Underprivileged students are affected by “biased admissions criteria, unequal K-12 educational opportunity, and the continuing effects of implicit bias,” attorney Adam Fernandez of the Mexican American Legal Defense and Educational Fund (MALDEF) says (Inouye). Removing race-conscious admissions increases barriers of entry for students without resources and privilege. Furthermore, following the affirmative action loss of Gratz v. Bollinger (in which the court ruled that undergraduate admissions at the University of Michigan violated the equal protection clause of the Fourteenth Amendment) the University was forced to change its admissions policies (Harris). Consequently, with the combination of Michigan’s Proposition 2, black student enrollment visibly decreased at University of Michigan and has not recovered (Harris).

Prohibiting affirmative action may even reduce the percentage of Asian American students admitted to elite universities. When Proposition 209 (legislation that banned affirmative action in California) was passed, it was celebrated as a victory because Asian student enrollment increased at the competitive UC Berkeley and UCLA. However, researcher and professor OiYan A. Poon found that since Prop 209 was passed in 1996, the Asian American admissions rate at the top California schools has dropped (Chang). Most interestingly, though SFFA v. Harvard centers Asian Americans as the aggrieved parties, analysts demonstrate that the beneficiaries will be predominantly rich and white (Waldman).

In the 1980s, Stanford and Brown admitted to practices that were biased against Asian Americans (Chang). Yet Asian American leaders did not relent to the pressure that discrimination against Asians stemmed from advantageous policies for other racial and ethnic minorities. Asian American professors strongly defended affirmative action. University of California, Berkeley professor L. Ling-Chi Wang said, “At no times has anyone in the Asian American community linked these concerns to the legitimate affirmative action program for the historically discriminated, underrepresented minorities (Chang). Law professor Mari Matsuda concurred, Asians would not serve to “deny educational opportunities to the disadvantaged and to preserve success only for the privileged” (Chang). In other words, these professors refused to let Asian Americans serve wedge politics and deny opportunities to other minorities. Not only can eliminating race from admissions be counterproductive in building a diverse community of students, it can also backfire in increasing the percentage of Asian Americans accepted.

More importantly, Brown has also taught me that so many folks are left out of the equation when it comes to diversity on its campus and on others. In particular, Southeast Asian Americans, refugee students, undocumented students and working-class Asian Americans are unrepresented in the conversation on affirmative action and Asian Americans. In fact, we must disaggregate different Asian ethnic, affinity, and advocacy groups and their positions in this matter. According to Colorado State University professor OiYan Poon, “there is a wealthier, very small, and extremely vocal group of Asians who are on board—and very willing to play the part” against race-conscious admissions (Chang). What is more, Asian advocates against race in admissions tend to be first-generation immigrants from mainland China (Chang). But the particular anti-affirmative action Asian American advocates hardly represent the diversity of the Asian population in the United States. 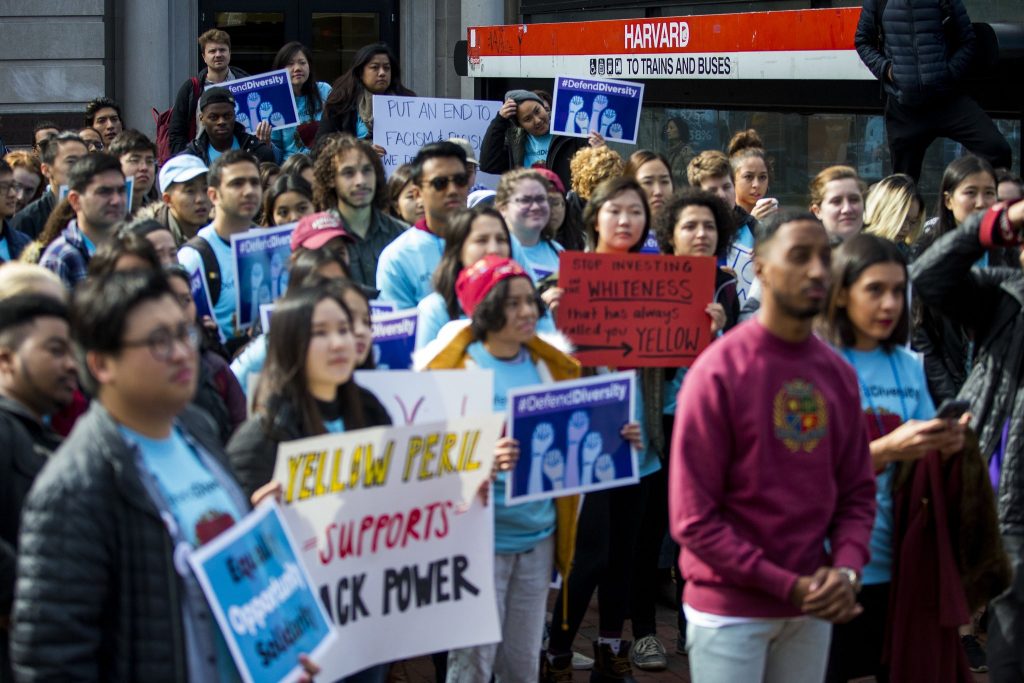 What are other avenues in which Asian Americans can advocate for more diversity and representation in college admissions that would not challenge crucial civil rights legislation? Over 135 Asian American and Pacific Islander organizations have joined forces to support affirmative action in higher education and oppose the Harvard case. A more fruitful endeavor would be advocating for the disaggregation of data and consider that working class students, first generation students, and Southeast Asian students are underrepresented in elite institutions.